Madeline by Ludwig Bemelmans (Five in A Row)

“Madeline” is the story of a girl who lives in France. She resides in a boarding school in Paris along with 11 other girls. Madeline is the smallest one but the bravest among them. She is not even afraid to go near the tiger in the zoo! One night, she woke up writhing in pain. The mistress of the house named Madame Clavel went to the girls’ room to check on her. She was then rushed to the hospital where she had her appendix removed. The girls visited Madeline the next day and discovered that not only was she doing well but also enjoying her stay! They were a little envious of her toys and candies, too! 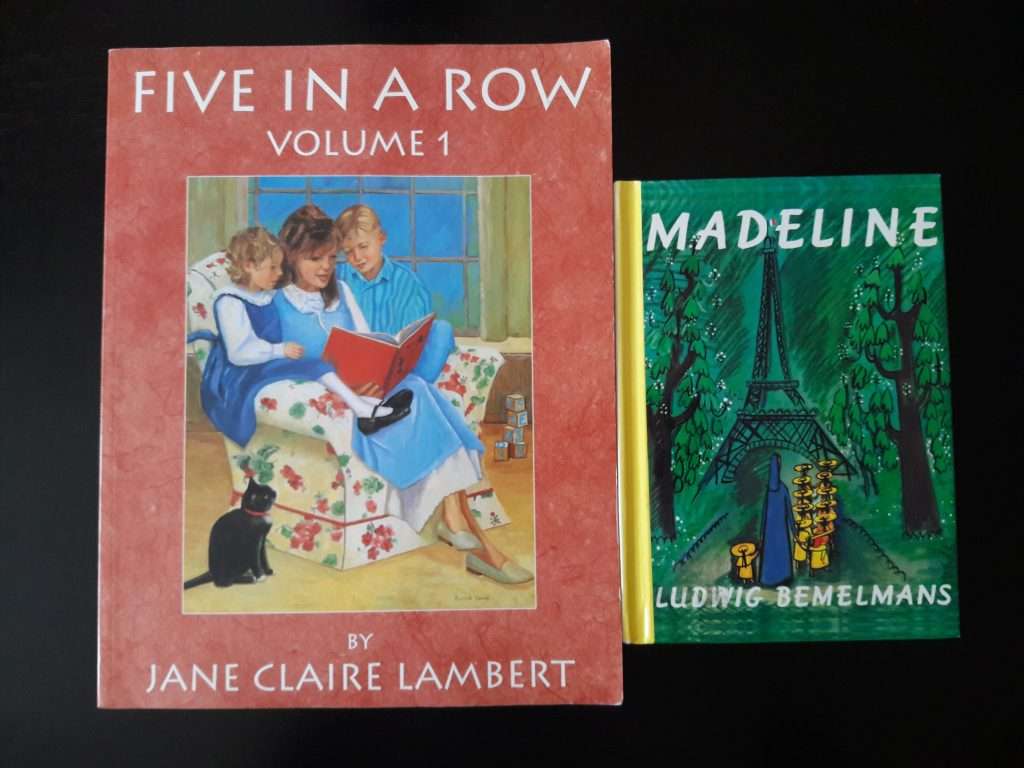 Later that night, Madame Clavel heard the girls crying. Much to her surprise, every one was wailing in pain and wanted to have their appendix removed like Madeline! 🙂 Haha! Too cute! The book is a Caldecott Honor book and the beginning of the many adventures of Madeline and her friends. There are so many things you can do with this book! We really milked it and learned a lot covering different subjects. 🙂

I decided to do a lapbook to put all facts about France in one place. In this blog, I shared how to make a lapbook! 🙂 Timmy helped me by filling in some of the details inside. I got this template from Homeschoolshare.com and you can download it here. 🙂 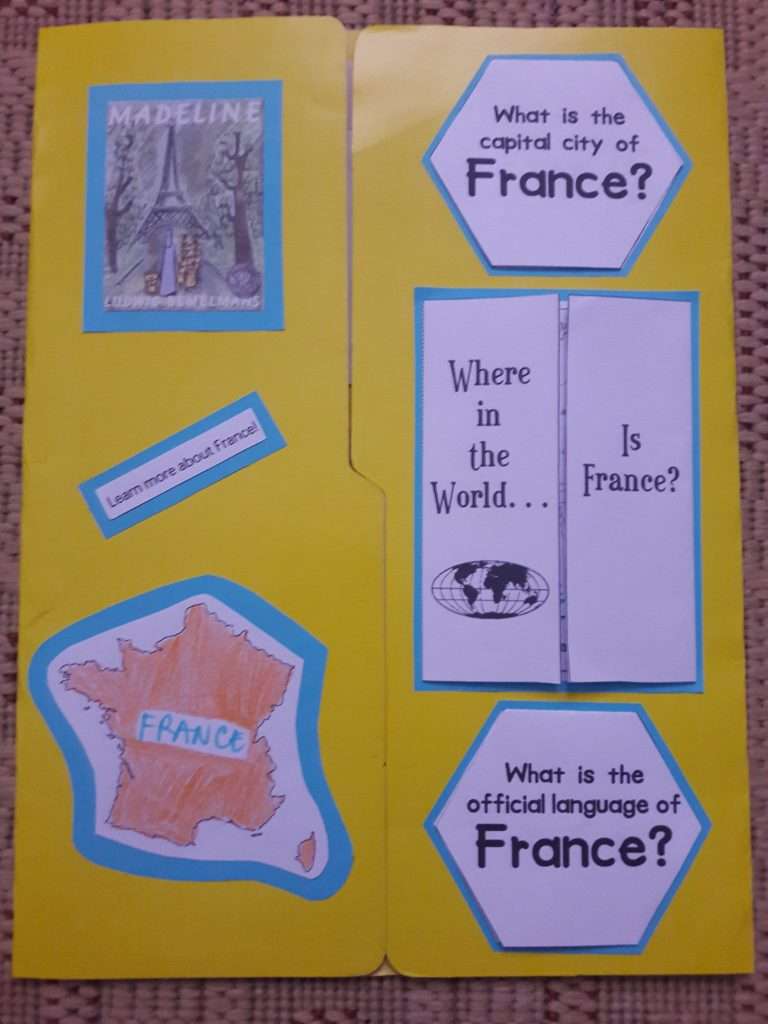 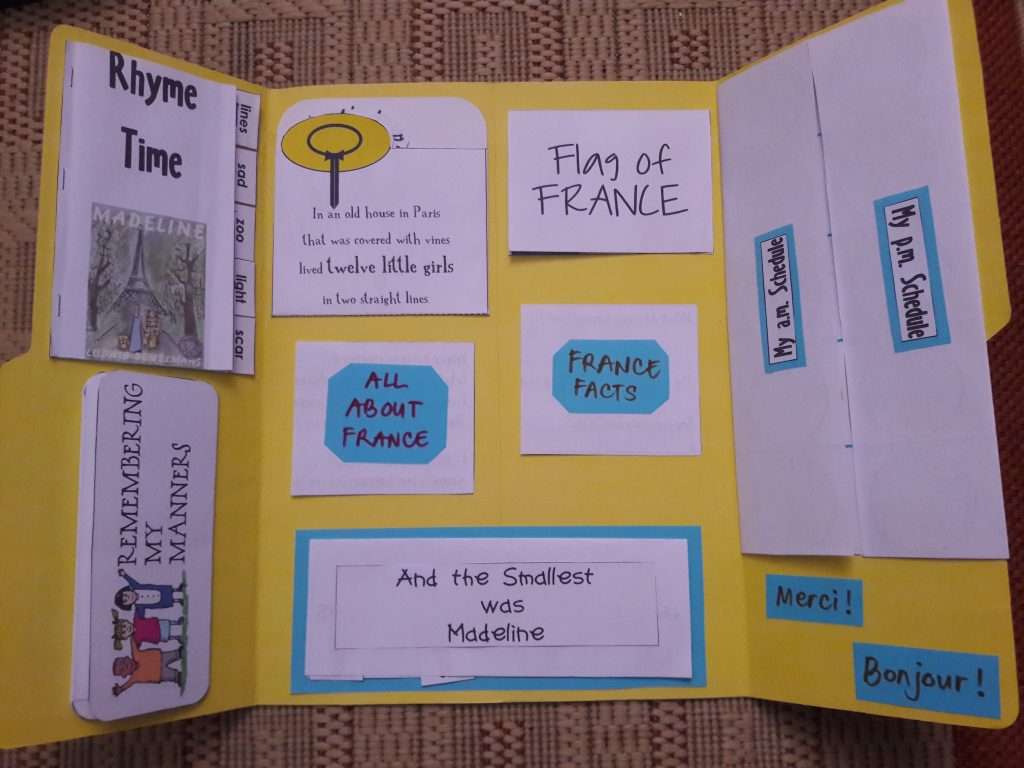 In the book, the 12 girls always leave their boarding school at half past nine. So part of our lapbook was recreating our own schedule and Timmy drew the on the blank clocks to place the time we do our activities every day. 🙂 He also painted the flag of France (He still doesn’t like crayons. Haha!). Timmy then arranged the girls according to size keeping in mind that the smallest one was Madeline. If you’ll notice there, he was pressing the cut out on a sponge. I saw in a mommy-hacks video that you can use sponge for glue so that it won’t be messy. We tried it and it’s really good! Timmy only needed to press and the glue will be squeezed out from the sponge! You can reuse it, too! 🙂 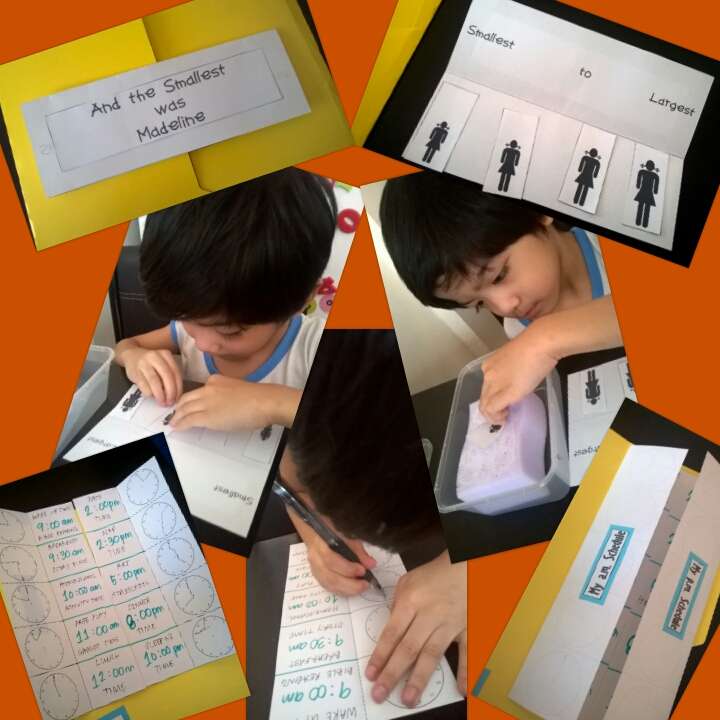 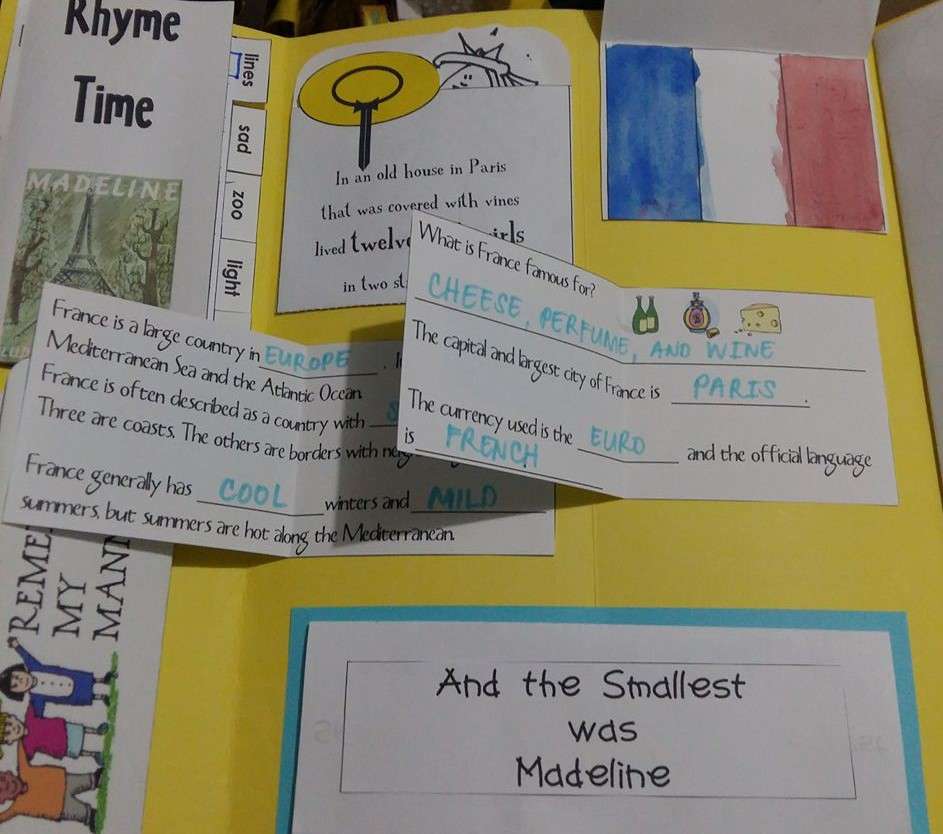 We did some copywork and tracing. I’ve mentioned it already before that my son is not a tracing fan but if he likes what he’s tracing, he happily obliges. 🙂 The line in his copywork was one of our favorites, “They left the house at half past nine / in rain or shine / the smallest one was Madeline.” Such a lovely rhyme! 🙂 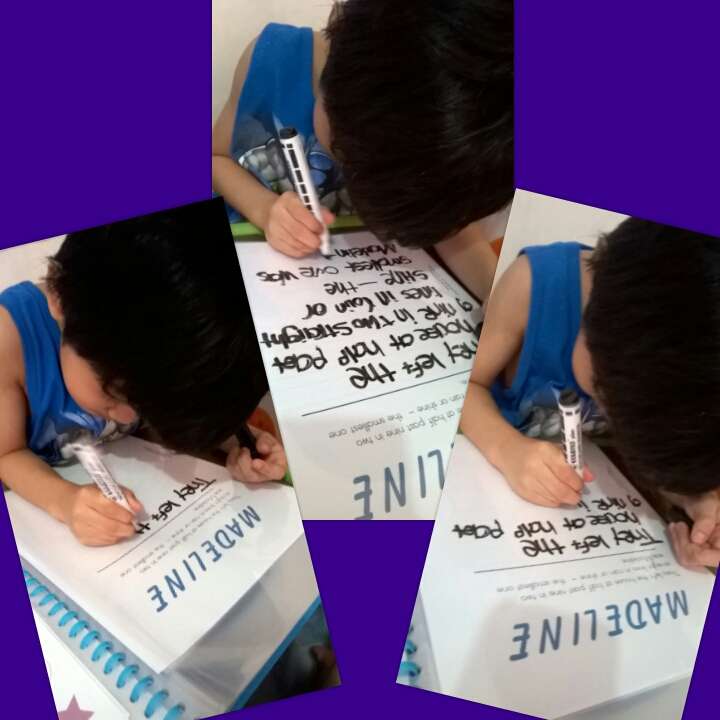 We really loved our art activities that week! We had so much fun that we made three of them! 🙂 First, I taught Timmy the difference between monochromatic and multicolored images. In the book there are monochromatic pages and multicolored ones. Timmy painted two Eiffel towers. One had different shades of blue and the other one had different colors! 🙂 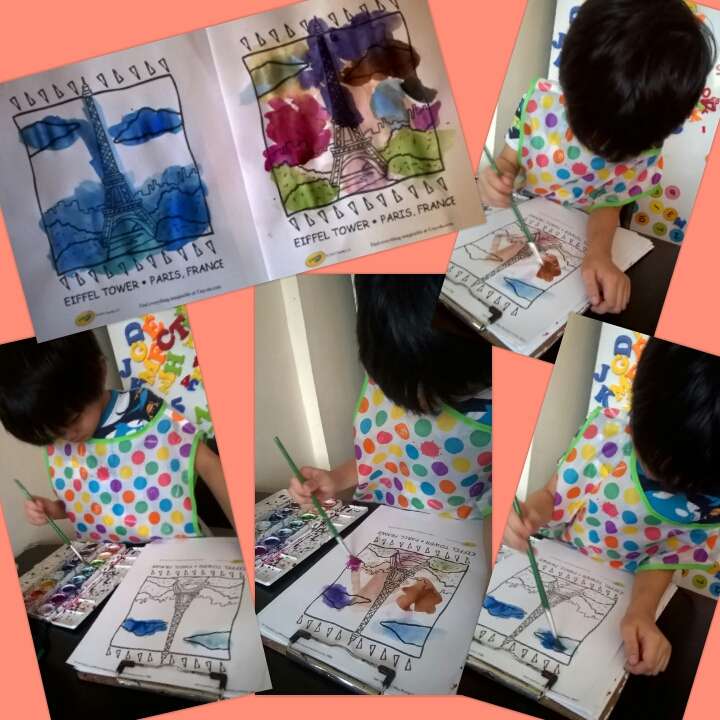 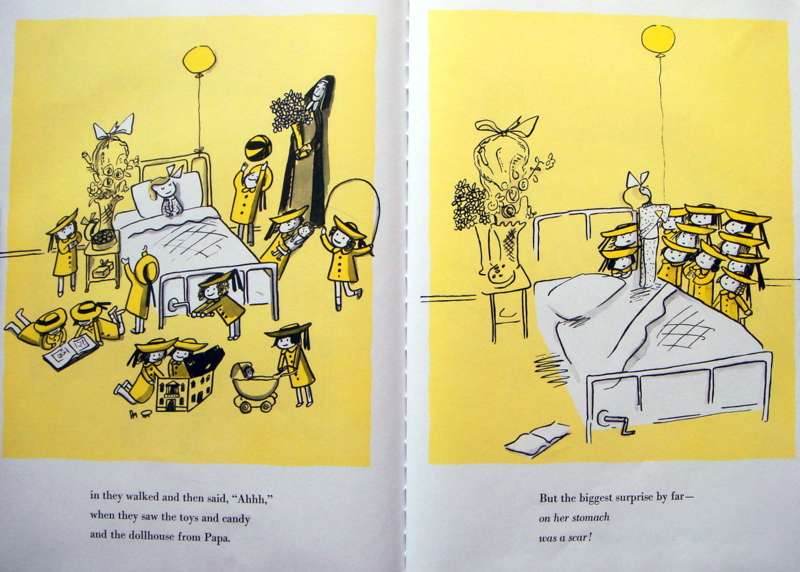 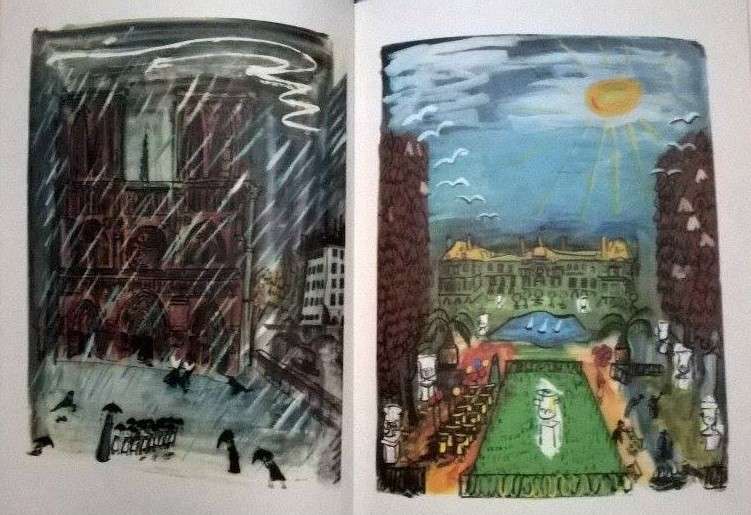 And since we were learning about France, we explored the works of French painter Claude Monet. Timmy recreated one of his popular works “Bridge Over a Pond of Water Lilies.” 🙂 Dabbing paint can take a long time and he  wanted to give up at some point. But he persevered until he finished his painting. The end product was amazing! Good job, Timmy! 🙂 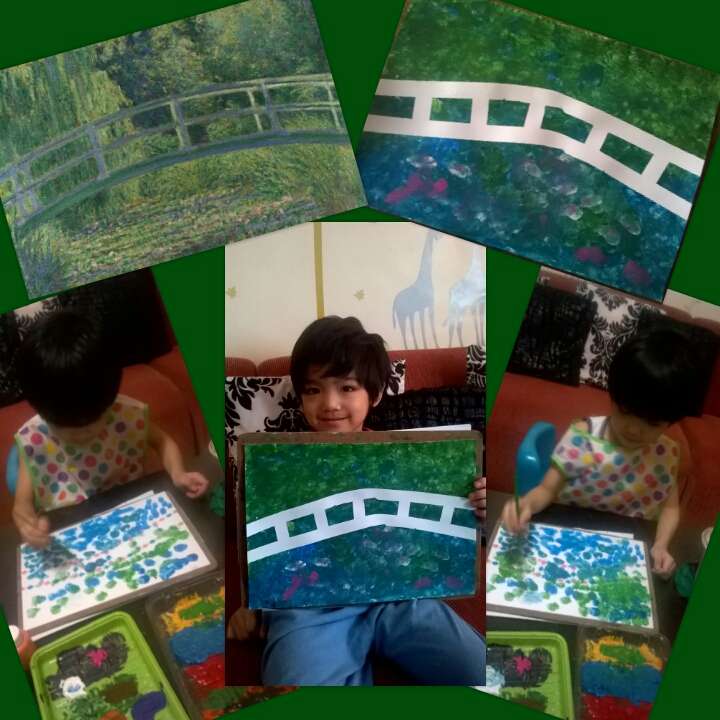 Symmetry also was very evident in the book. To demonstrate the concept of symmetry to Timmy, we made an Eiffel Tower made of wafer! It’s not as high as we wanted it to be but it showed enough symmetry on both sides. 🙂 It was fun to make and eat, too! Haha! 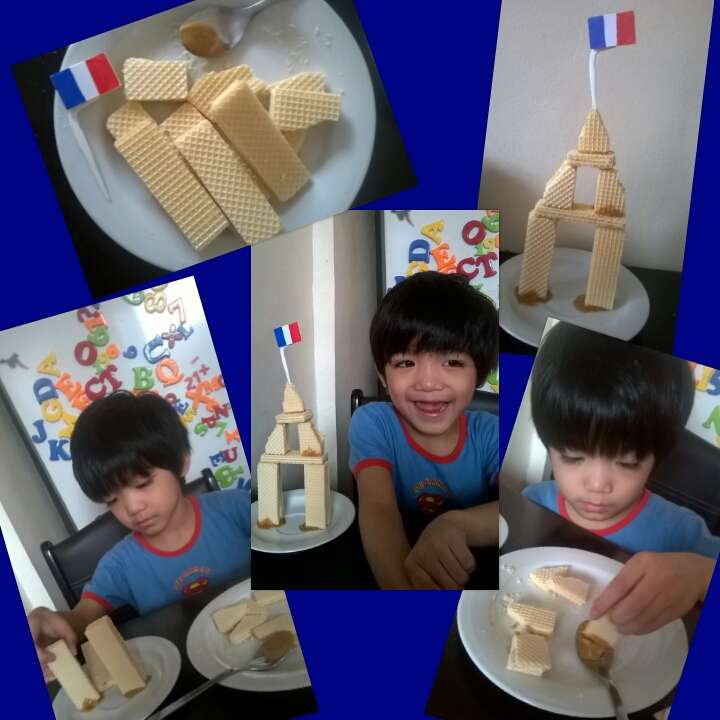 We took a quick tour around France based on the places that Madeline went to. We looked at some of the iconic landmarks in Paris and read some facts about it. We referred to this mini book every time we read “Madeline” so that Timmy got a better picture on what the illustrations looked like in real life. 🙂 We also watched the informative Eiffel Tower video below! 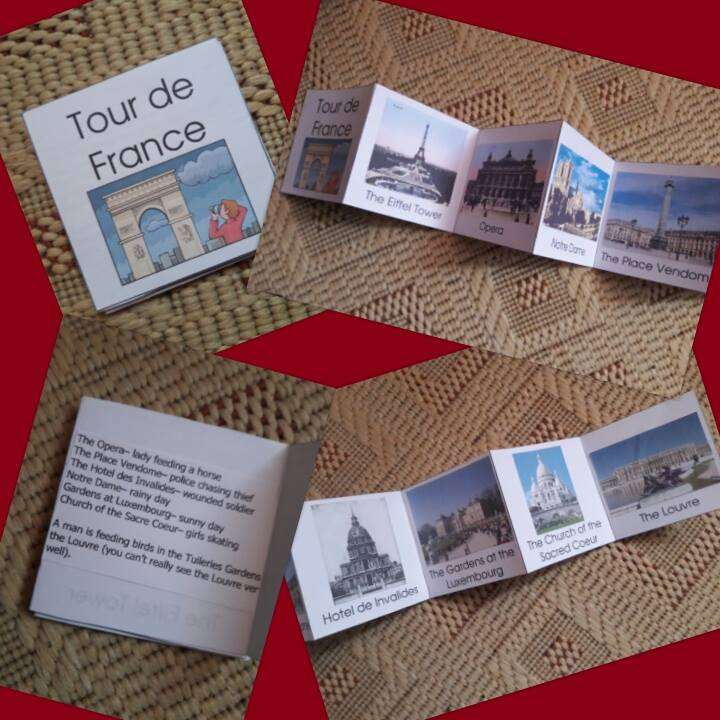 In the story, Madeline had appendicitis. I took this opportunity to introduce the basic organs of the human body to Timmy. Using a brown bag, tissue roll, plastic bags, yarn, and cellophane I made a simple 3D version of his organs. The red pompoms there is the appendix. We also read the book “Inside Your Outside” which is a fun and gentle way of introducing the different organs of the body and their basic functions. 🙂 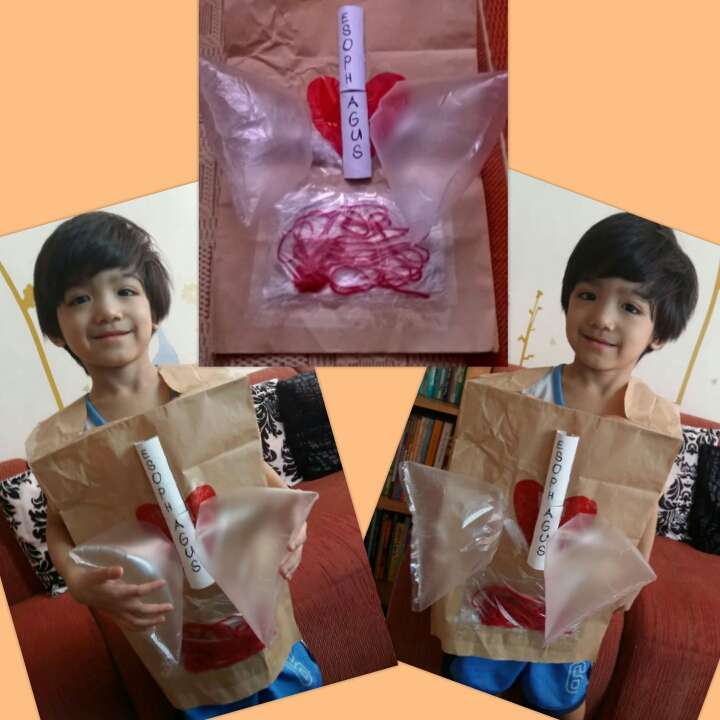 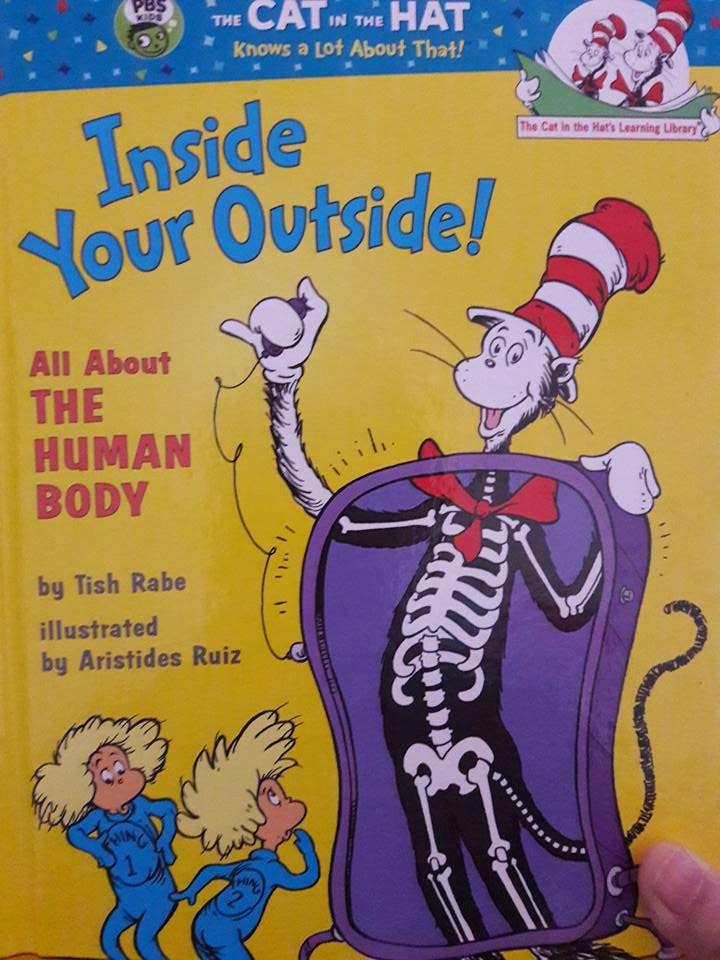 We spent two weeks covering this book because there was so much to learn and explore! Hope you’ll have a great time rowing “Madeline,” too! You can read here for more Five in a Row books and here for some Letter of the Week ideas. See you in my next blog! 🙂