I married a super hero, not a prince charming

Growing up, I totally skipped Barbie, Disney Princess, and other girly fairy tales. I was just not interested in them. I remember that my most loved tales were The Little Red Riding Hood, The Gingerbread Man, Goldilocks and the Three Bears, Hansel and Gretel, Jack and the Beanstalk, and The Three Little Pigs. Haha! I found Snow White and company cute but not as interesting as the stories I mentioned earlier. I jumped into the happily ever after and prince charming bandwagon when I was in Grade 5 or 6. Still, I didn’t find the idea of having a prince charming so charming. I didn’t wear a tiara when I was young except for one school parade when I had no choice.

Judging from the tales I liked back then, I realized that if I’d be in a fairy tale I would probably end up being an adventurous yet accident-prone female character who still needs saving. I would definitely not be a damsel in distress nor would I want a pretty prince charming coming to my rescue with his pearly white teeth. My fairy tale would probably involve an unconventional super hero who will sweep me off my feet with his otherworldly abilities. Lo and behold, I was given one. 🙂

When I first met Omar, I knew that he was more than just a pretty face. Yes, he was and still is prince charming-esque but it was his character that made him more attractive. He was the authentic Mr. Nice Guy with the word KIND tattooed on his forehead. Everybody knew that Omar was dependable and responsible. He was very much like “Superman” in that sense. 🙂 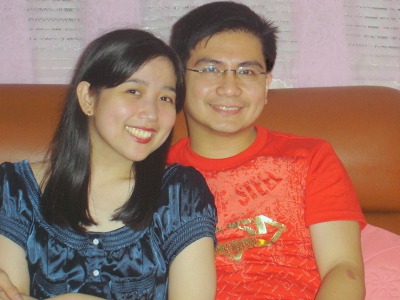 With my Man of Steel 🙂

He also treated everyone equally so it was very hard to determine if he liked you or not. I guess he knew that about himself so when he took me out on our first date he immediately told me his intentions! He dropped the words commitment, marriage, and love that caught me off guard in a blissful kind of way. 🙂 That bold move made all the difference because he unknowingly addressed my fear of being misled. I knew that it took a lot of courage for him to say that. He took the risk of “going too fast” with confidence and determination, fully aware that he could stand by what he said.

To cut the short story even shorter, we became a couple two months after that first date, got engaged four months after, and eventually tied the knot seven months later. 🙂 He is pretty much identical to “Flash” in terms of the way he led and steered our relationship to marriage. 🙂

We also became parents early with our honeymoon baby, Timmy! 🙂 As a husband and father-to-be, Omar balanced his leadership and nurturing role to his preggy wifey. I had a complicated pregnancy and Omar never left my side through it all. When Timmy was born, he took the role of fatherhood with fun and focus. 🙂 I adore seeing him play with our baby, change Timmy’s nappies, and accomplish other daddy duties. He made career and ministry decisions that showed how he is prioritizing us more than anything. For me, he was and still is like a married version of “Captain America,” a great leader, planner, and undeniably selfless.

Our marriage is not perfect.  We have miscommunication issues every now and then. Voice tone misinterpretations also come up once in a while. Overall, I can say that we live by the 80/20 principle. It’s all good 80% of the time. The other 20% comprise the minor arguments, long talks over unresolved issues, and gentle rebukes that help us both become better spouses to each other.

I am so grateful that our marriage is boring (in a good way). 🙂 It is drama-free with no roller coaster mood swings and stress-free with no unreasonable demands. It is a great blessing to be married with Omar who is also peace-loving like me. God knew I could not bear the stress of being with someone who thrives on arguments. Haha!

Today we celebrate our 1,095 days of being married. 🙂 Three years may seem like a short time but the trials we’ve been through made it look like we have a thirty-year-old marriage. Haha! My recent health bout with Ischemia made this anniversary even more precious. God made us more appreciative with every waking day we share together. Seeing how my husband took care of me and Timmy while doing most of the chores at home while I was sick is like seeing God’s love in action. This is what a super hero husband is—someone who knows what to do at the most crucial time, keeps his calm in the midst of a raging storm, depends on Someone greater than he is, and gives his everything without questioning so much what is left of him. 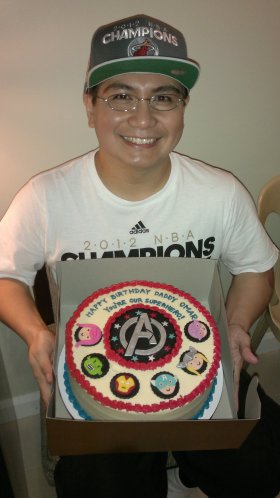 Honey with his superhero cake for his 40th birthday 🙂

HAPPY ANNIVERSARY, MY SUPER OMAR! Human language is not enough to express my appreciation and love for you! You are God’s sweetest blessing to me! I am humbled and privileged to be your wife. My heart is full of thanksgiving to our great God who gives us nothing but the BEST. You are my BEST FRIEND and the no question, hands down the BEST HUSBAND in the world. 🙂 I look forward to more years with you, inclusive of a lifetime buffet of laughter, long walks, movie and series marathons, NBA finals, reading and praying together, family bonding, homeschooling and parenting, lazy afternoons, shopping and window shopping, casual conversations, irrational jokes, sweet surprises, and overdose of hugs and kisses—till we’re both wrinkly and gray. 🙂 I love you, my super hero husband! Happy Anniversary!!! 🙂

HAPPY ANNIVERSARY! I LOVE YOU!