Does Your Child Get Mad When They Find Themselves Messing Up?

Well, mine does. At first it was hard for me to understand why our son reacts negatively whenever he spills his drink or locks the door by accident. All he needed to do was ask for help but instead he would get mad and most of the time end up being disrespectful, raising his voice and answering back.

We do not tolerate disobedience and disrespect in our home thus Timmy gets disciplined whenever he commits any of these two things. He had gone cold turkey with gadgets for a week because of disrespect brought about by his own mess. He got spanked for the same reason in another instance. In our household we abide by Proverbs 13:24 He who withholds his rod hates his son, But he who loves him disciplines him diligently. Our discipline method may vary from time to time. 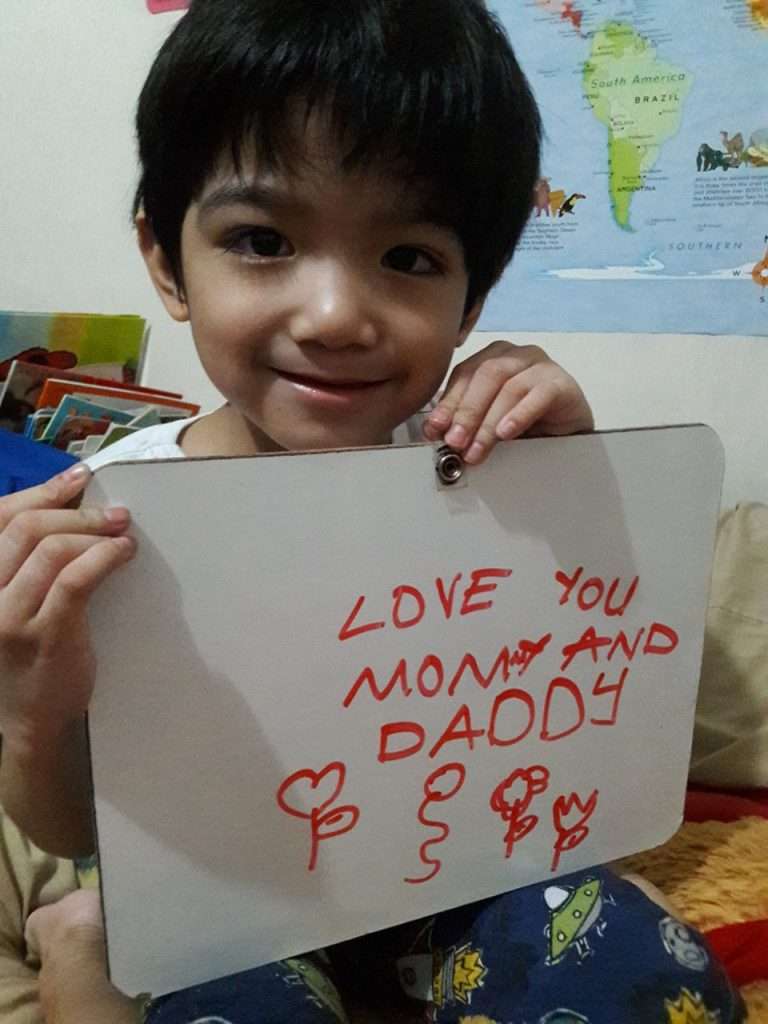 I personally thought that we would never get over this hump. It was discouraging sometimes to see him react that way. But by God’s grace, we have slowly seen changes in our son’s attitude. Here are some of the things I’ve been learning as we go through this character-building stage.

Pray for your child. Cover your little ones with prayers. Our children need it as they grow and mature. Whenever I pray for Timmy’s heart and character, I place my hand on his chest for him to remember that the change we need happens from within. Pray for his struggles and let him hear it. Timmy has heard me ask God to help him control his emotions and not get mad when accidents happen.

Our daily Bible reading always ends in prayer. We pray that Jesus will help us be like the character in the story or that we will learn from the mistakes the person did. I pray for Timmy but I also pray the same for me and my husband. It’s important that our child hears that mommy and daddy also need to change and improve. 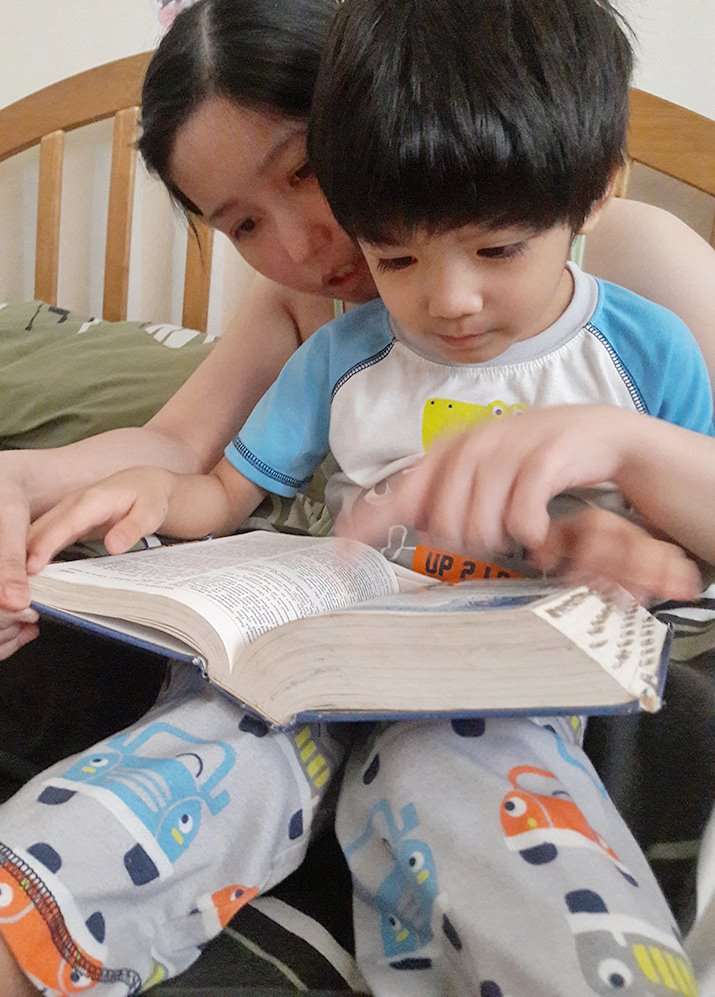 For example in the book of Jonah, we learned that Jonah didn’t obey the first time and opted to go to another place instead of Nineveh. After discussing the story, my prayer went something like “Lord, please help Timmy, mommy, and daddy to obey quickly and without question.” When he noticed this pattern, Timmy also began praying the same way. There was one time he prayed, “Lord, please help us to trust you because you are so, so very good.” 🙂 I actually needed that prayer that particular time! 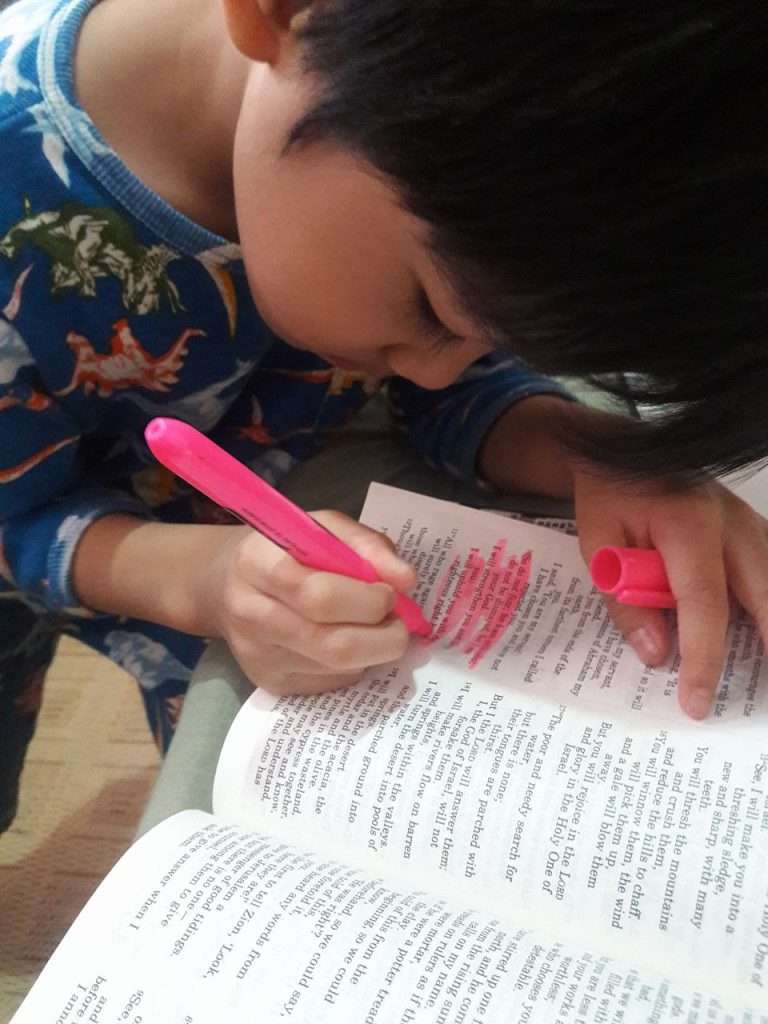 Explain the situation. We had to explain over and over again why he didn’t need to get mad when things like that happen. We told Timmy that what made us upset was his response. For example, he spilled his milk. Of course it’s sticky so we told him not to touch it. Instead, he touched it repeatedly and even stepped on it. When I called his attention that he’s not following, he replied with a loud and stern, “No!” and slapped the table.

Here’s the thing. I only gave him a warning. His response to that was disobedience and disrespect. We even assured him when it spilled that it was okay and we would clean it up. But he still added disrespectful gestures. He had to be disciplined for his response and not over the spilled milk. We had to explain this repeatedly. We even gave examples mommy and daddy do not get mad at each other when we spilled things or accidentally committed mistakes. The change in his response didn’t happen overnight but he eventually got it and even reminds us that he did well by not getting mad. 🙂 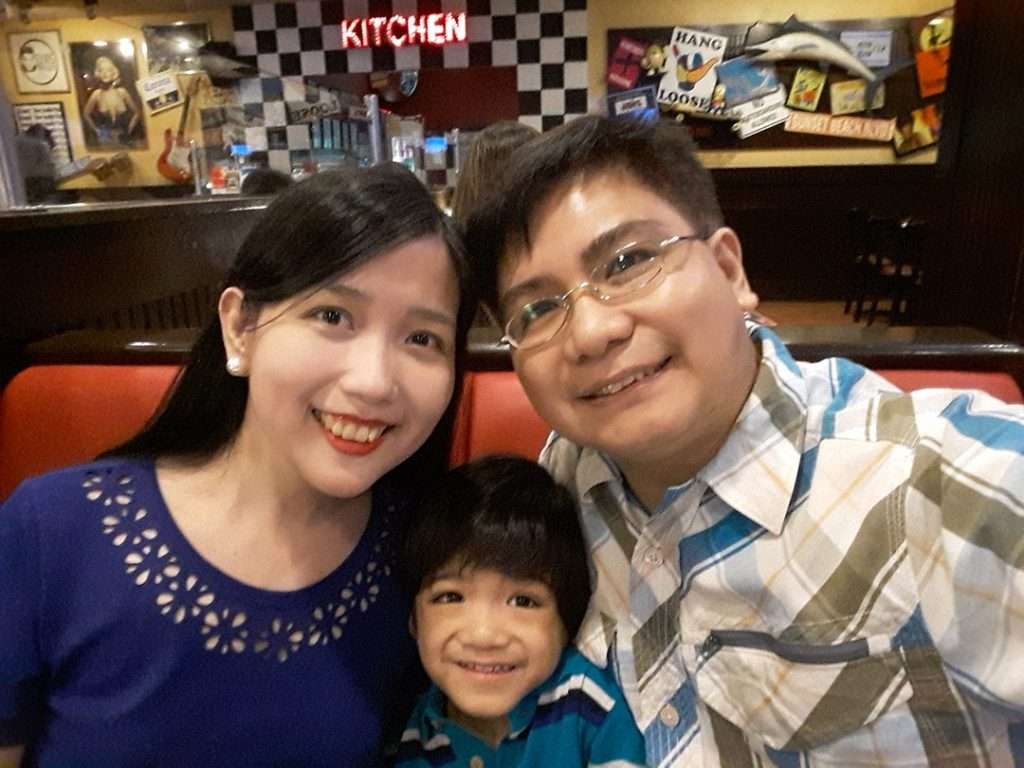 Understand his situation. As a parent, I also had to understand where my son was coming from. Nobody likes to be caught red-handed. Nobody likes getting discovered that they committed a mistake especially if it was unintentional. Same goes with my son. He still has a long way to go when it comes to controlling his emotions and growing in character. I’m 34 years old and I still have a lot of growing up to do. How much more a 5-year-old? God is still molding my character more so my son’s. 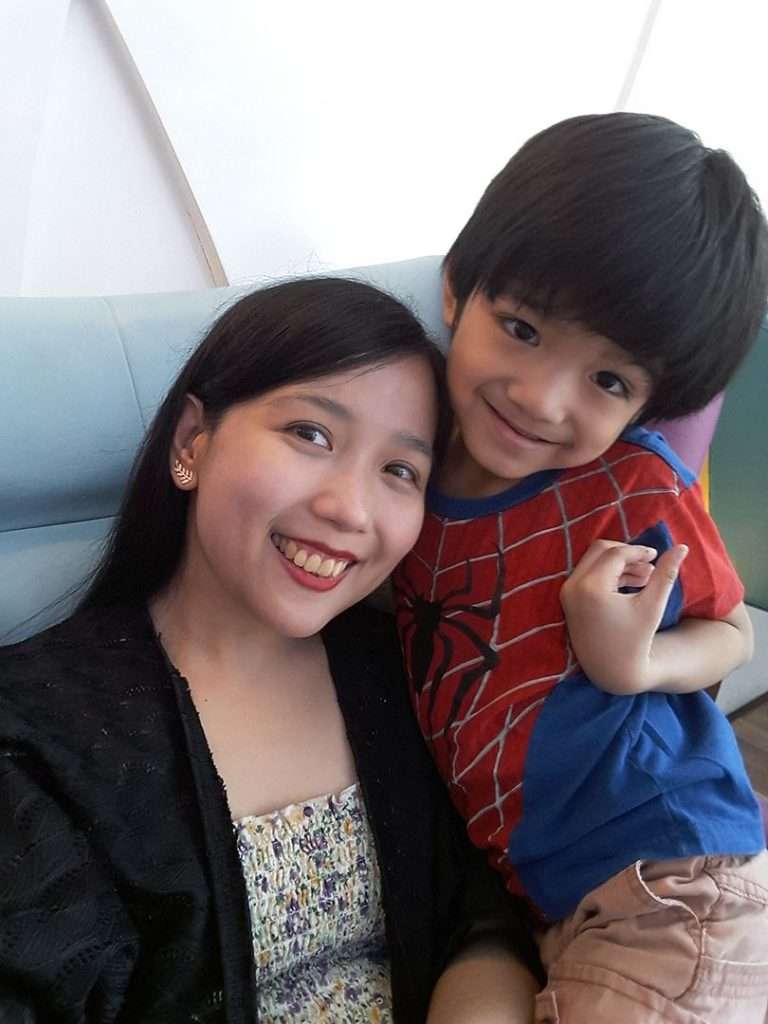 We need to be constantly reminded that we need to be patient with our child’s growth. God has been gracious and patient with us. We should be able to do the same with Timmy. It’s hard but character building is never without tears and trials. Patience can only be increased when you test it. Gentle response is best practiced in tension-filled situations. Even diamonds had to be cut repeatedly to shine.

Compliment your child.  My husband and I were quick to notice the first time Timmy responded calmly. I can’t remember exactly when that happened but when it did our son said, “Mommy, help. It spilled.” I told him, “Wow! That was a great response, Timmy! You didn’t get mad! We’re so proud of you!” 🙂 I saw his face light up and he felt pretty good about himself, too, for responding the right way. We told him something like, “See, we didn’t get mad either because you didn’t disrespect us.” We gave him hugs and kisses as if he won first prize at a competition. Haha! I think we even gave him extra 15 minutes of gadget time because we wanted him to remember that his response was great and worth celebrating. 🙂 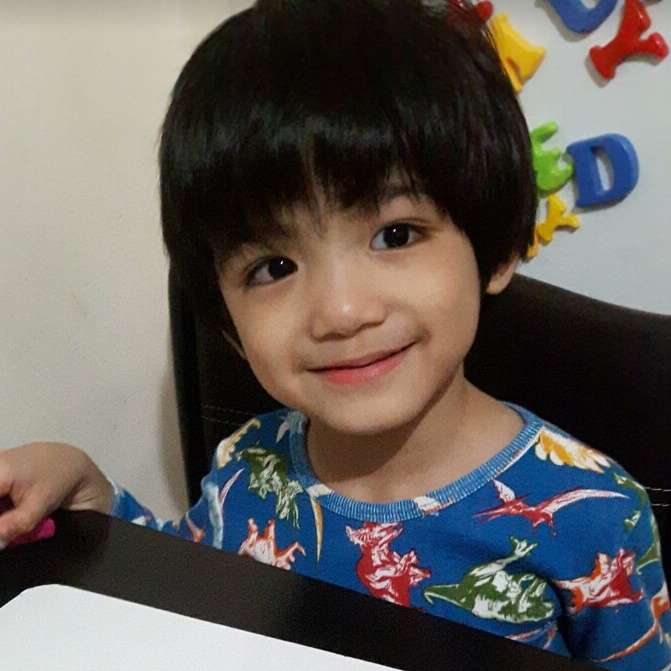 Repeat as needed. There is no guarantee that things like this won’t happen again. Timmy has improved a lot but it also took a lot of praying and explaining every single time. Despite some victories, Timmy also suffered some setbacks. Just yesterday, it happened twice. In the morning he locked the door in the other room. I merely asked him why he locked it and boy did he respond with some kicking and talking back. We had to discipline him for the disrespect he showed. When we were at the “explaining stage” again we cited the incident the previous day when he spilled the bubble liquid on the carpet and he didn’t get upset. We told him that we didn’t get upset either but instead we helped him clean it up and everything was good. 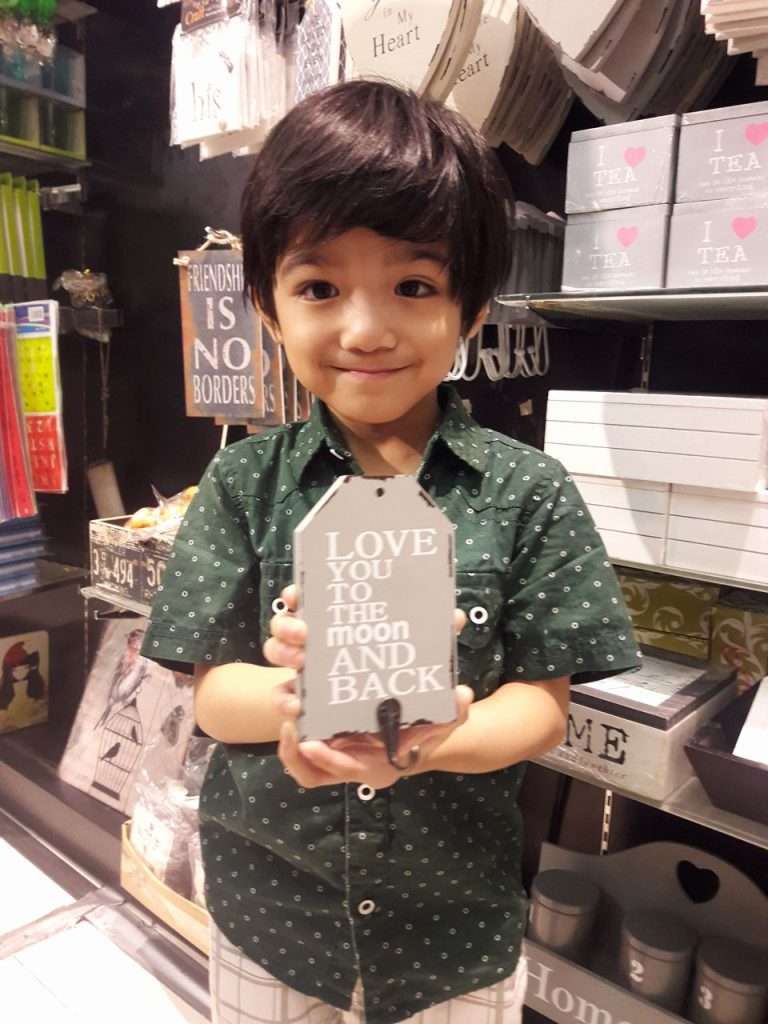 Later that night during dinner, he spilled his juice. This time he simply asked for help and didn’t touch it. He was smiling when he asked me, “Did I not get mad?” I answered him with a big smile, “Yes, sweetheart, you did not get mad. I’m so proud of you!” I saw my son in two different behaviors in the same day. I appreciated that he did better in handling his emotions when a similar incident happened. My son is not perfect and he will never be. Same goes for me and my husband. But he is improving and growing. His controlled and calm responses are getting more frequent and the wild responses are getting fewer. 🙂

It’s much like the way we revert to our old ways during tough situations because it’s more convenient to respond that way—without thinking and without remorse. But despite all that, God never gives up on us. He forgives us every single time. Our “old ways” or sins are even bigger than spilled milk yet God still showers us with grace. We also need to extend the same grace, understanding, and forgiveness to our children and each other. We should never get tired of disciplining, explaining, and nurturing them.

Yes, parenting is hard but when you see your child making incremental improvements and growing in character, it’s very humbling and fulfilling. 🙂