A Day at an Orphanage

Our homeschool group Team L4 decided to have our Christmas party at an orphanage so we can teach our kids the value of sharing to less fortunate children. Working with a group of moms who not only love their kids but also God has been a great privilege for me. I was blessed to see how each one contributed their ideas, time, effort, and skills.

We met and brainstormed after each homeschool M.A.P.E. class and updated each other via our Facebook group and email. Everyone was committed to the task assigned to them. Even our kids were fully engaged, too! 🙂 We decided to have a puppet show depicting the Christmas story and have our kids perform a couple of songs for the orphans.

We chose St. Rita Orphanage in Sucat. They house kids ages 0-2. However, with the adoption process taking so long the kids grow old up to 5 or even 6 years old. I was able to talk to one of the caretakers and she said that each child should first be officially declared as “abandoned” before they become eligible for adoption. It broke my heart to hear that every child in that orphanage is labeled as abandoned. 🙁

No kid deserves to be abandoned much more be officially labeled as one. But then again it had to be done. She said that the DSWD needs to touch base with radio and TV stations if there are people who will claim the child. They have to give it some time if in case the parents or relatives of the child want to take back the child. If no one claims him or her, the child will have an official document that he or she is abandoned and available for adoption. The DSWD will then look for interested parents and screen them accordingly.

Our kids playing while we set up the place 🙂

We all saw God’s faithfulness from our preparations to the people and companies who gave donations (special thanks to Del Monte, Unilever, and Unilab). Our kids even practiced and memorized the John 3:16 song and Joy to the World. 🙂 I’m not sure if we can post photos of the kids but to protect their identity I’ve decided not to post them.

When the kids came down, one girl ran up to me and gave me a big hug! She has the sweetest smile and brightest countenance. 🙂 She even helped one of the moms identify the names of the other kids when she was preparing the name tags for them. I hosted the party and I asked my husband to start the program with a prayer. We then played some games to break the ice. 🙂

My husband leading us in prayer 🙂

For the puppet show, one of the moms graciously volunteered to write the script. 🙂 We had it narrated in Filipino so that the kids will understand it easily. Our children were also working behind the scenes holding the pictures while the story was being told. 🙂 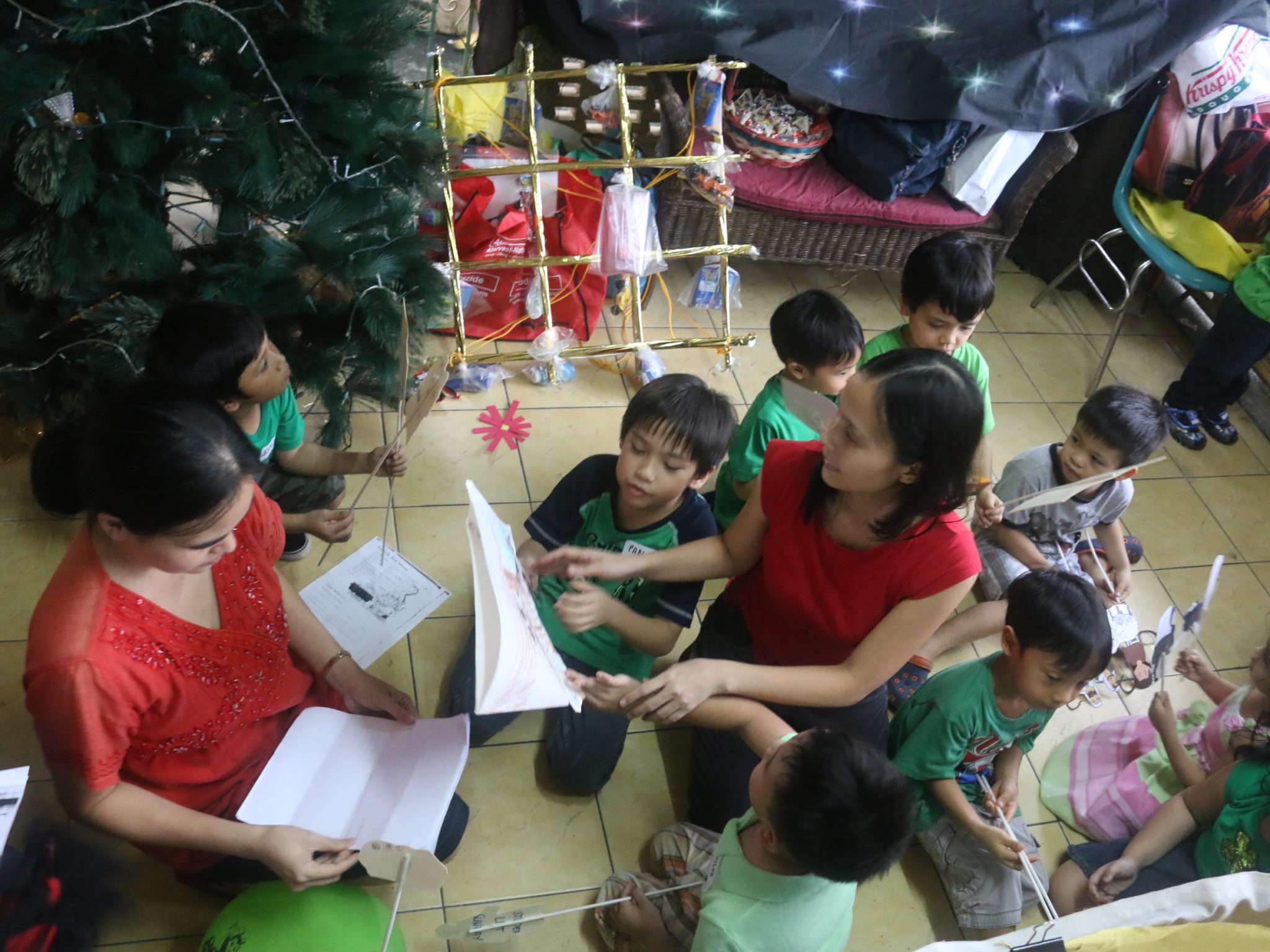 The kids and moms in action 🙂 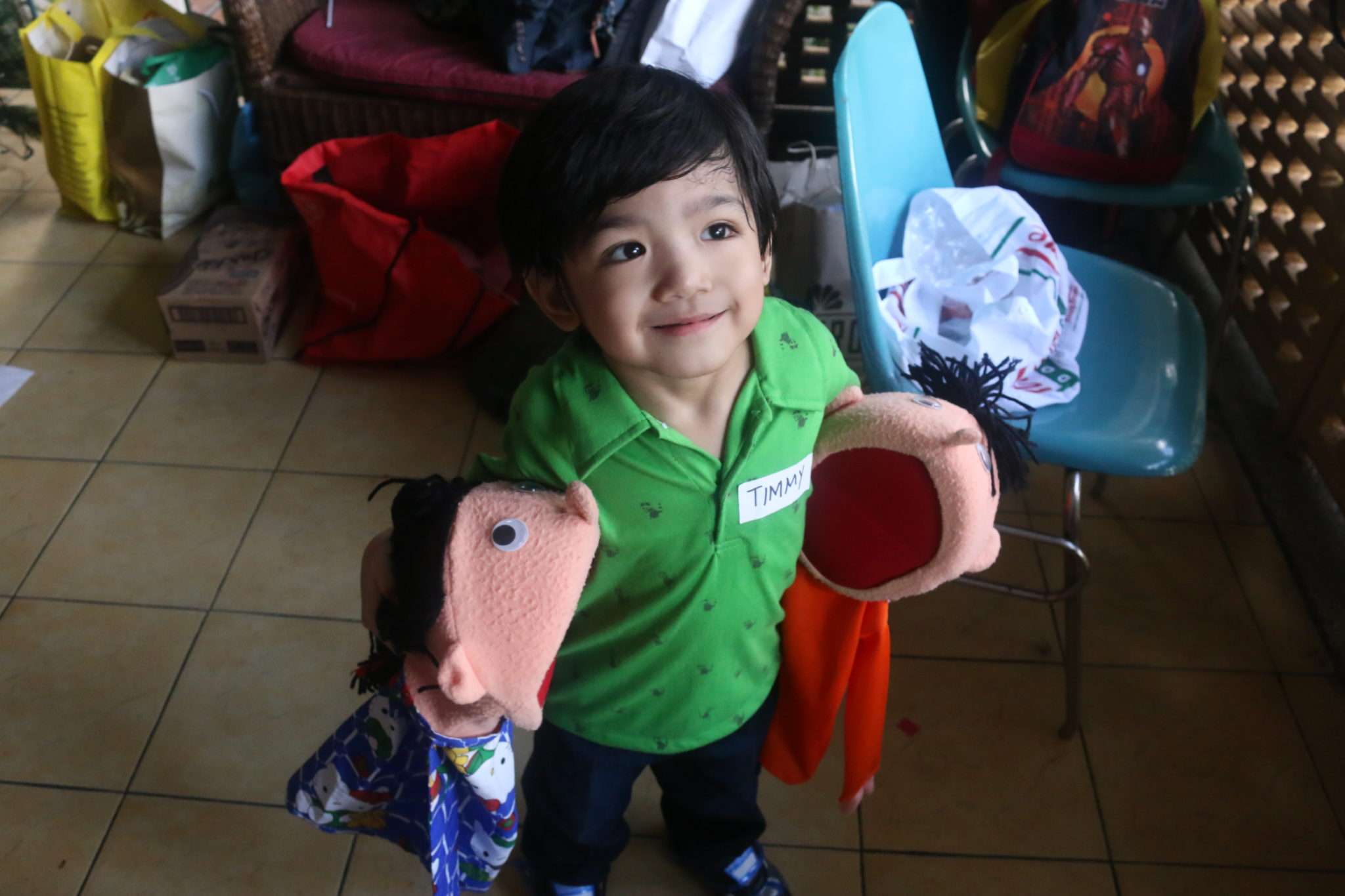 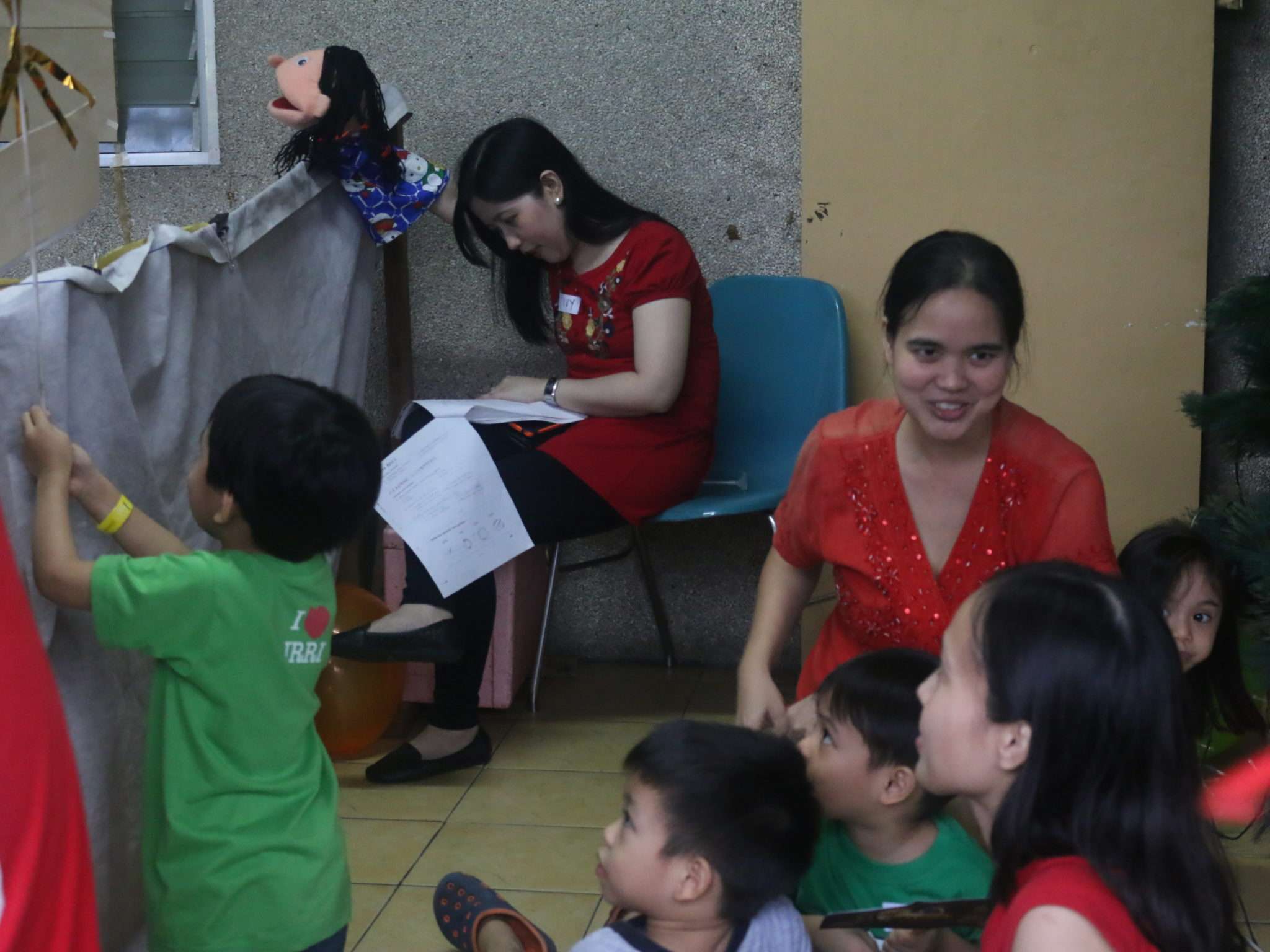 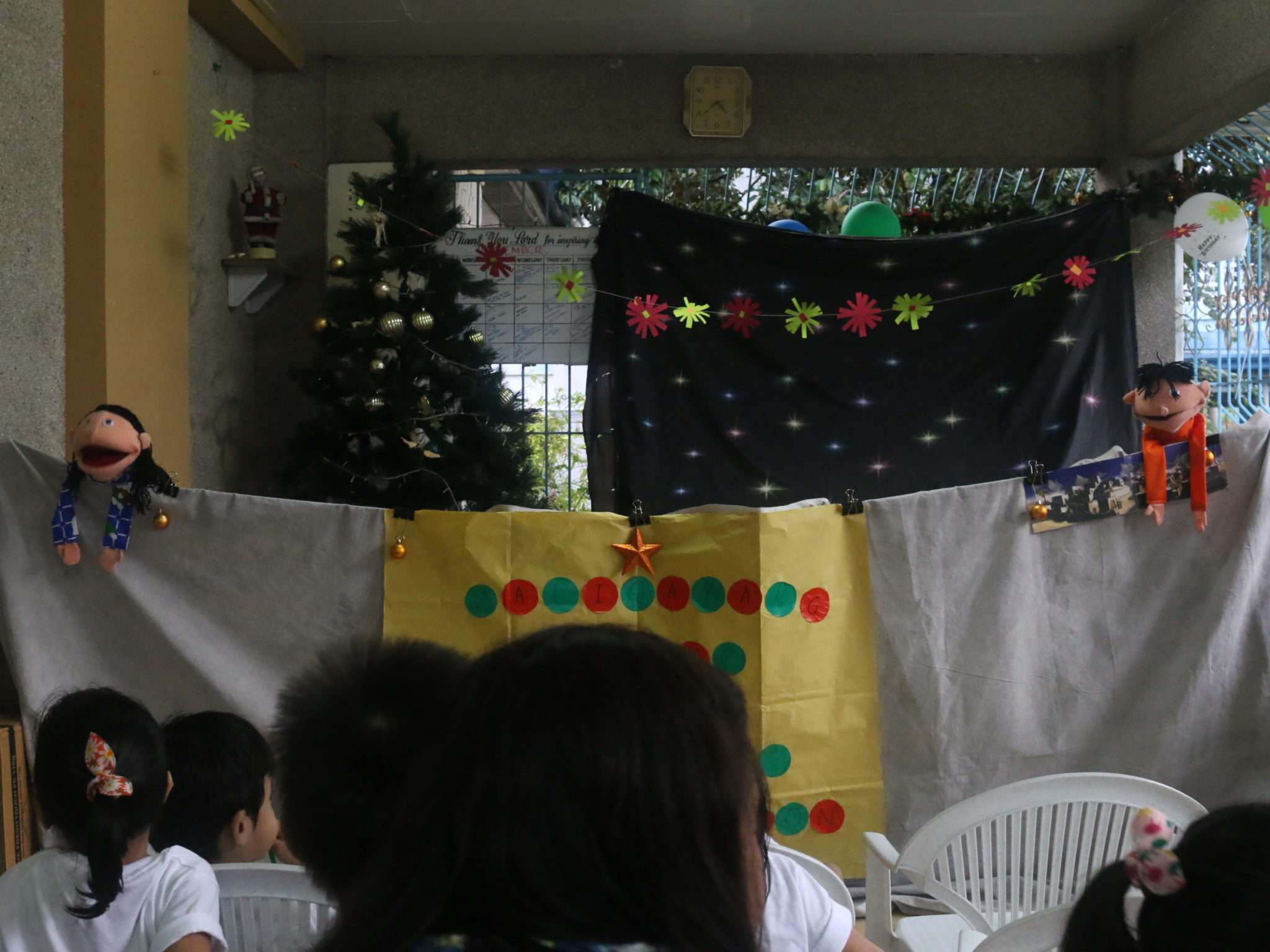 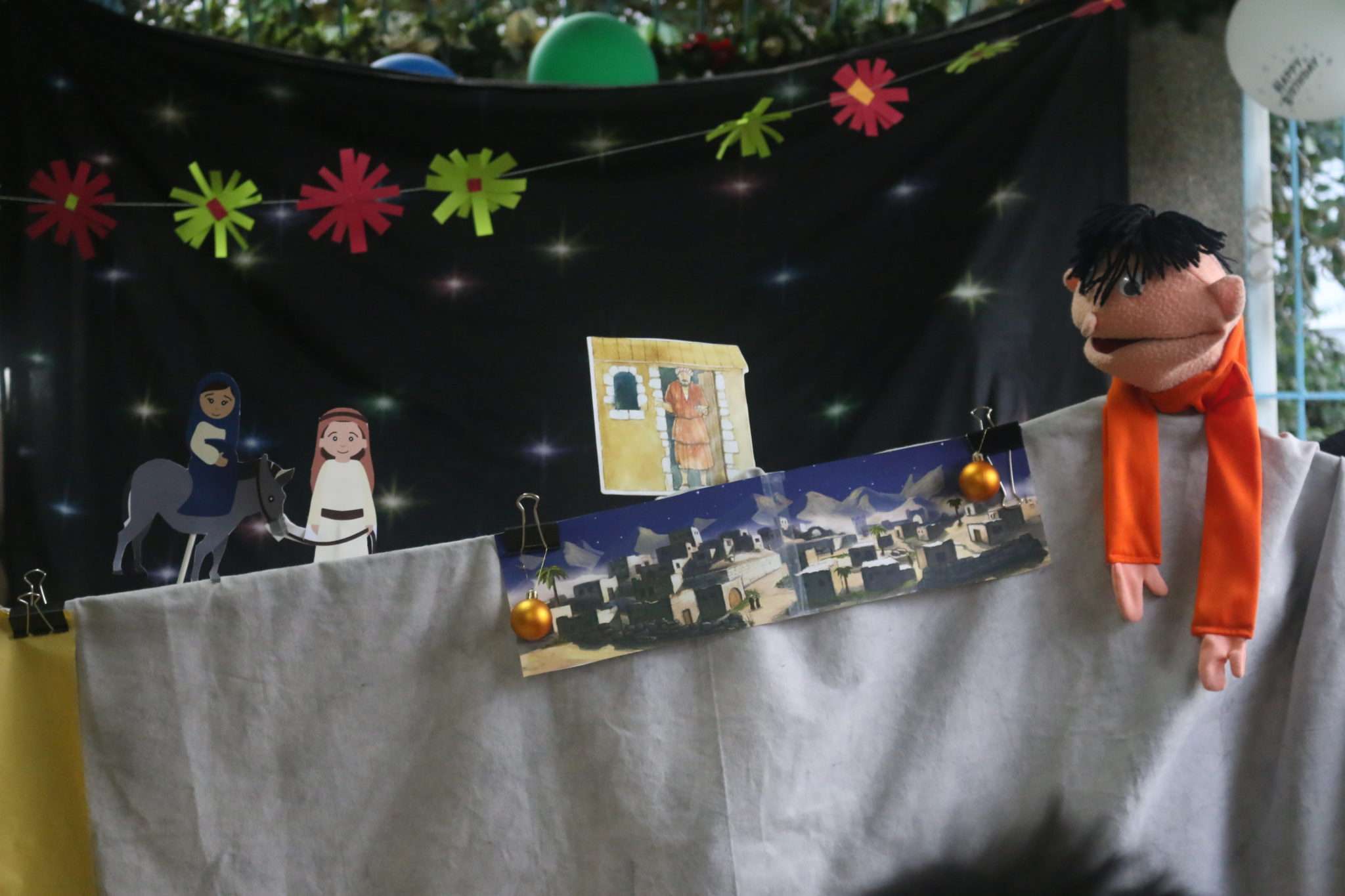 After the puppet show, our kids performed their song number and we sang with them, too! 🙂 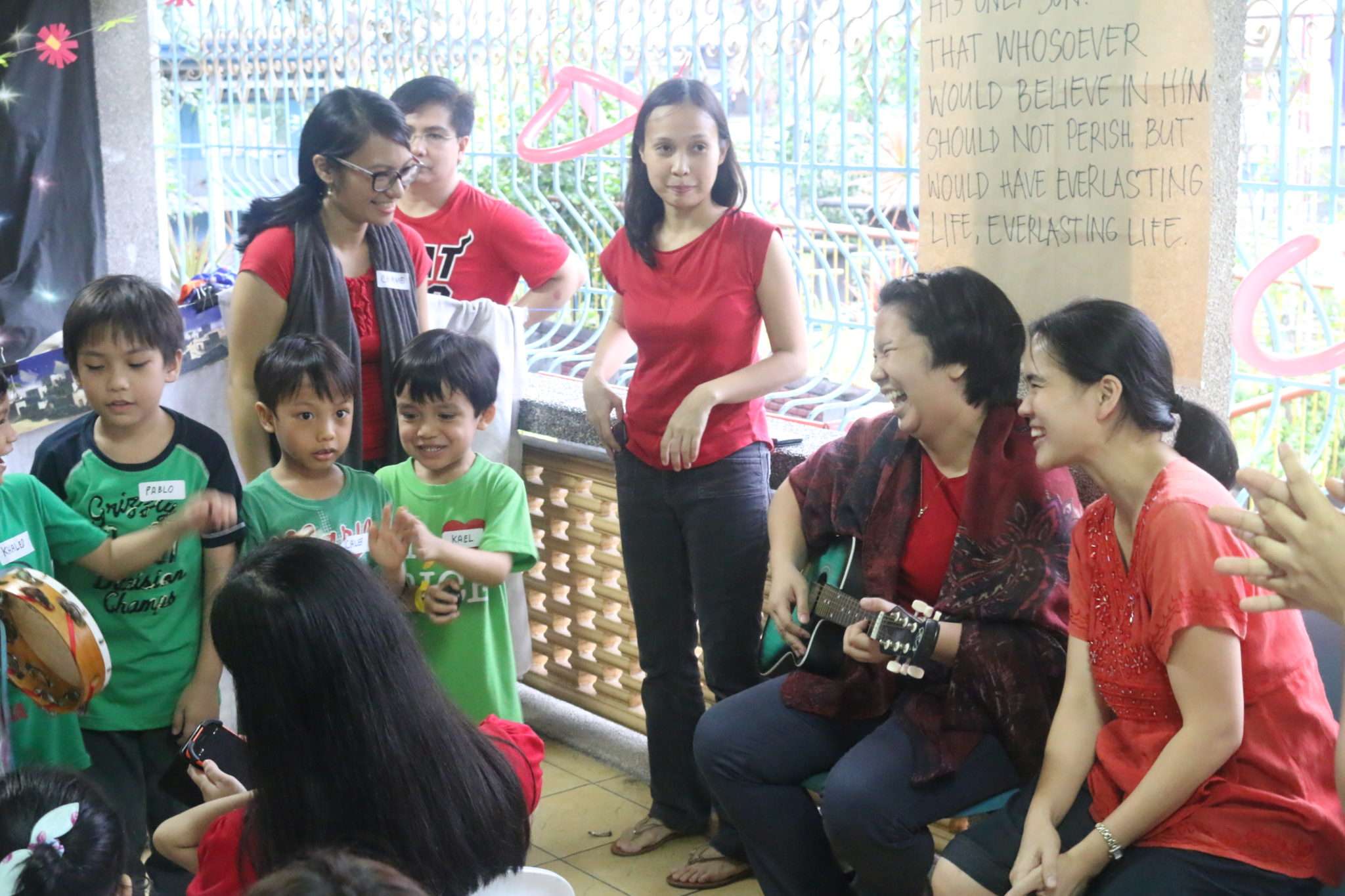 Joyfully singing for the orphans 🙂 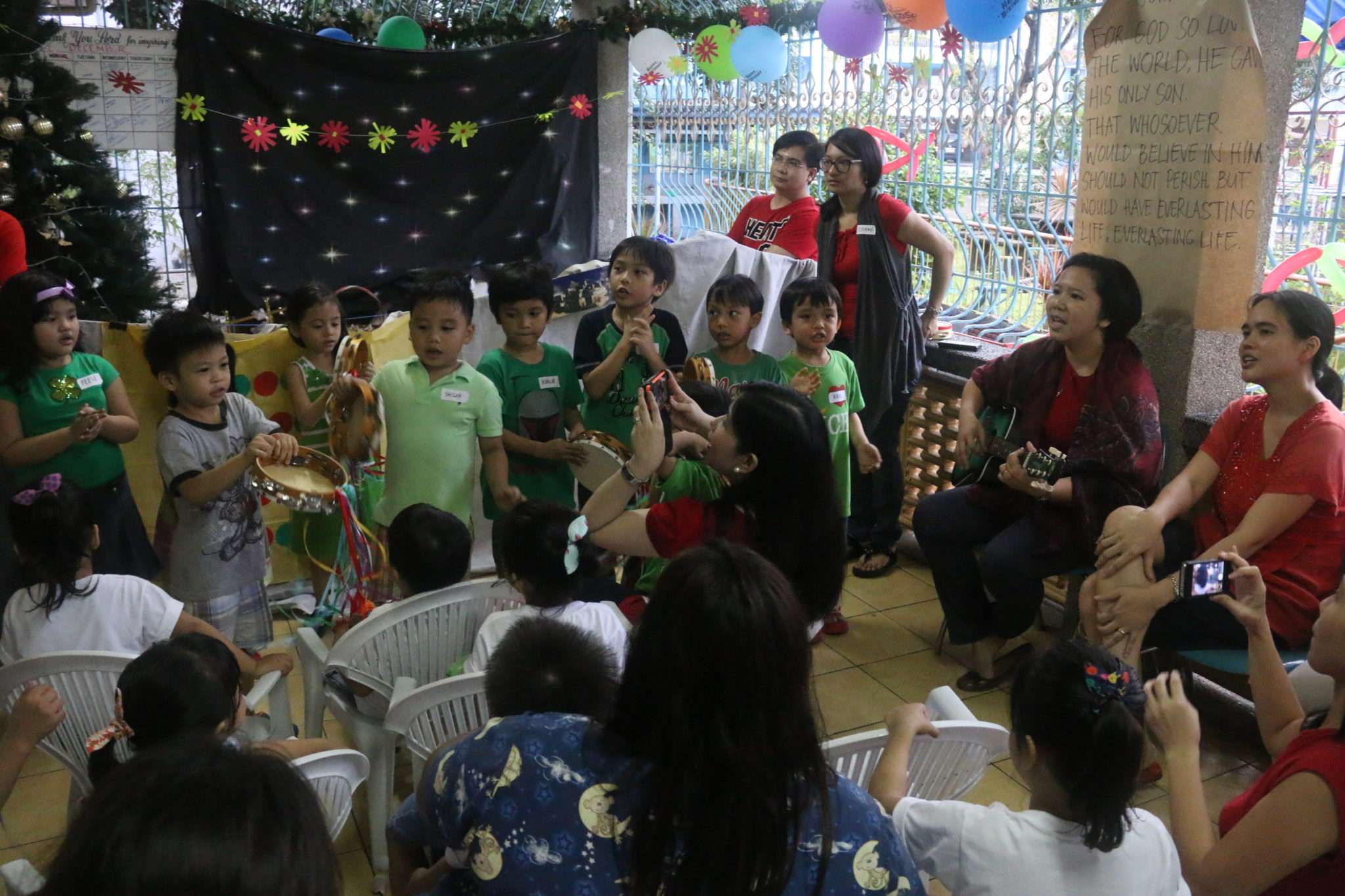 And then of course, it’s eating time! 🙂 Some of the kids from the orphanage needed to be spoon fed because they’re still too small to eat on their own. The youngest was 1 1/2 years old while the oldest was around 4. 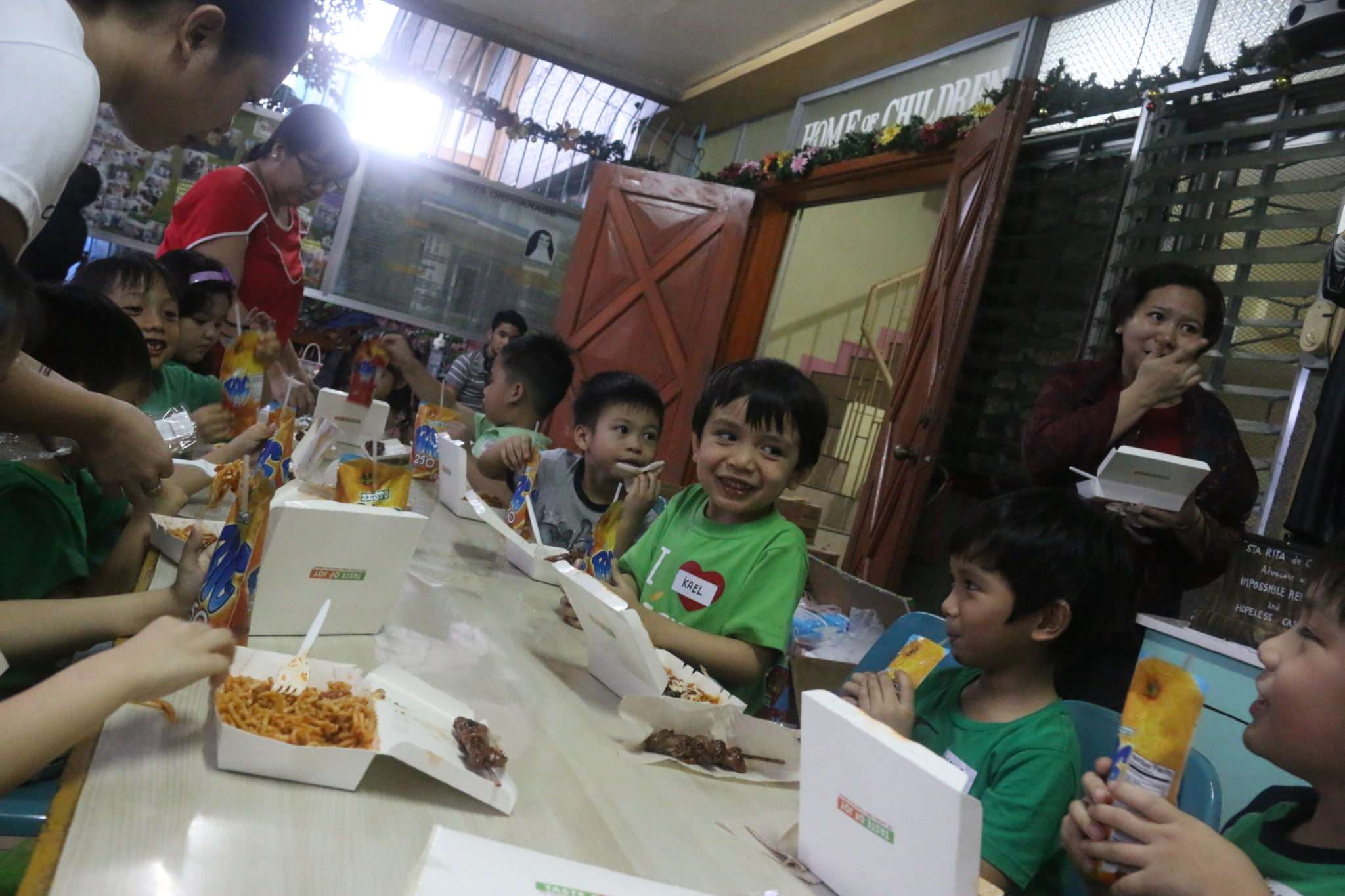 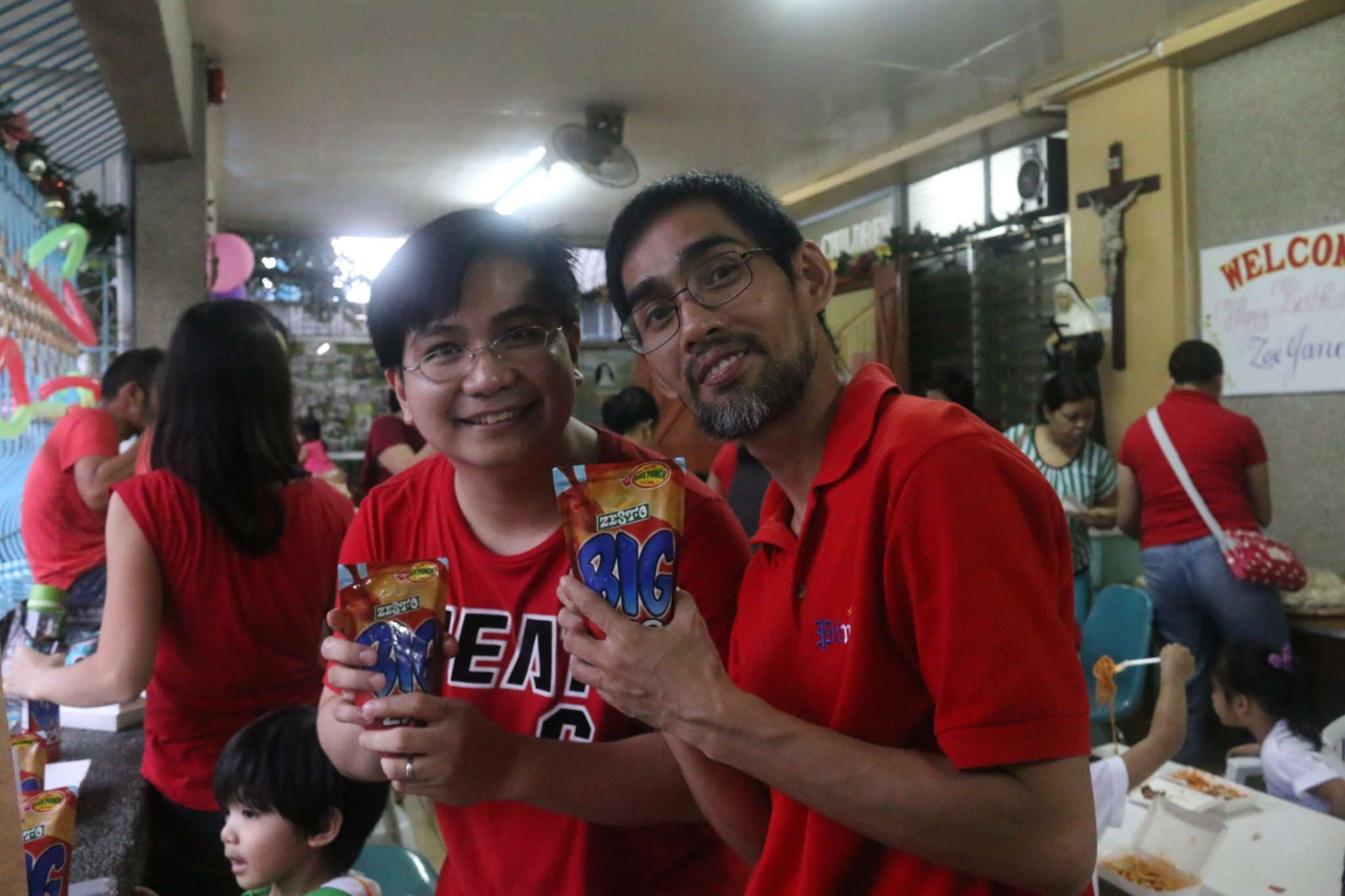 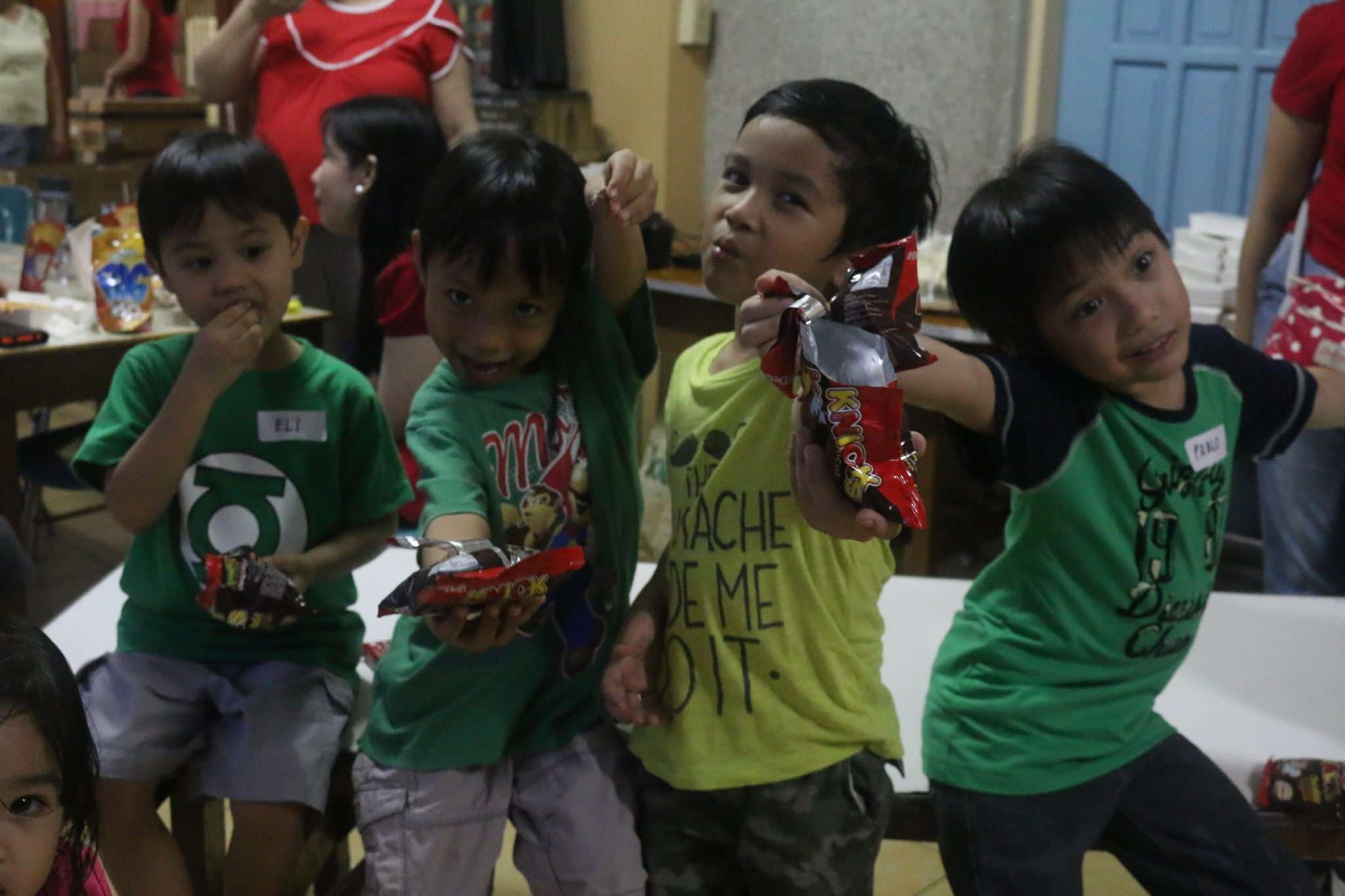 The boys going all goofy and having fun! 🙂

The children of St. Rita had to go back to their rooms by 5:00 pm. They are pretty rigid with their schedule, which is good because kids that young need routines. We weren’t able to formally say goodbye to them, though, because they were rushing to get ready for another Christmas party.

We turned over the gifts and donations to them and cleaned up our mess before leaving. 🙂 One of the dads closed us in prayer. His prayer was very moving and emotional as we prayed for these kids to have parents who will truly love them and care for them. 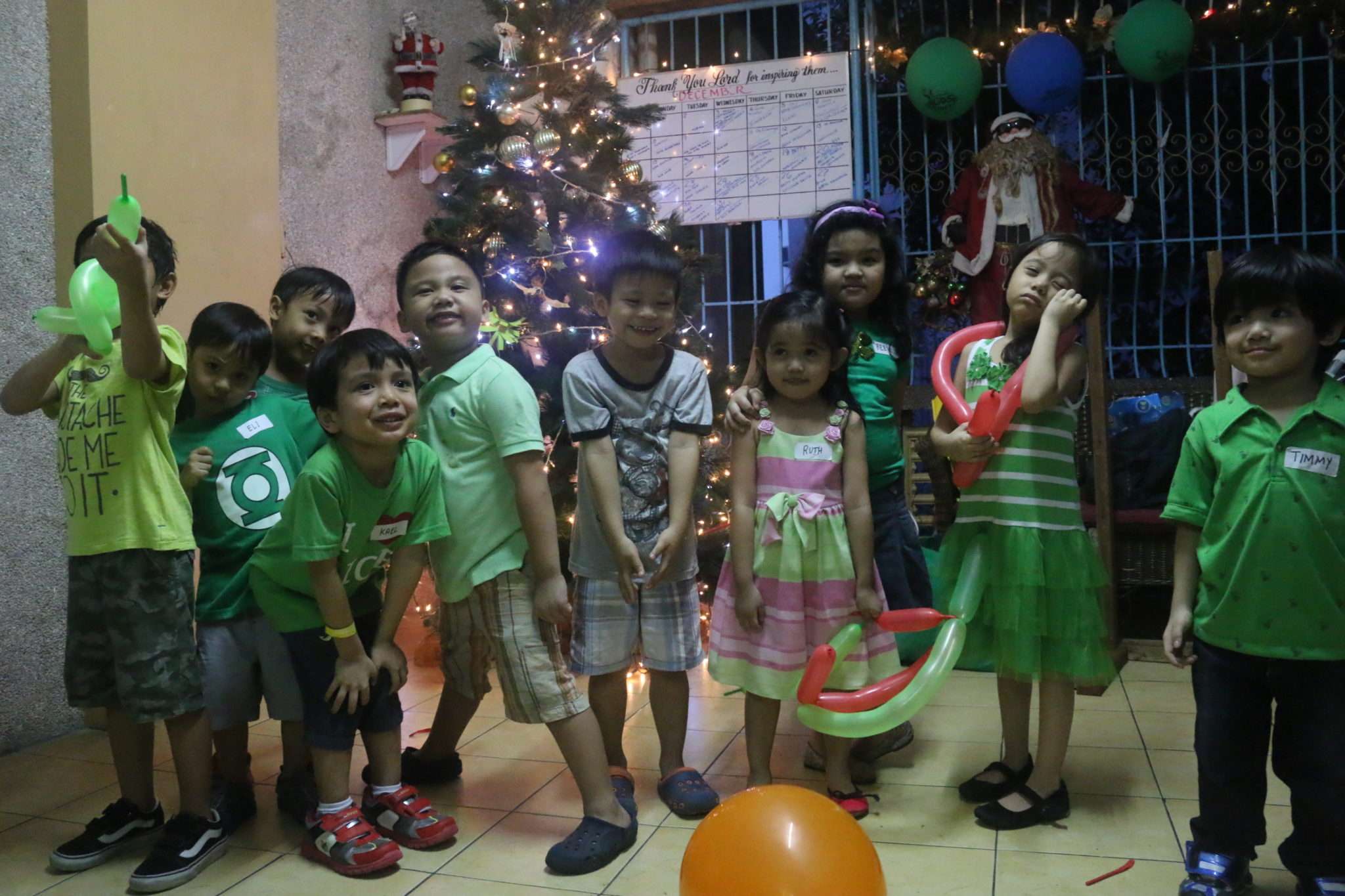 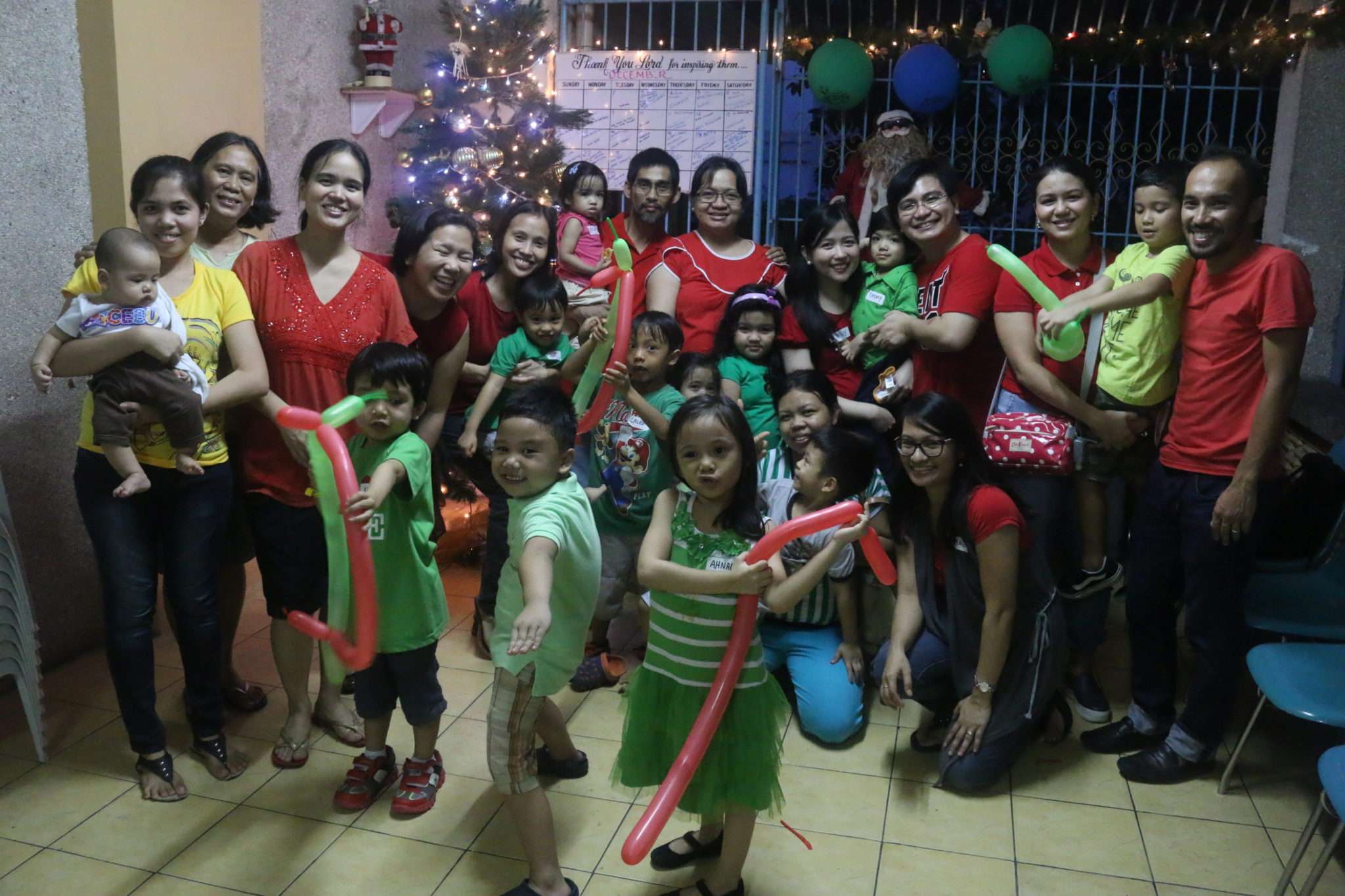 Personally, it was a great and humbling experience. It was a privilege to serve these kids who have never experienced how it is to be held and nurtured by their own mothers and fathers. I couldn’t help but imagine what it would be like to discover that your parents abandoned you. Every child in that orphanage will have a different journey. Some will have an easy time adjusting to their new families while others will take a while to fit in. Some may even try to learn who their real parents are just to come full circle and tie that loose end in their identity.

Seeing these children opened my eyes to the reality that the best thing a child could ever have is a parent’s intangible love. The kids in the orphanage receive gifts and donations regularly but that’s not what they yearn for the most. When that little girl hugged me, I was reminded that what kids need are affection and nurturing. My son will outgrow his toys, clothes, and other material things but the things that he won’t forget are the times we played together, spent quality time with each other, and all those moments when he felt loved, cared for, and appreciated.

One more for good measure! 🙂 And this time with the official photographer in the mix! 🙂

It’s my prayer that more than anything they will each discover about the love of our Heavenly Father. God’s love extends to everyone and reaches out to every individual. In Psalm 68:5, God is known as “Father to the fatherless.” It also says in Psalm 146: 9 that He “sustains the fatherless.” In Psalm 10:14 God is called the “helper of the fatherless.” He even commands us in James 1:27 to “look after orphans and widows in their distress” and in Exodus 22:22 God says “do not take advantage of a widow or an orphan.”

Our visit to the orphanage may just be for a few hours but it was an experience that we will all remember for the rest of our lives. I admit that orphans are not part of my usual prayer list but seeing them stirred something in me and prompted me to pray for them regularly. As we celebrate and commemorate the birth of Jesus this Christmas, I hope that we all take time to pray for orphans (and widows, too) that they may experience the love of Christ not only this holiday season but all throughout their lives. Their journey ahead will not be easy but with God’s love sustaining them through, they can overcome life’s hurdles. 🙂

Before I end this blog, I just want to send a special shoutout to Team L4 families (husbands, wives, and kids)! Thank you for your love and commitment to our homeschool group! 🙂

Have a blessed Christmas and wonderful New Year, everyone!!! 🙂