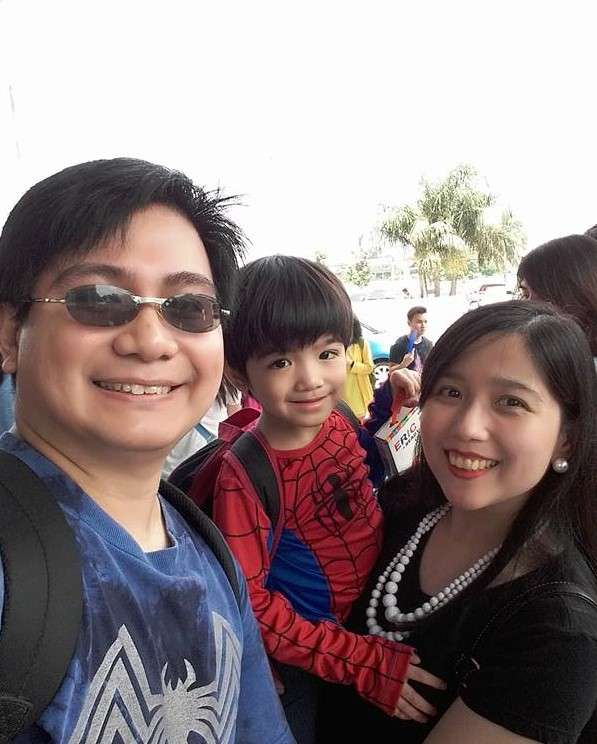 My husband is a comic book fanatic and I’ve been to a lot of comic book conventions because of him. It’s always a fun experience especially now that we can bring our little trooper along. 🙂 He started joining us last year when he was three years old.

But of course, it’s not always easy walking around and taking care of a toddler in big events like that. I’m always on high alert making sure that my son is always within my sight. Yesterday, we went to Asia Pop Con, the first international comic convention in the Philippines. It’s the biggest one we’ve been to so far! 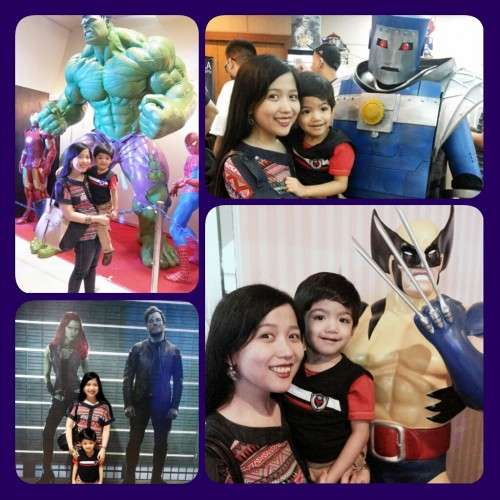 At first I wasn’t really sure if we should join but Omar had been so pumped up about this event months before the first PR was even announced. He has all this inside info about stuff related to comic books and super heroes because his job is to write them! This gives him first dibs on everything. Talk about dream job!

Anyway, I knew how important it was for us to share this moment with him. International artists and illustrators were flying in and it’s a once-in-a-lifetime event for hobbyists and collectors like him. However, I had my apprehensions. 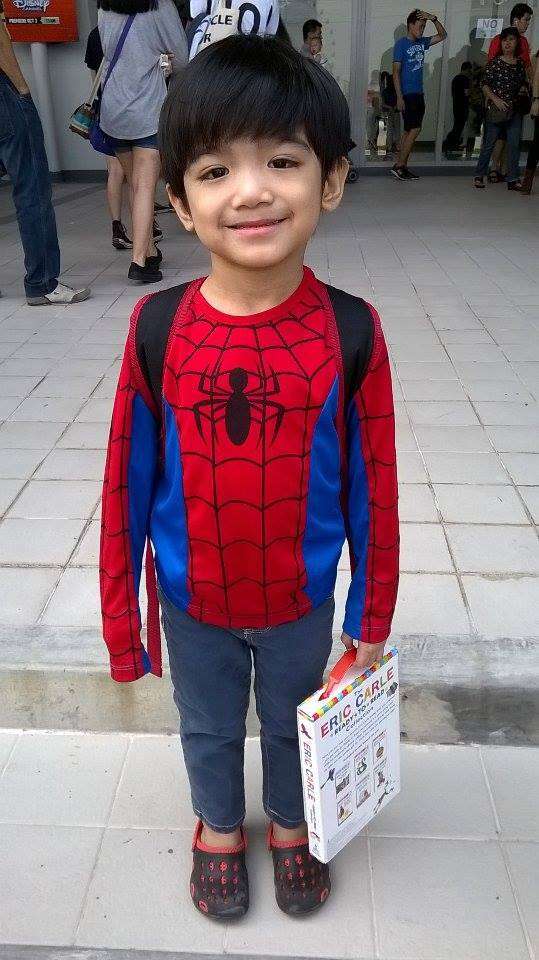 First, the entrance fee is P500.00 per head which is quite expensive compared to other comic cons we’ve been to. Good thing children below six years old are free. Second, it’s not in a mall where we can go out if Timmy and I get bored.

My husband told me the night before that it’s okay if we don’t join since we had a long day already. He just said that if I feel tired when I wake up then I don’t need to go with him. He asked me to pray about it, too. 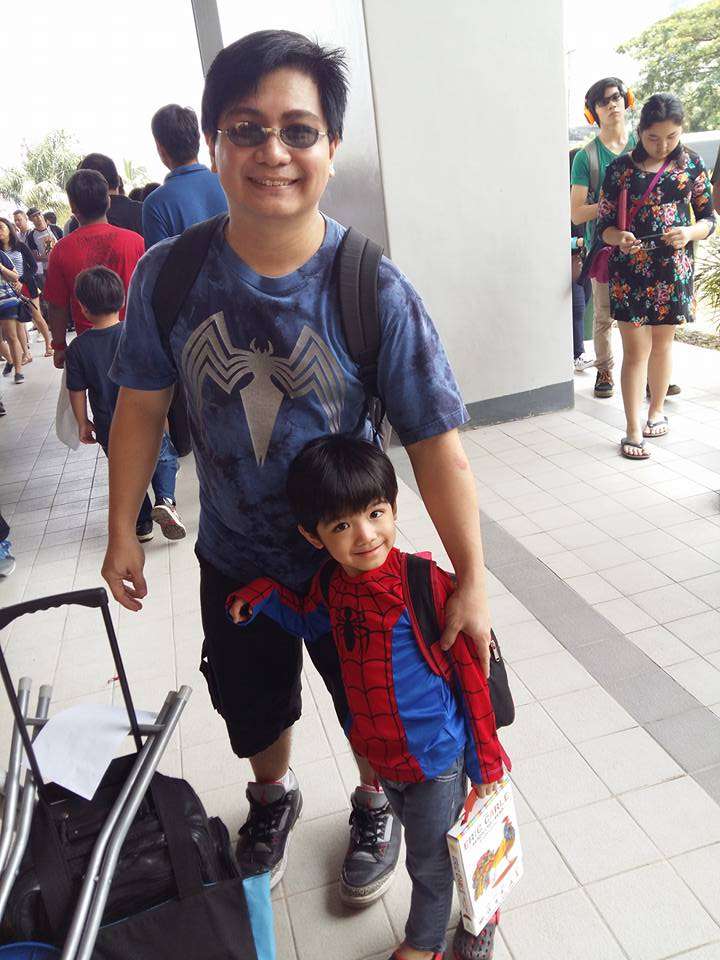 My big and little fanboys. 🙂

When I woke up the next morning I felt really refreshed. I had a good, deep, and uninterrupted sleep. So in terms of body check I was good to go. I prayed to God to speak to me during my Bible reading to help me decide. This was the verse in my devotions:

Do nothing from selfishness or empty conceit, but with humility of mind regard one another as more important than yourselves; do not merely look out for your own personal interests, but also for the interests of others. Have this attitude in yourselves which was also in Christ Jesus.

Well, nothing could get any clearer than that! Haha! 🙂 By then my body and mind are all set to go. But I still felt like we need to prepare more. I searched online for reviews about the event. Praise God I found a blogger that gave tips on what to bring to the Asia Pop Con.

I also scouted for event pictures and saw that the hall was huge which was a big plus if in case we’ll be using the stroller for Timmy’s nap or when he gets tired from walking and running around. Then I saw that there was a guest lounge! I thought it was for attendees who need to rest and relax.

When we got there it turned out that it was for cosplayers, celebrities, and other “guests.” I thought it was like a paid lounge or something. Haha! Anyway, before I even knew that I was all set to join my hubby. 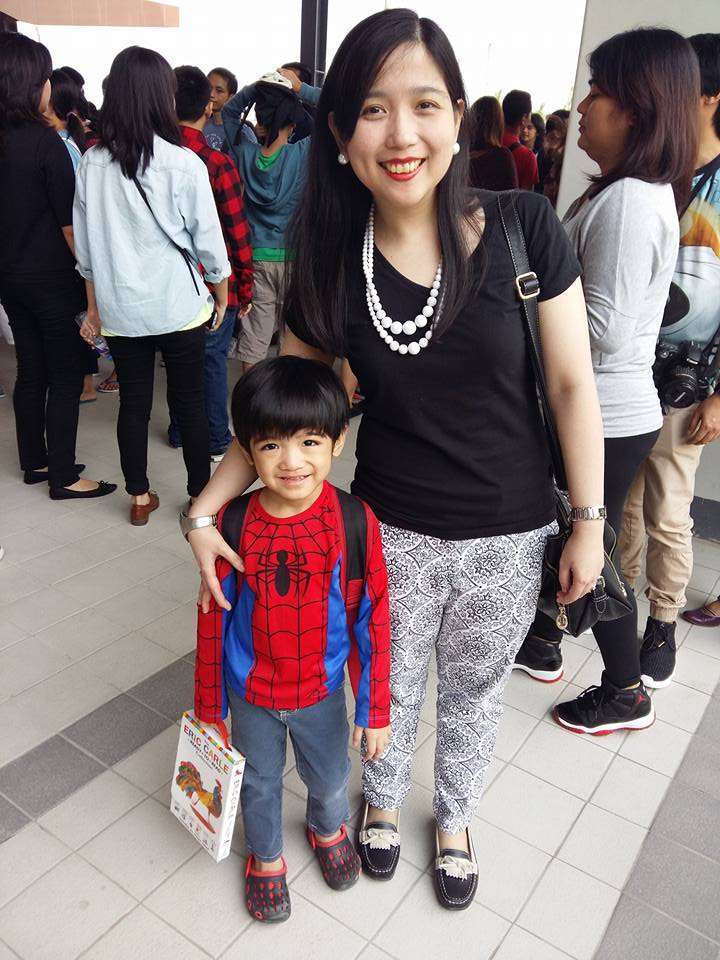 So if you’re a mom like me attending a big event with husband and kids, here are some tips: 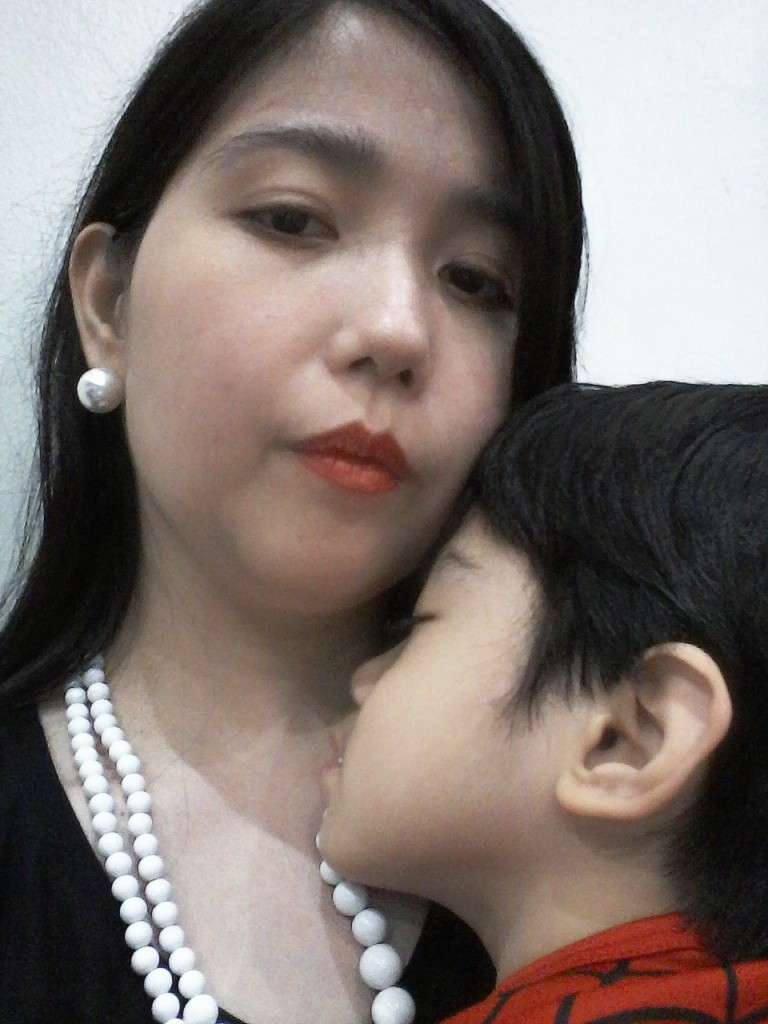 Basically what we did was roam around, take pictures with action figures, and play! I even had a Hollywood celebrity sighting. Heehee! Omar was in geek heaven and had all his comic books and graphic novels signed. 🙂 It was great to see him meet the artists he admires and that he had the chance to talk to them! Geek is the new cool, by the way. 🙂

Here are some of the highlights from my Asia Pop Con date with my boys: 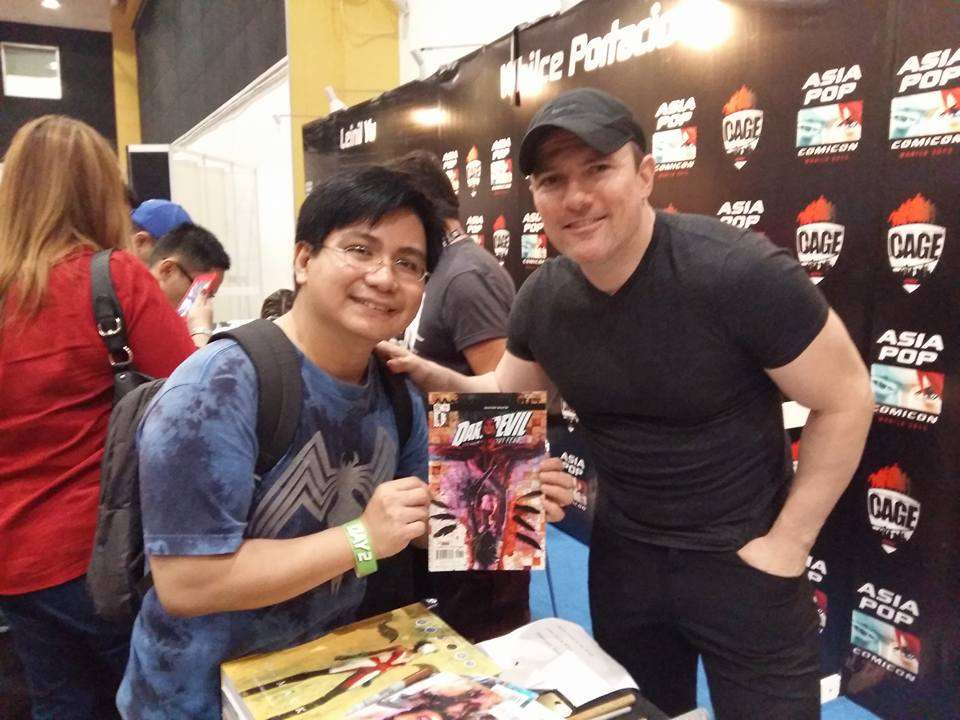 Omar with David Mack, creator and artist of “Daredevil.” 🙂 He also created the art and concept in “Captain America: Winter Soldier.” 🙂 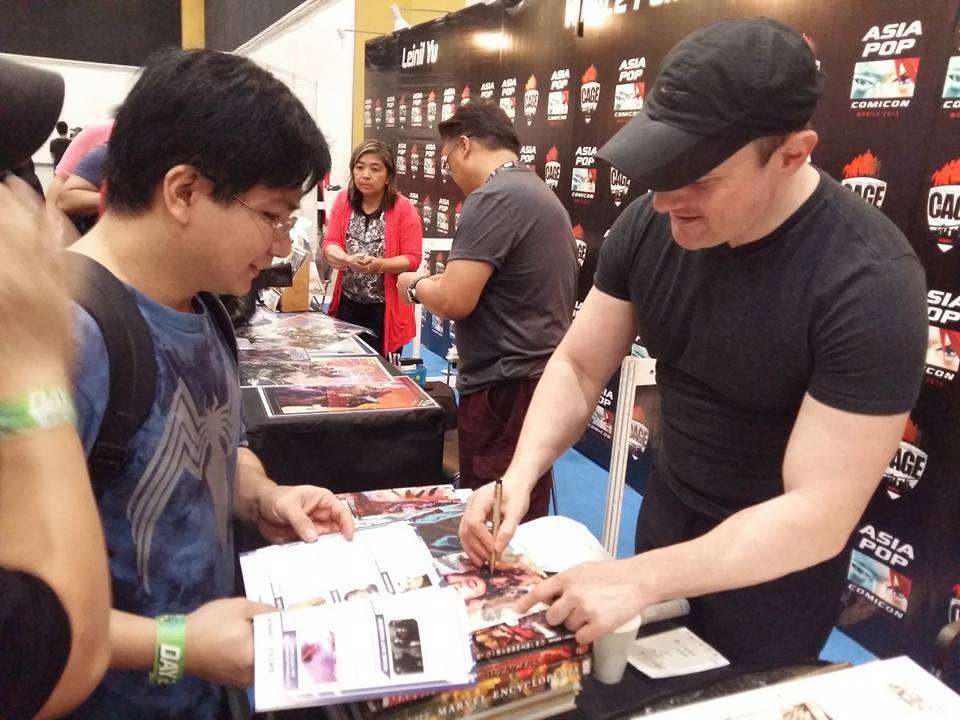 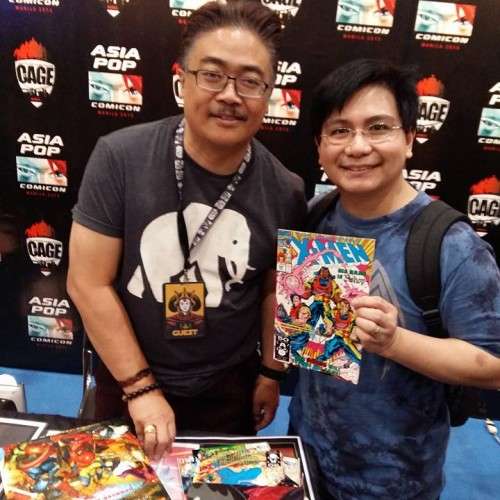 Hubby with the great Whilce Portacio, Marvel artist for “Uncanny X-Men” and “X-Factor.” He also created the character of Bishop! 🙂 And yes, he’s a Filipino! 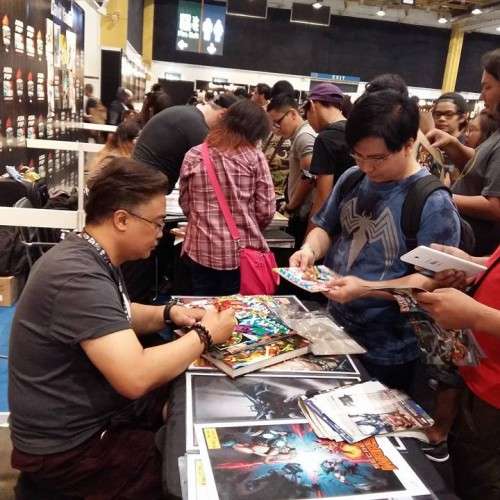 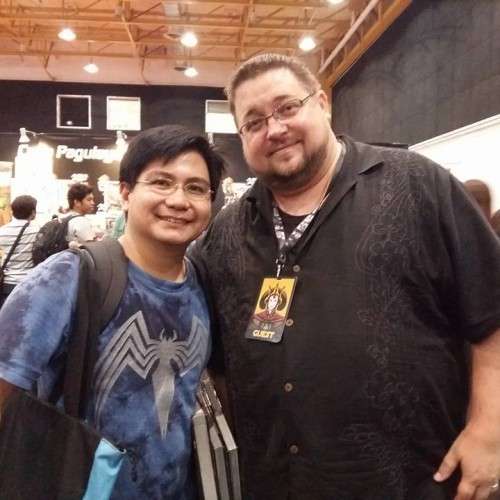 Omar with CB Cebulski, Marvel Vice President for International Development and Brand Management. He’s also a Marvel writer and editor. He scouts artists around the globe! 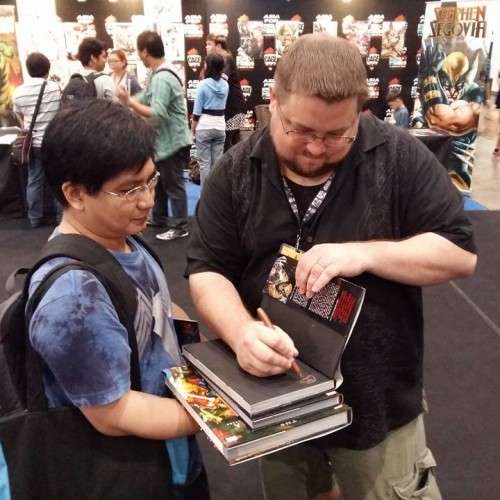 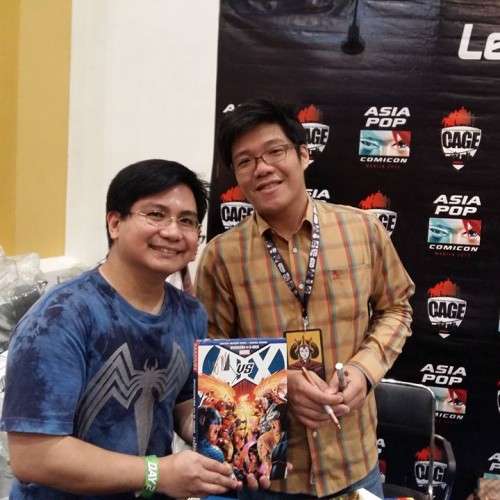 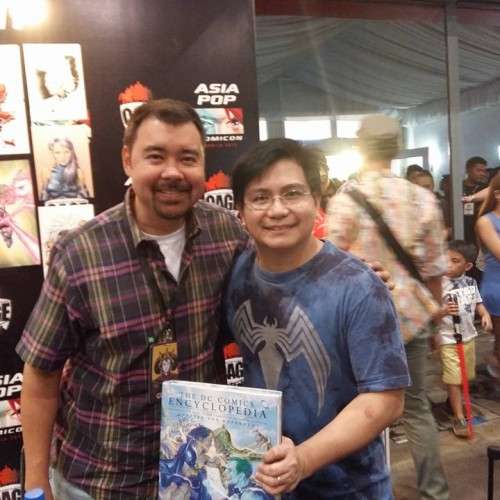 Omar with Hank Kanalz, DC’s Senior Vice President of Editorial Strategy and Administration. He is also a comic book writer. 🙂 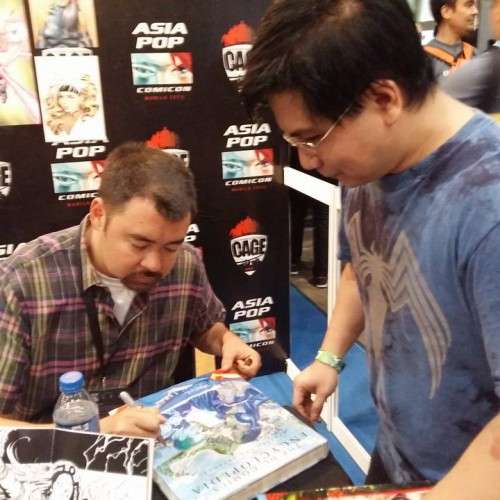 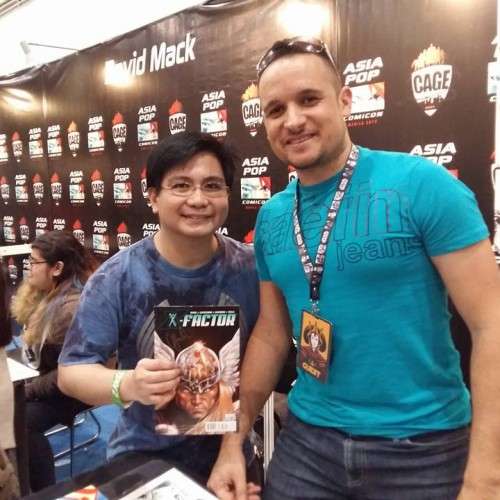 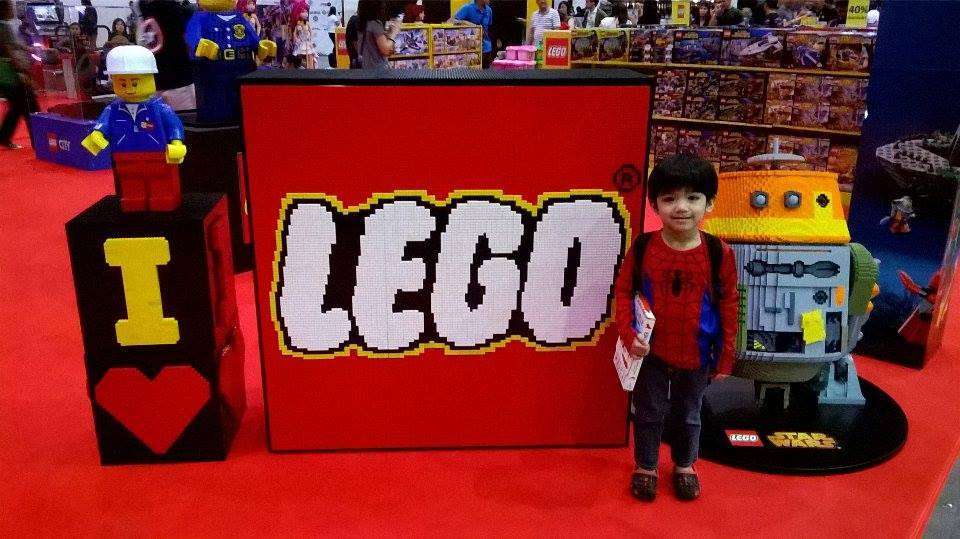 Something for the kids! 🙂 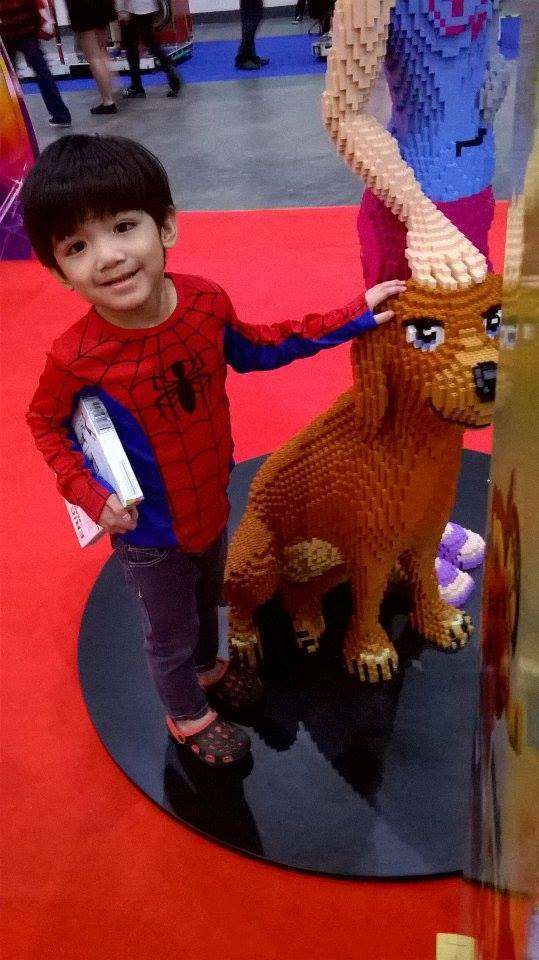 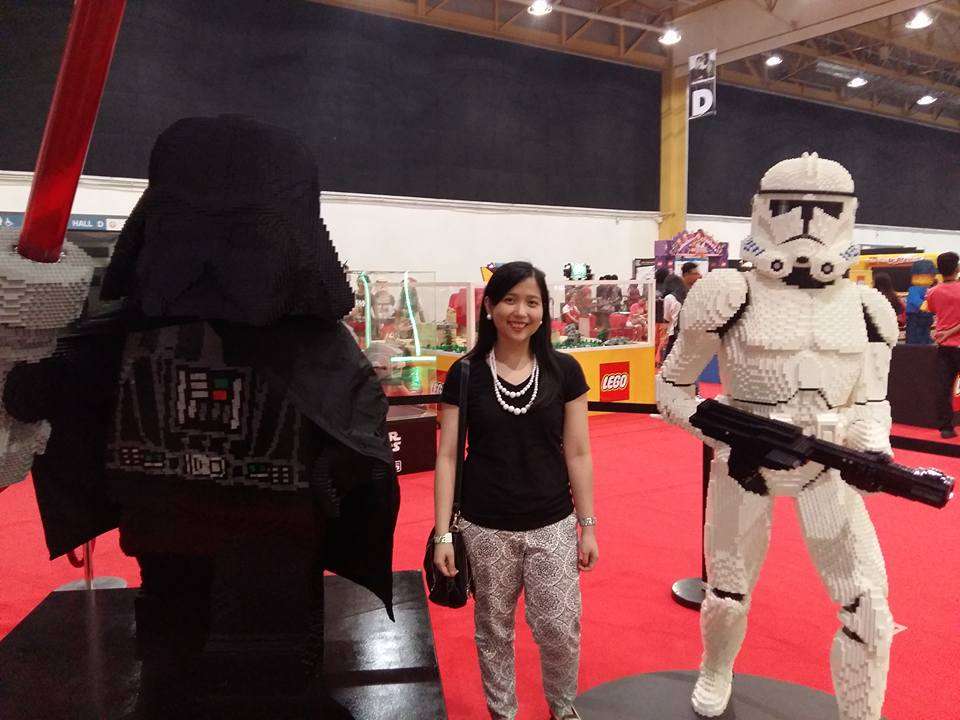 Just wanted a picture with them because we’re matchy-matchy. Haha! 🙂 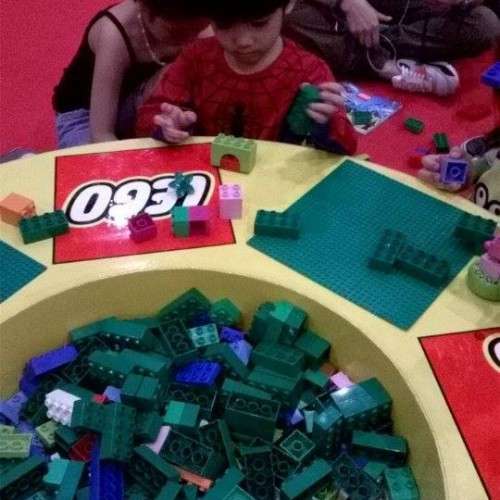 A Lego a day, keeps the boredom away! 🙂 Haha! 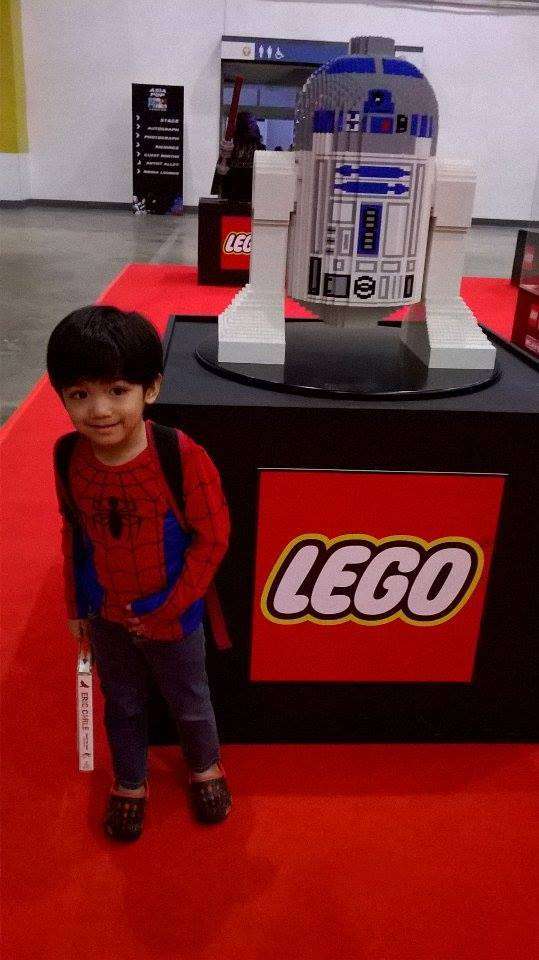 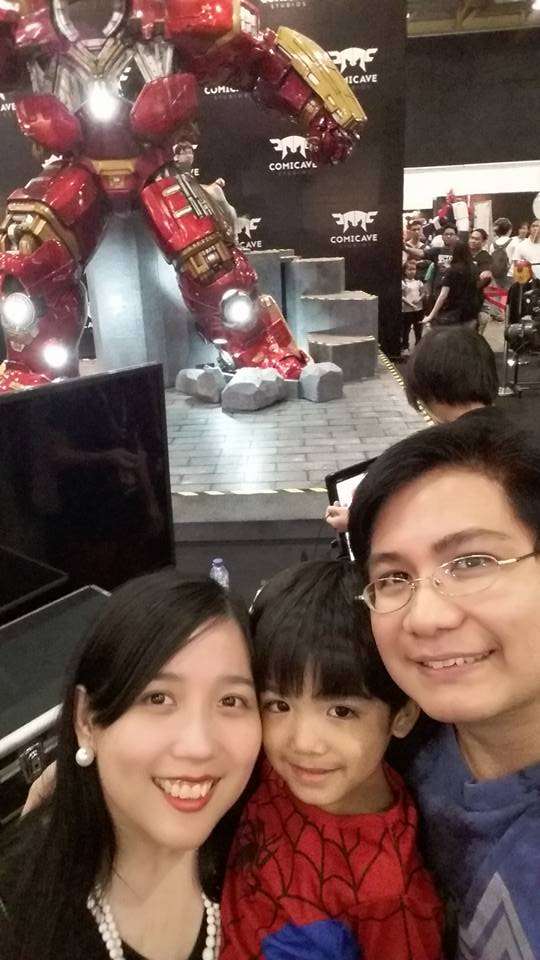 It’s the Hulkbuster! You can actually have your pic taken inside but the lines were too long. So we just took a picture outside of it. 🙂 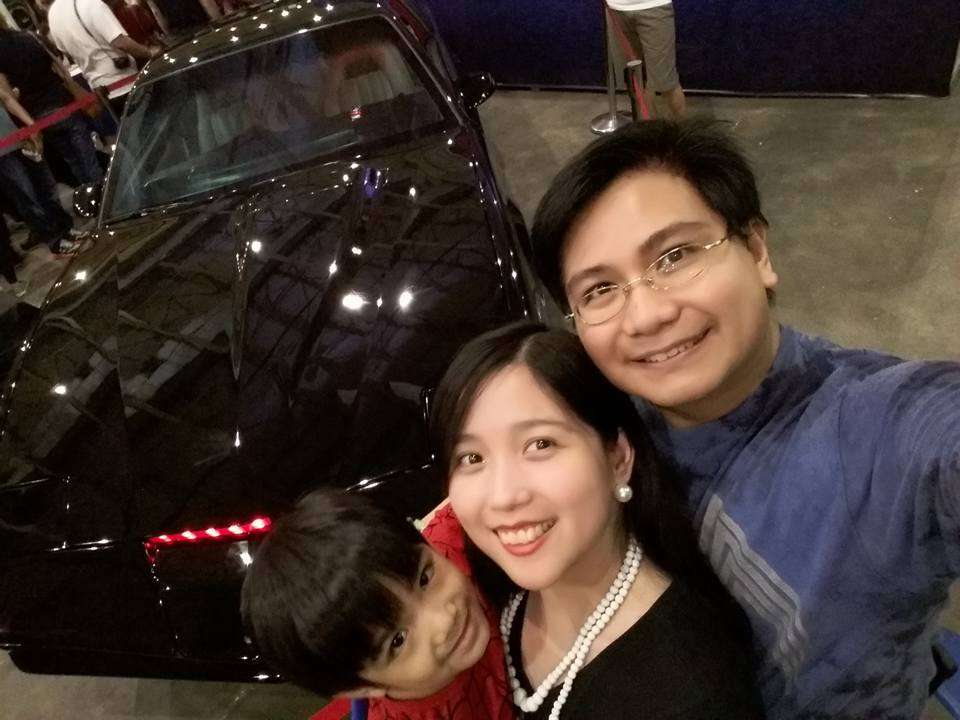 That, my friends, is the famous Knight Rider car, Kitt. 🙂 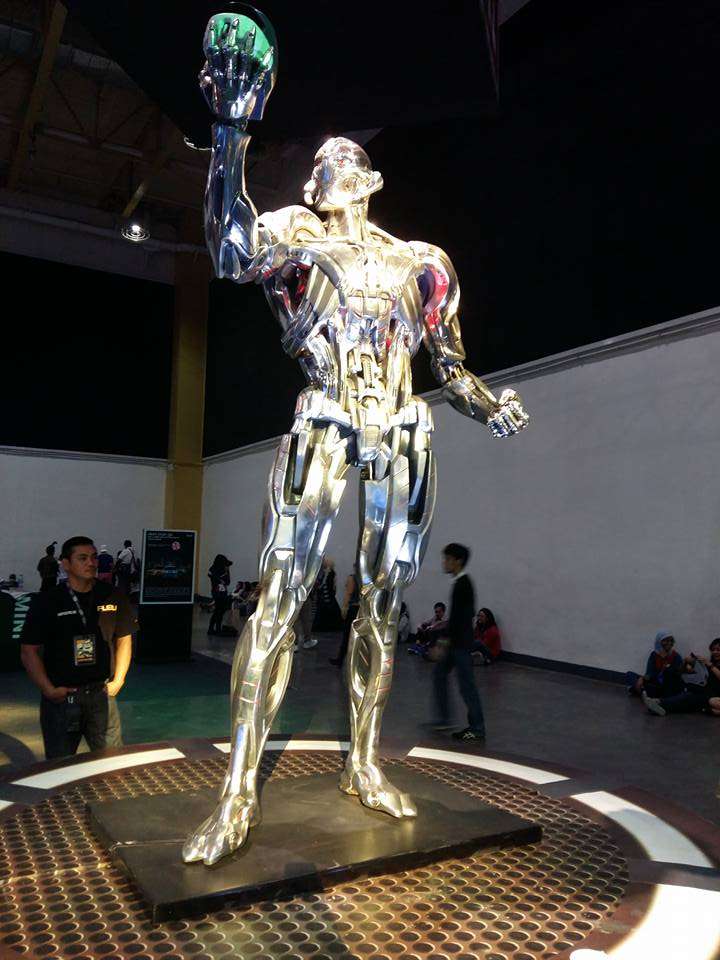 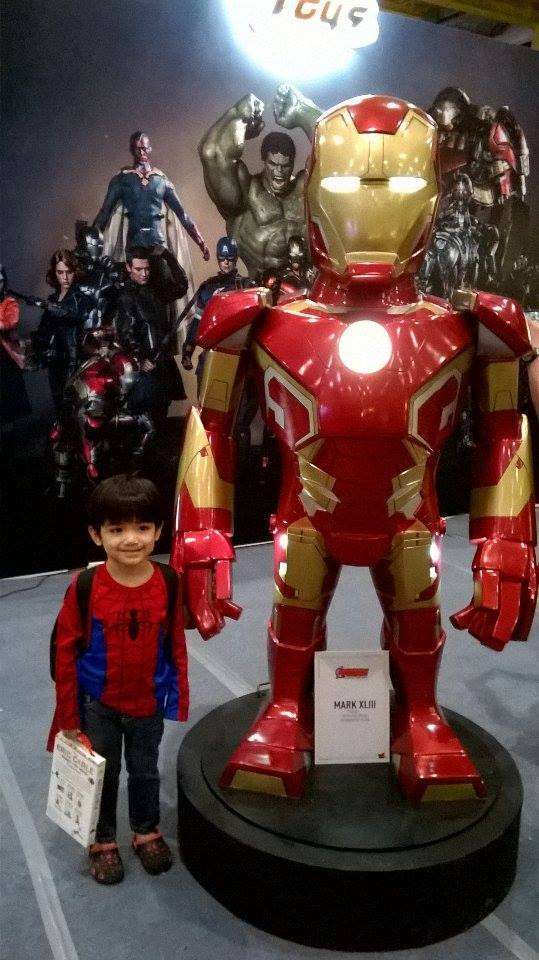 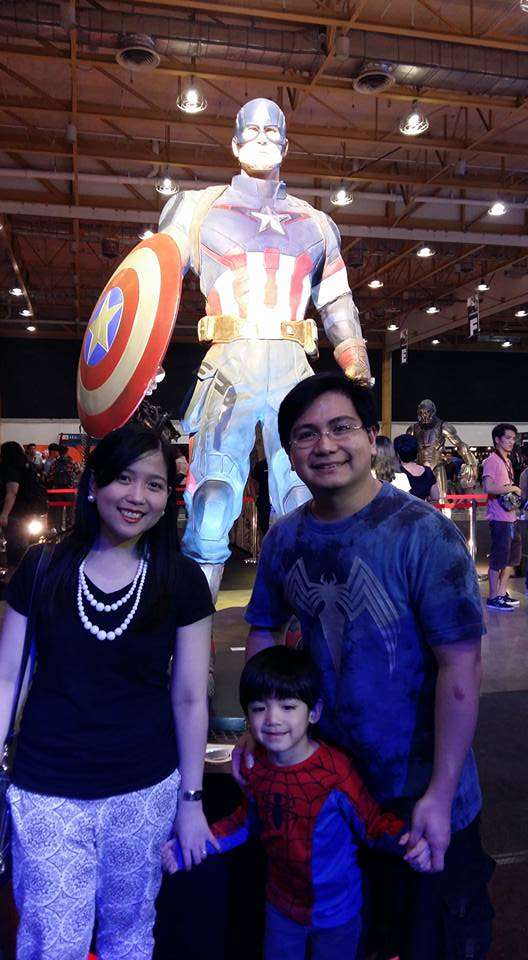 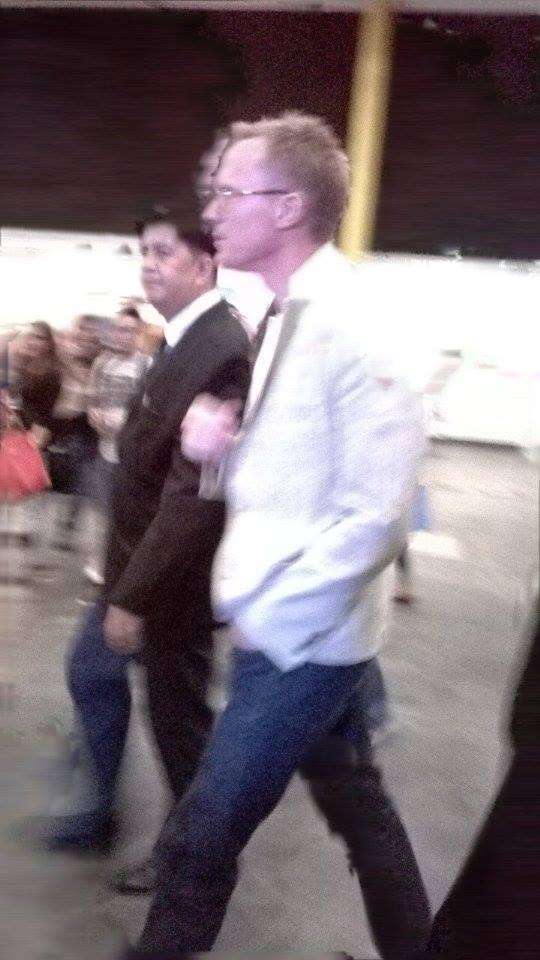 I spotted Paul Bettany, too! He passed right in front of me! He played the role of Vision in “Avengers: Age of Ultron.” 🙂 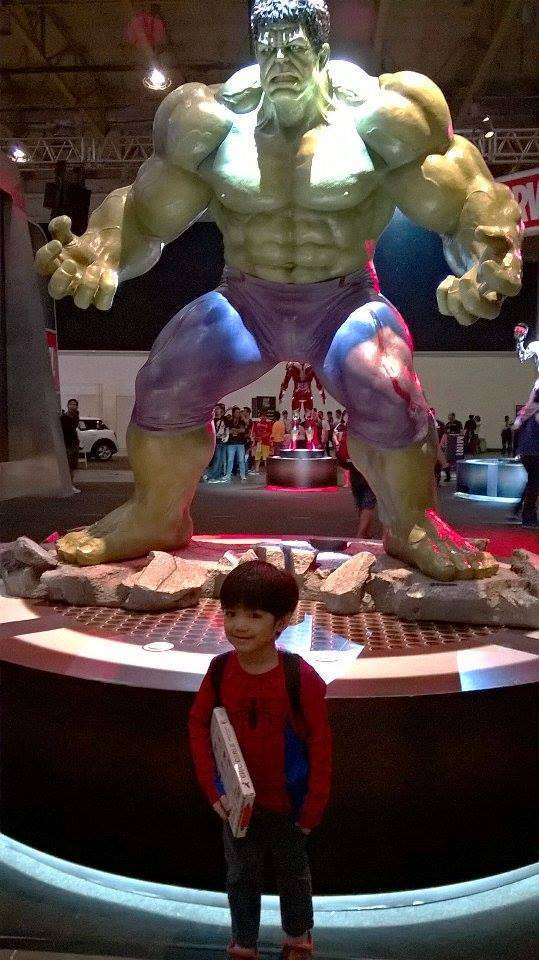 Spidey and the Hulk. 🙂 Talk about life-size!

I was really glad that Timmy and I joined. 🙂 We had a busy work week (thankfully we work from home) so going out was a stress reliever for all of us. 🙂 Next year, if in case they will hold another international comic con here in the Philippines, we already have a plan.

Hubby has it all figured out what we need to do in 2016 like lining up early, devoting a day for signing with just the two of us, a day to attend the panels and screenings (this time with Timmy), and more. Talk about early planning! Haha!

Seeing my boys (especially the older one…Haha!) have a blast filled my love tank. 🙂 I think that’s the best part of the event for me. 🙂 I know it’s cheesy but I guess it’s just a mommy thing. 🙂

So whether it’s attending comic con, a basketball game, hitting the gym or other interests that your hubby asks you to be part of, try your best to be there. 🙂 Make the most out of it, have your own game plan, and most of all, create memories!

Now, to find a big event for ME where my boys can tag along. 🙂