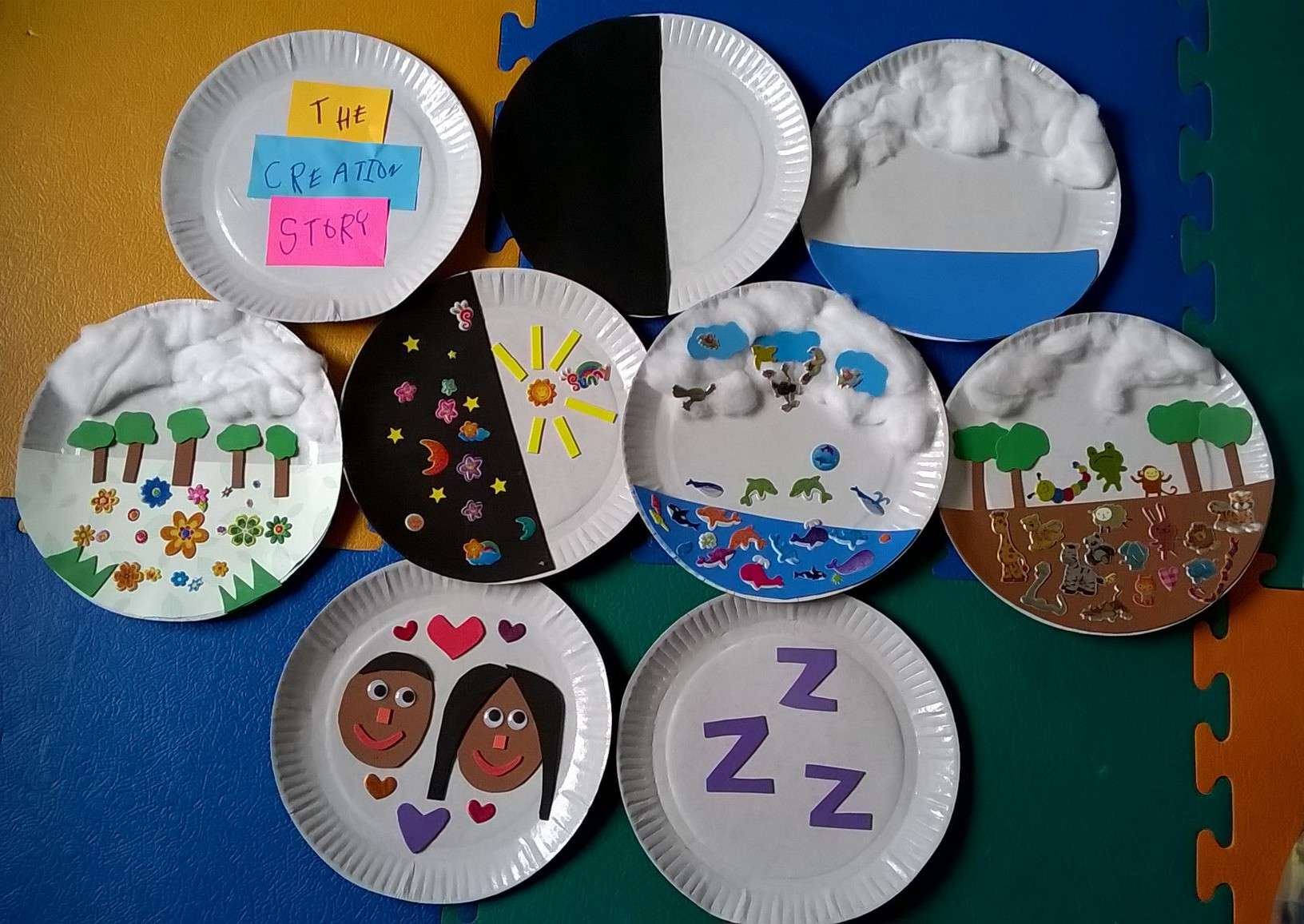 C is for Creation

When we did our C week, we mainly focused on the Creation Story (more on that in the Art section). I also figured it was also a good time to trying rowing our first “Five in a Row” book “The Carrot Seed” but I will blog separately about our FIAR weeks. In the meantime, here’s how our C week went. 🙂

We read the following books below. Timmy loves “Cookies” by Keith Baker. If you haven’t tried Mr. and Mrs. Green books, I encourage you to try it! “Corduroy” is another favorite. When we bought it early this year, Timmy read it daily for I don’t know how long. Then as always, the novelty wore out and he shifted to another book of the week (or month). 🙂 So when we revisited this last July (Yup, just when I thought I was finally making progress I’m back to my blogging backlog.), he remembered his obsession for this book! Haha! The same goes for his “Chicka Chicka Boom Boom.” It was really more of novelty reading week for us. 🙂

Timmy obviously has lots of books and I think I should come up with a plan on how to reread his old ones instead of just focusing on the new ones which come almost every week. Haha! Our letter of the week activity helps but I think we ought to do something more systematic. 🙂 If you have suggestions, let me know! 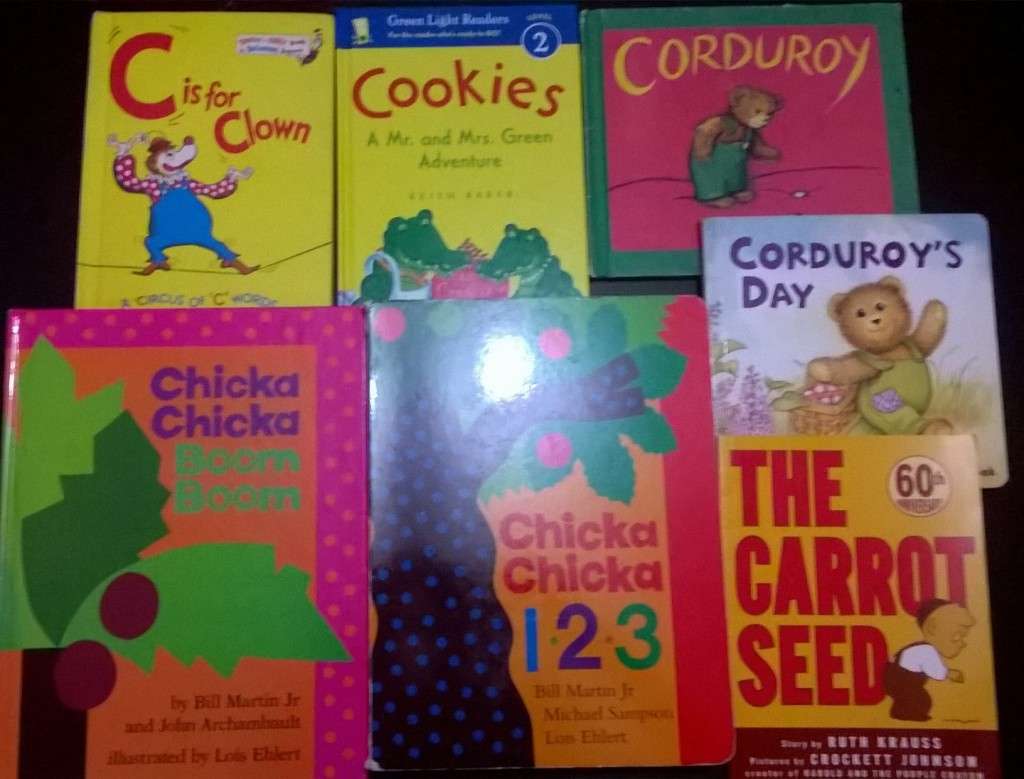 For our writing activity, we played Catchphrase! Haha! I wrote clues about words that start with C and asked Timmy to write the answers. 🙂 We also did our usual C writing activity of completing the words that begin with our letter of the week. 🙂 We did that at Starbucks while waiting for our drinks. I make sure I always have colored papers and pens in my bag so that when boredom strikes Timmy can doodle or I can give him an activity that he likes to do! 🙂 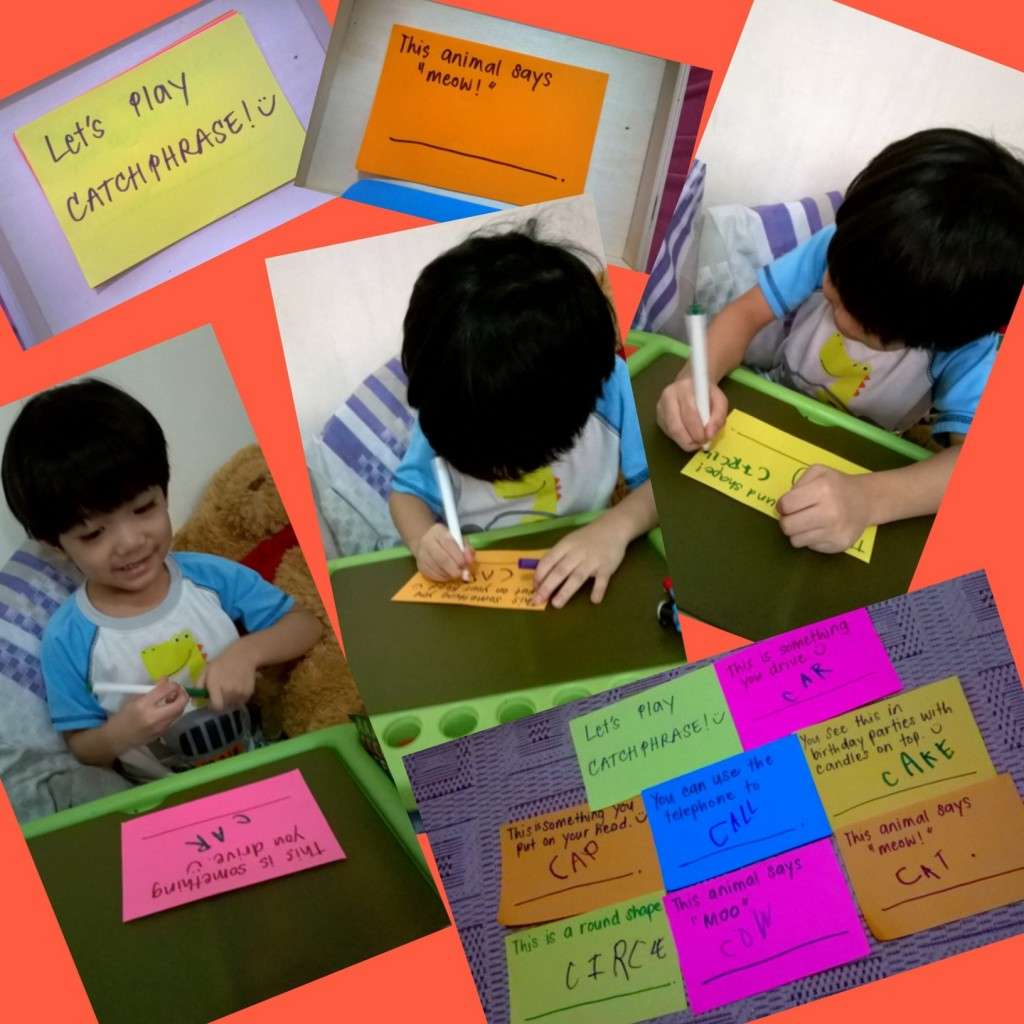 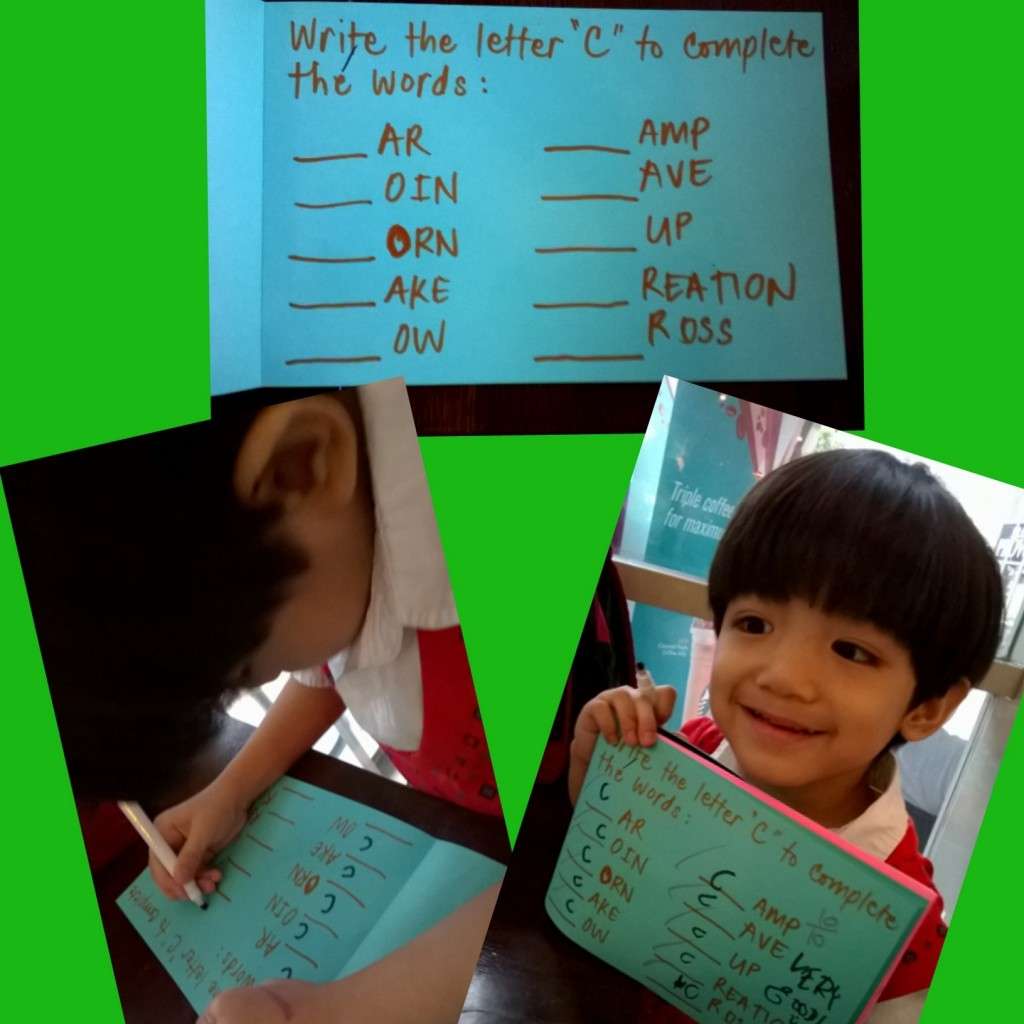 For math, I came up with something random (again while waiting at Starbucks). Haha! It’s a simple counting and matching game. We did other math activities that are not really C-themed like number copywork, skip counting, and more! Hmmm…come to think of it, those begin with C, too! 🙂 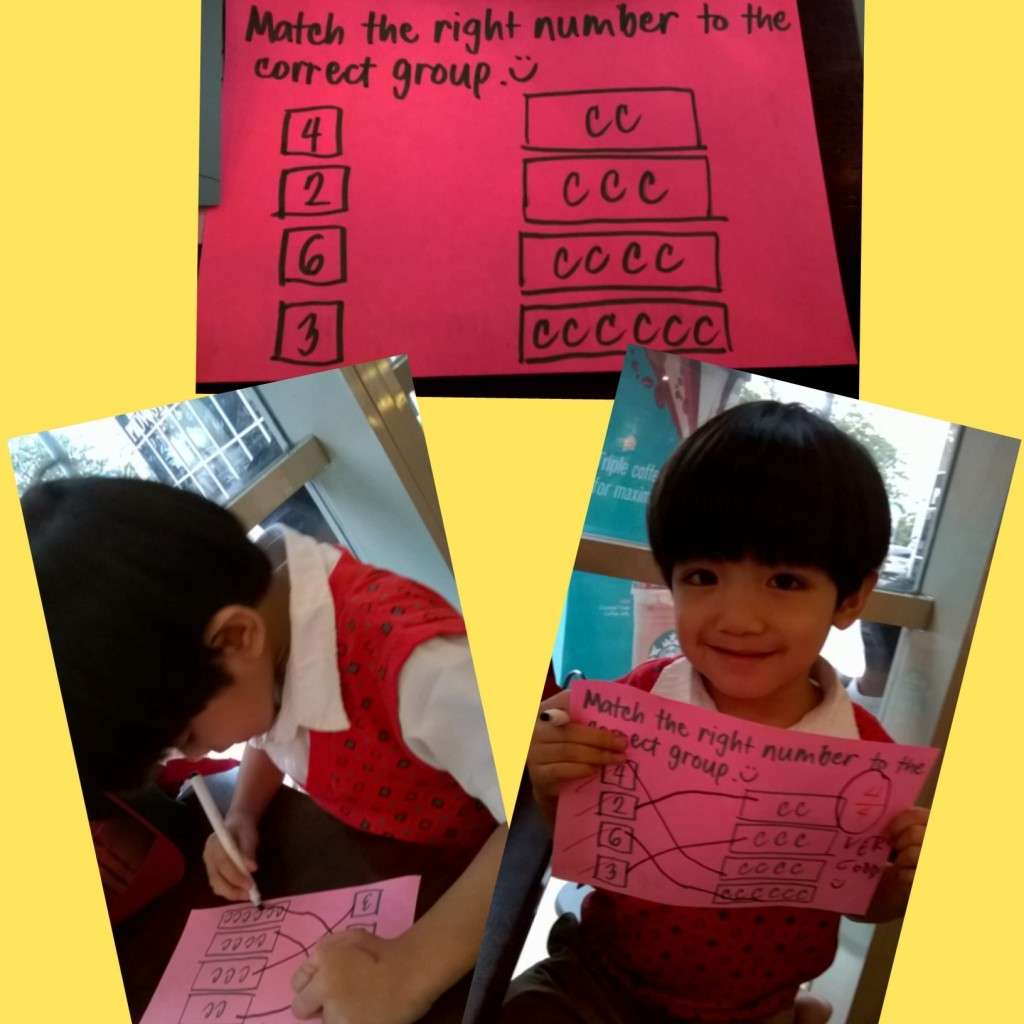 As I mentioned earlier we focused on the Creation Story so we did daily artwork about it using paper plates, foam, stickers, and cotton. 🙂 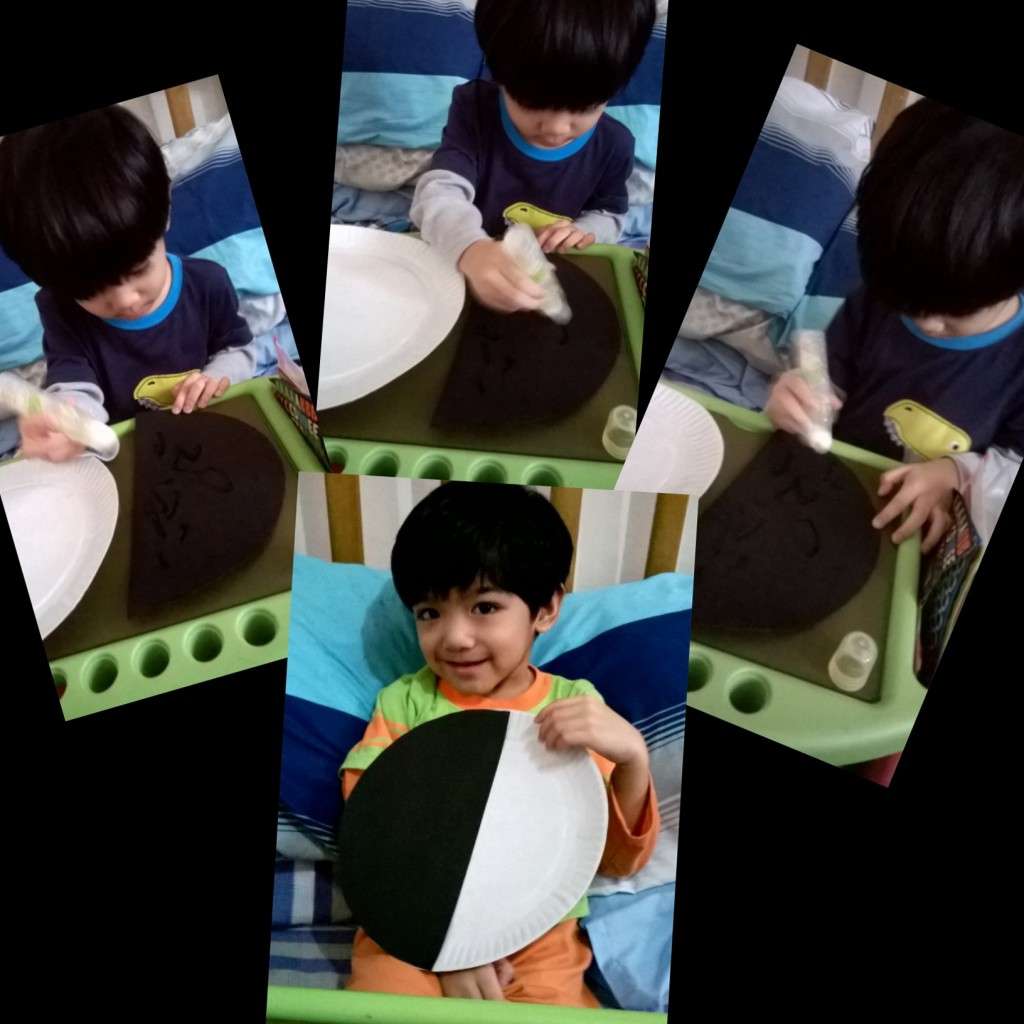 6 And God said, “Let there be a vault between the waters to separate water from water.” 7 So God made the vault and separated the water under the vault from the water above it. And it was so. 8 God called the vault “sky.” And there was evening, and there was morning—the second day. 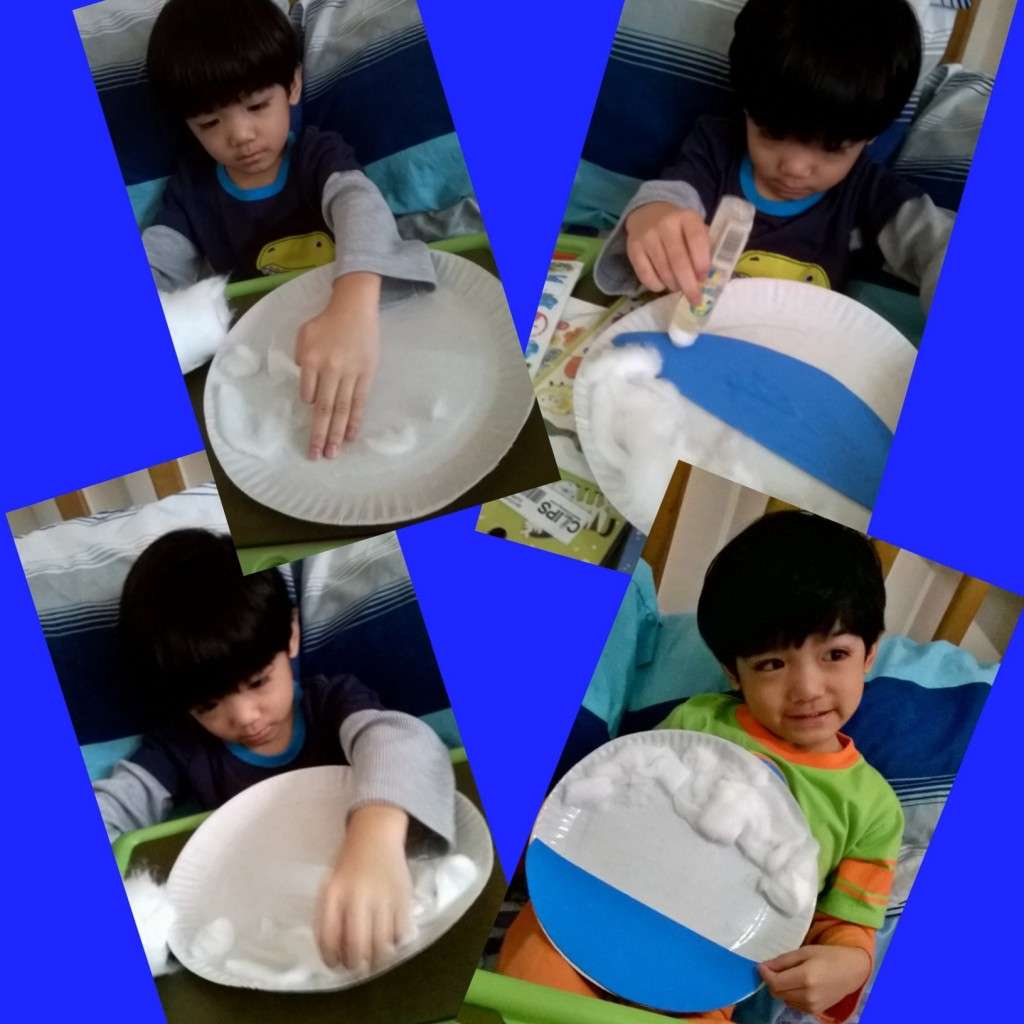 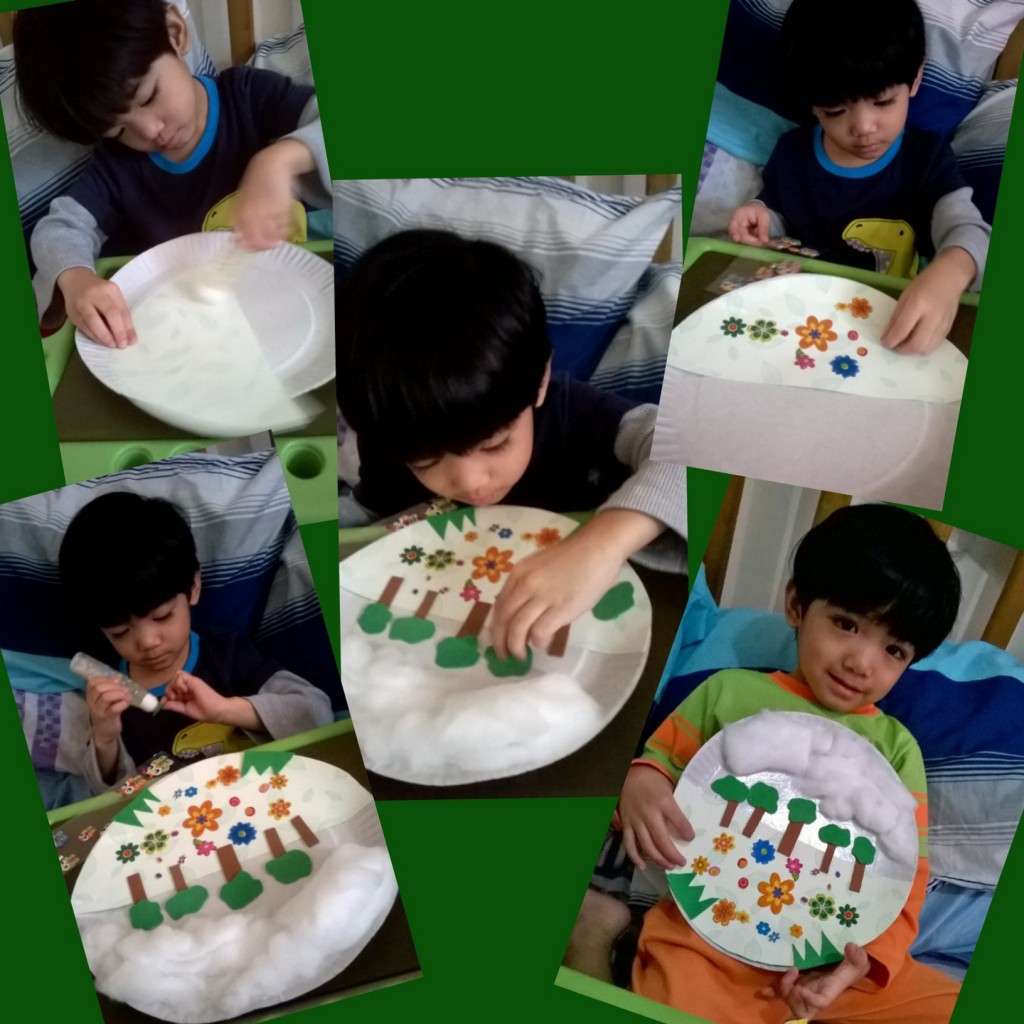 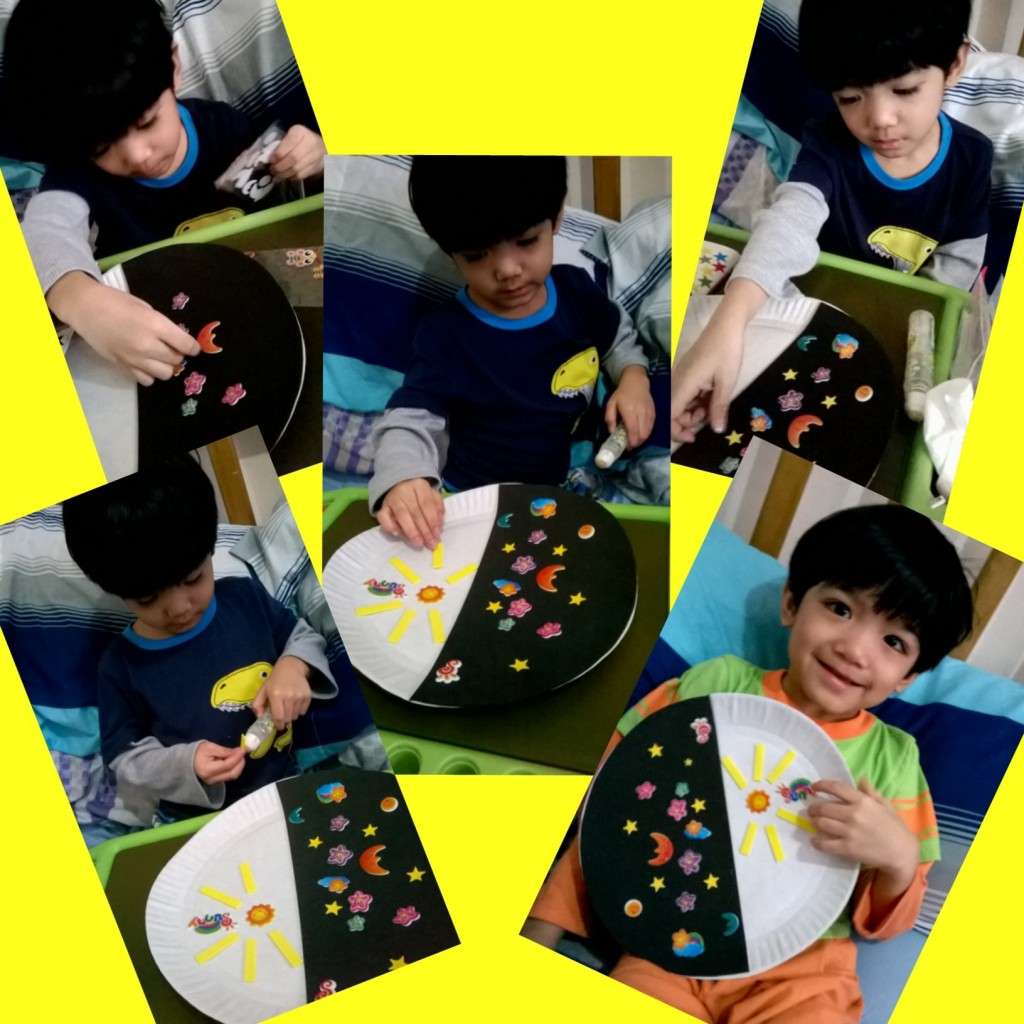 20 And God said, “Let the water teem with living creatures, and let birds fly above the earth across the vault of the sky.” 21 So God created the great creatures of the sea and every living thing with which the water teems and that moves about in it, according to their kinds, and every winged bird according to its kind. And God saw that it was good. 22 God blessed them and said, “Be fruitful and increase in number and fill the water in the seas, and let the birds increase on the earth.” 23 And there was evening, and there was morning—the fifth day. 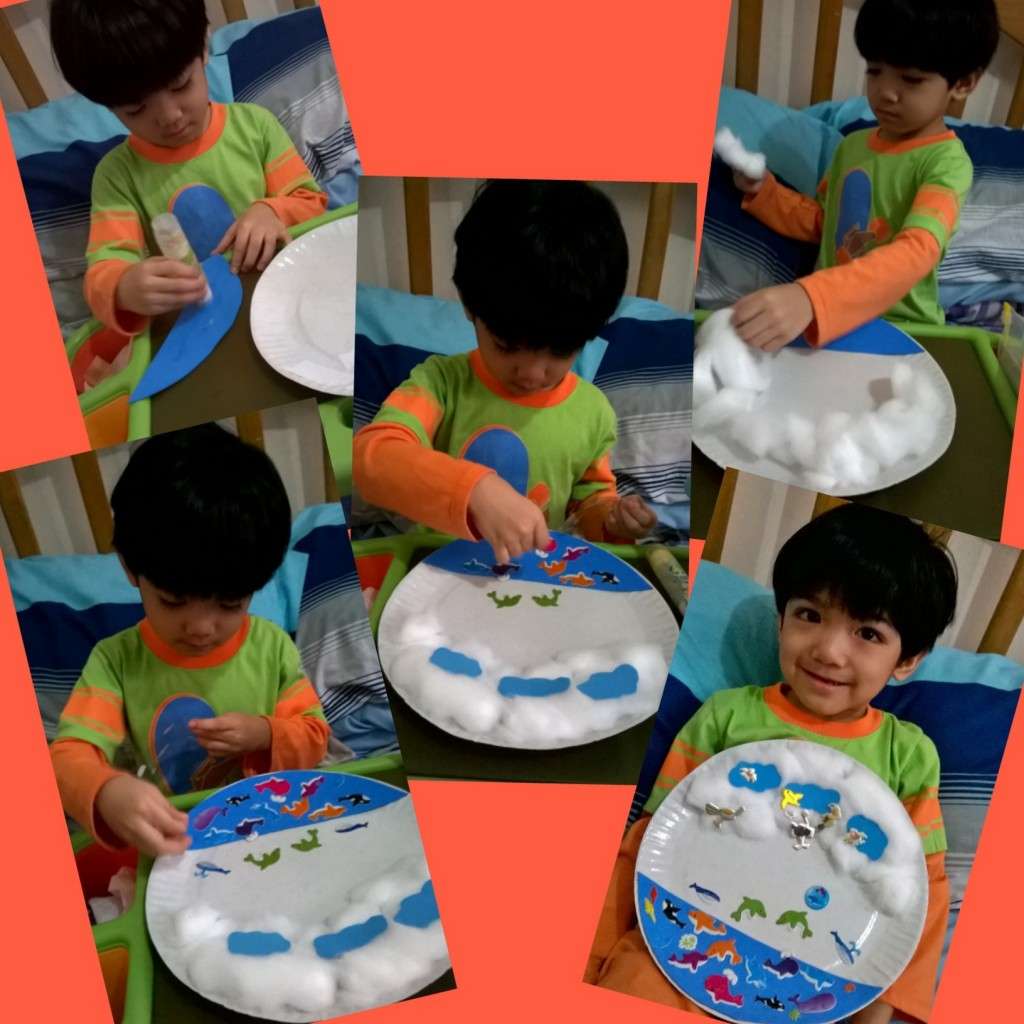 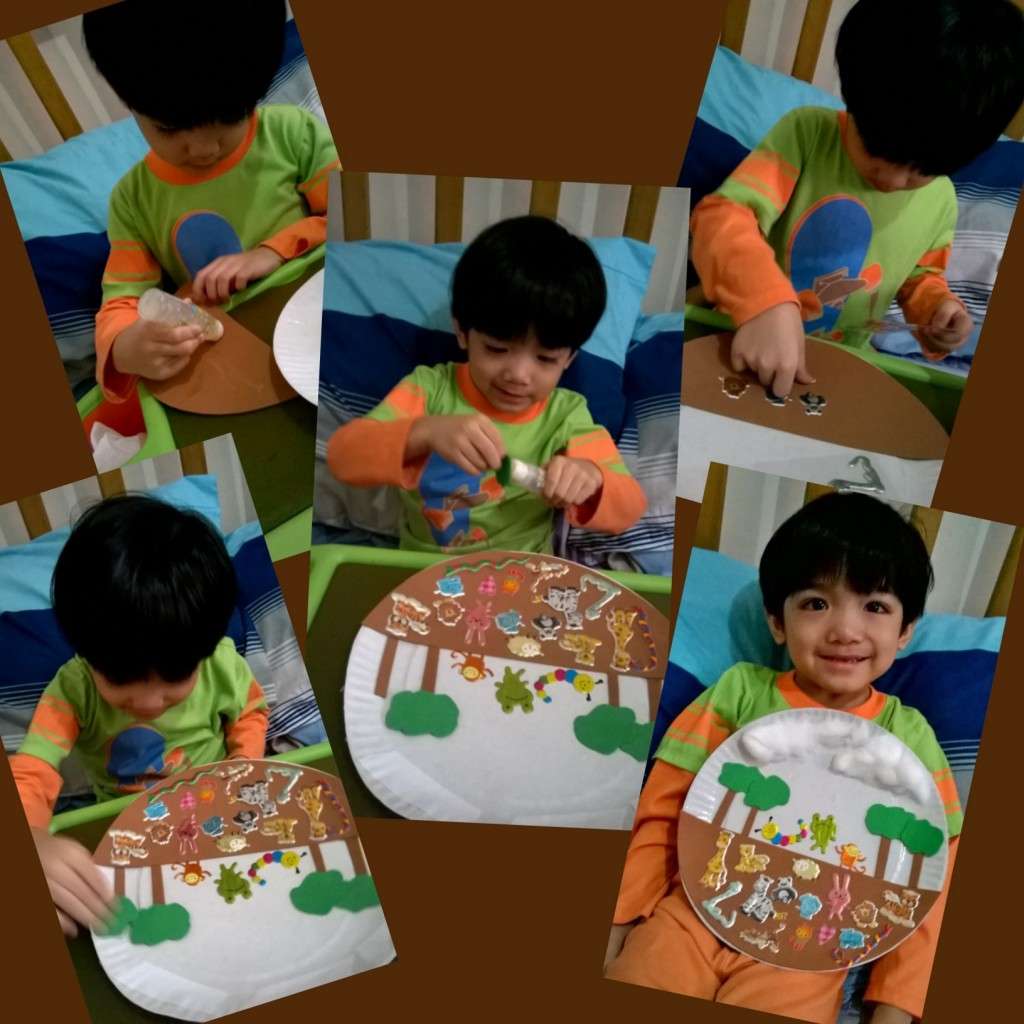 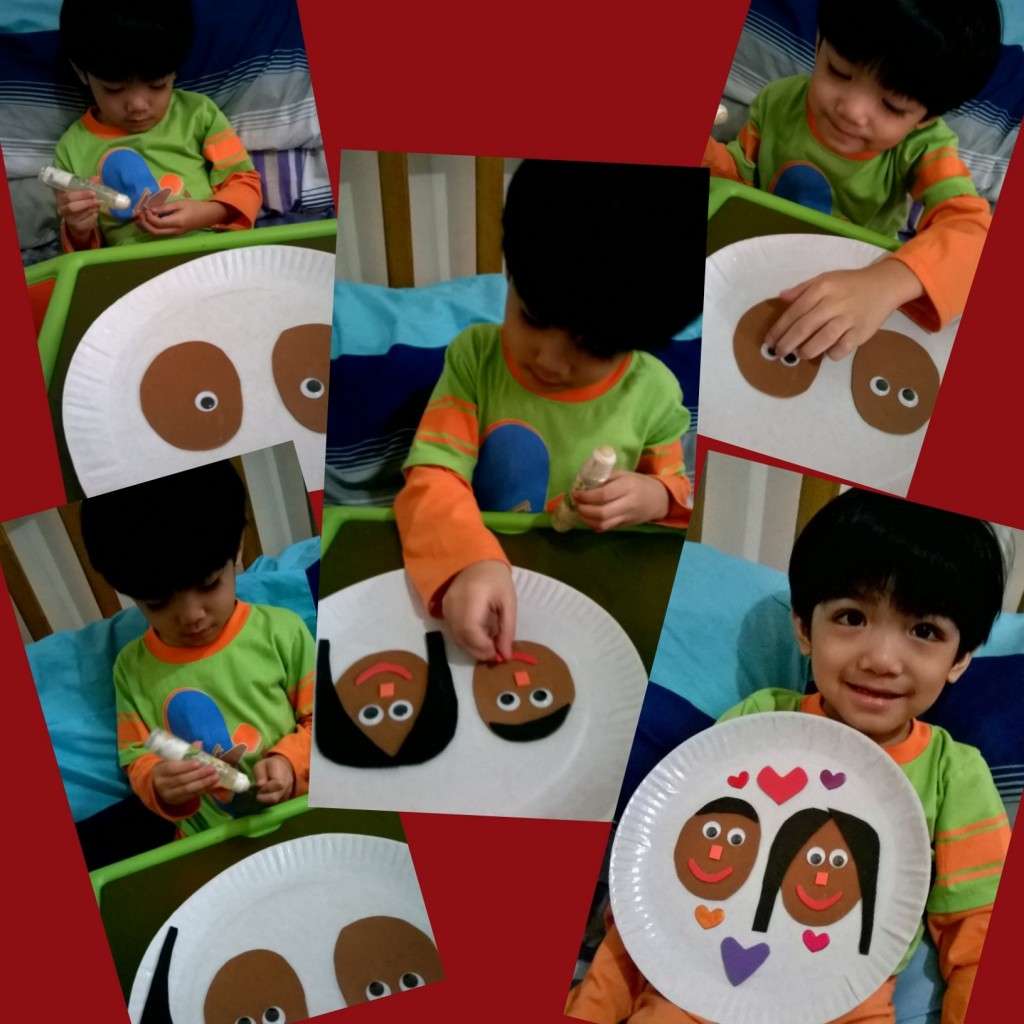 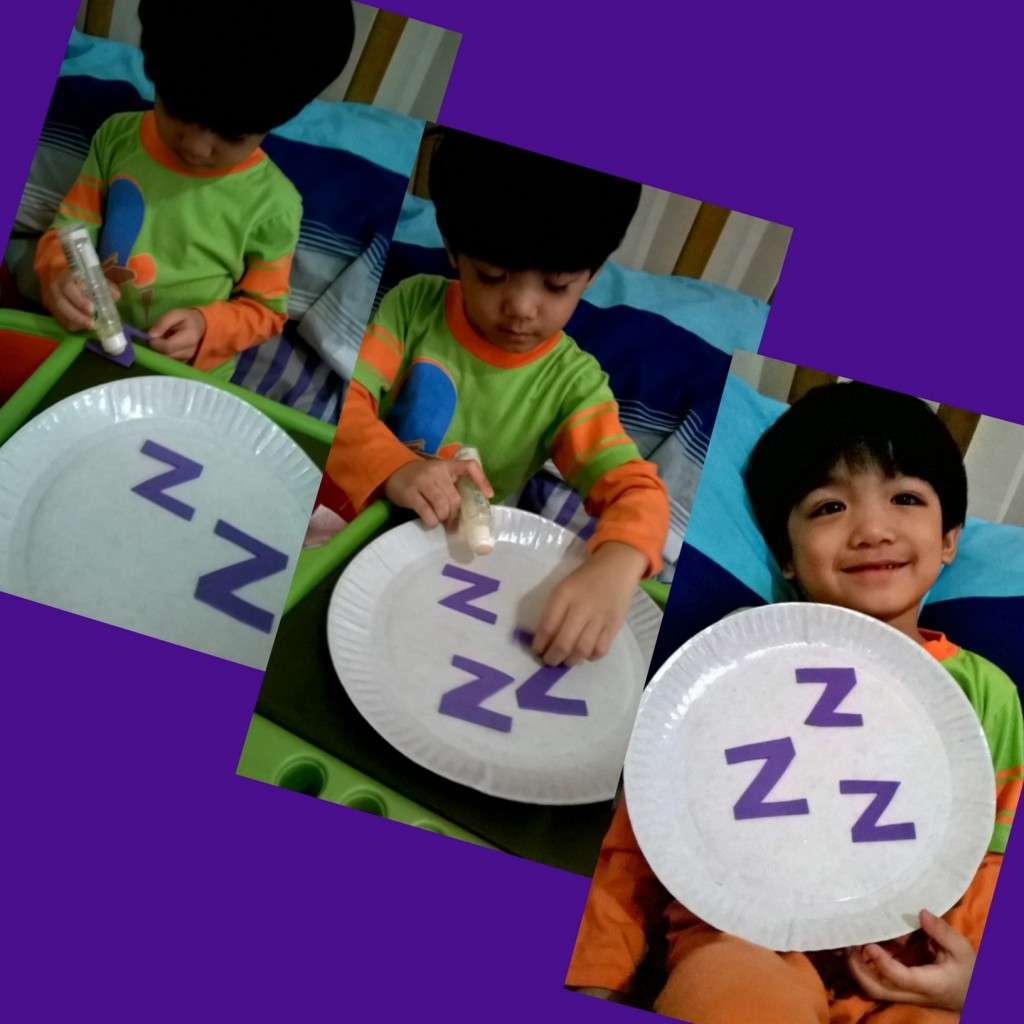 And that’s a wrap for our C week! Hope you’ll enjoy these activities as much as we did! 🙂 I still don’t know how to frame or display Timmy’s artwork but we’ll definitely put it up on our wall. 🙂 Watch out for our W week in my next blog! Ciao!