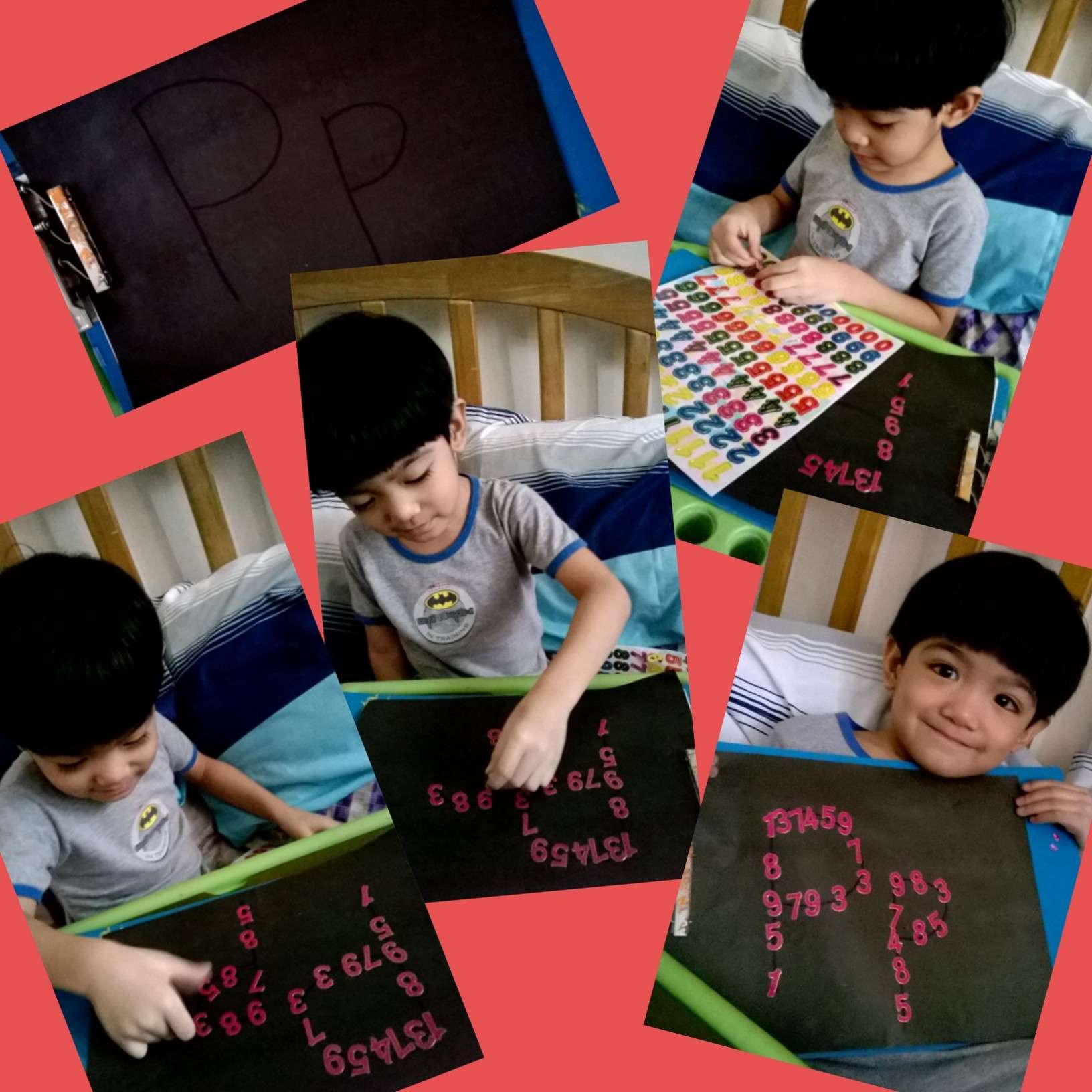 P is for Playoffs

When we had “P” as our letter of the week, it was the beginning of the NBA Playoffs. 🙂 Haha! My husband loves basketball and my son is crazy about it, too! He would rather watch the Top 10 Plays of the great NBA players than watch kiddie videos on YouTube. 🙂 He knows all the NBA teams and even the jersey numbers of the players he likes! Later on you will see how that love for the game got mixed with our letter of the week! Here’s how we managed to pull off some activities despite being distracted with the Playoffs. 🙂

Our “P” book pile was pretty awesome. 🙂 We’re Mo Willems fans and his Pigeon books series is one of our favorites so it’s laugh trip all over again! 🙂 One of the best deals I found in a thrift bookstore is “Punctuation Celebration.” It’s a huge rhyming storybook that explains the uses of punctuation marks in a fun way! 🙂 “Perky Little Penguins” is another favorite and Guy Parker-Rees is one of the illustrators we really love. Timmy liked my baby seal pup (one of the characters in the book) voice so much that he would make me do it the entire day. Haha! 🙂

“Pirate Piggy Wiggy” is a gift from my friend the Hippomum and Timmy has a pig stuff toy that looks exactly like him! “Prayers for Boys” and “I can say a Prayer” are great books for teaching kids how to pray. “Pancakes for Breakfast” by Tomie dePaola is a cute and tiny storybook that has no words so it allows you to make up all sorts of storylines! One of the best sound books we bought is “Polar Bear, Polar Bear, What Do You Hear?” The animal sounds are so real! “Curious George: Pat-A-Cake” has been with us for two years now and it never gets old. 🙂 “Percy and Harold’s Big Race” is another fun book that teaches a lesson on humility. 🙂 “Your Personal Penguin” is an adorable Sandra Boynton classic we love!

For our Bible Character for the week, we read about Paul’s (previously known as Saul) story. 🙂 We learned how God uses different people (in this case, a certified Jesus-hater) to spread the Good News. We also looked at the story of Paul and Silas and how God used an earthquake to free them from prison but instead of escaping they stayed put. This led to the warden believing in Jesus Christ. 🙂 These are the videos we watched to supplement our Bible story. 🙂

I’m a sticker-hoarder. 🙂 I usually buy the cheap ones for random activities. The expensive ones, I keep for scrapbooking. Haha! Anyway, stickers come in very handy especially when you need something that will keep your little one busy. The peeling of those tiny stickers are great for fine motor skills, too! For this activity I asked Timmy to outline the big P and small p using Pink numbers! 🙂 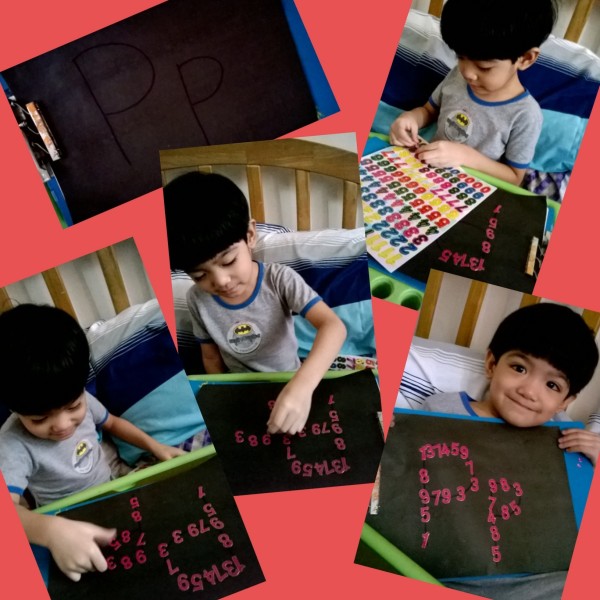 P is for Playoffs! As I mentioned earlier, when we did this letter it was also the start of the NBA Playoffs. Timmy got so obsessed with writing the name of the Players, teams, and scores! Haha! As a mom, I couldn’t ask for more. Tallying scores lets him Practice his letter and number writing! So I was like, “Keep tallying, darling!” 🙂 I indulged his make-believe matches and scores. 🙂 You will see there that he used the short name of the teams the way it appeared during the game. He also wrote the teams’ full names from time to time. 🙂 I think he misses the Miami-Indiana match up that’s why it’s still there. 🙂

At some point, he was determined to spell Cavaliers player Matthew Dellavedova’s name correctly and we Practiced that for weeks. Haha! Too cute! 🙂 He watches a lot of NBA highlights during his 1-hour gadget time, which explains why he knows retired player Allen Iverson. 🙂 Although I think he just invented his jersey number below. 🙂 He likes Michael Jordan, Dwyane Wade, Stephen Curry, Matthew Dellavedova, and of course LeBron James. 🙂 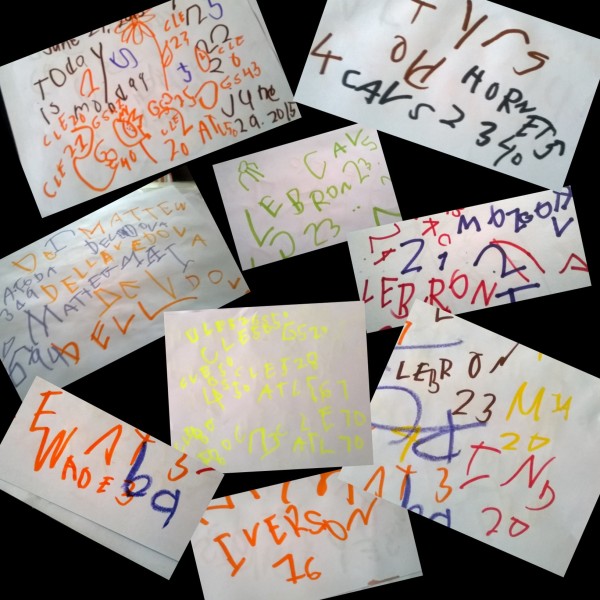 P is for Practice (special shoutout to Iverson–only NBA fanatics will get this)! There are days when he still finds tracing and writing within the lines boring so I just let him practice writing in boxes or just filling up the paper with the same letter. 🙂 I didn’t put an incorrect mark on his imperfect P’s. Perfection isn’t our goal so I just showed him the adjustments he needed to make to make the P look better. 🙂 The last thing I wanted was for him to get discouraged because his writing was far from what the ideal letters looked like. We celebrate his writing milestones and downplay his mistakes. 🙂 I still correct it but my emphasis would be on working on his strokes rather than telling him that he did a letter wrongly. 🙂

We also did another writing Practice game. I would ask him to stick some random letters on the paper and come up with words that begin with that letter! 🙂 He really liked that activity. 🙂 That “Katy” there is from his book “Katy No Pocket.” He was pretty much ambitious with J as he spelled “Jugling.” I told him I really appreciated his effort! 🙂

We are into Patterns lately so I made a number pattern game for him. 🙂 Just recently, we’ve been doing shape patterns since he’s able to draw squares and triangles now. Yay! Before, he only used to draw circles and it’s impossible to make a pattern game with just one shape. Haha! He learned to write numbers and letters first so that’s what we’ve been using for his pattern games. 🙂 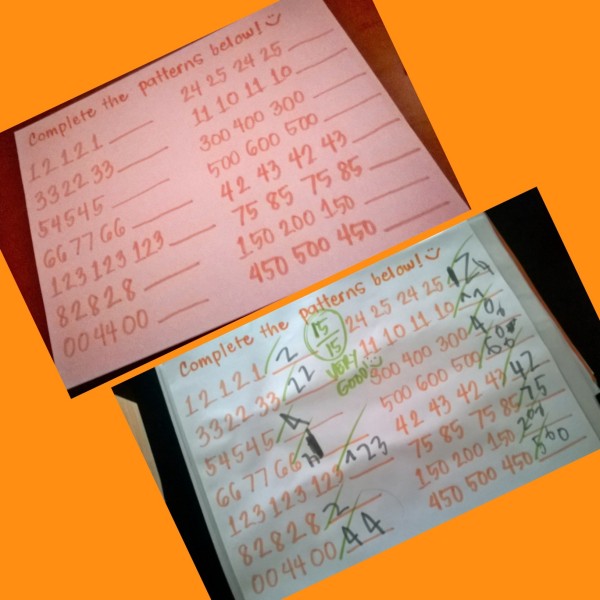 I mentioned in my previous LOTW post that Timmy’s into odd and even numbers. 🙂 To make it more exciting, I asked him to put stickers instead of writing them! 🙂 Repetition reinforces learned concepts and that’s what we were doing here. 🙂

P is for Paw Printing! At first, I told Timmy to dip his dinosaur’s feet on the Paint. My son loves dinos which is why we opted to use them instead of his other animals. However, their paws are oddly shaped and not everything gets painted. I asked him to just paint each foot before stamping them on the paper. 🙂 It was soooo fun to do! 🙂 He got so focused carefully painting those tiny dino feet to get their unique prints on paper! Good job, sweetheart! 🙂 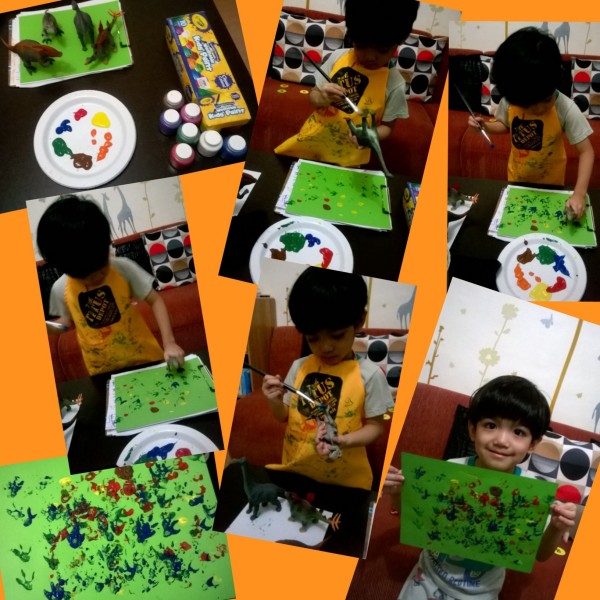 The common theme for P would be P is for Pig but it was more important for us to go with Timmy’s interests like basketball, patterns, and dinos. 🙂 He enjoyed this week a lot and so did I! 🙂 What’s your child’s interest lately? Incorporate it with your LOTW activities! 🙂 Thanks for reading! Till my next blog! 🙂