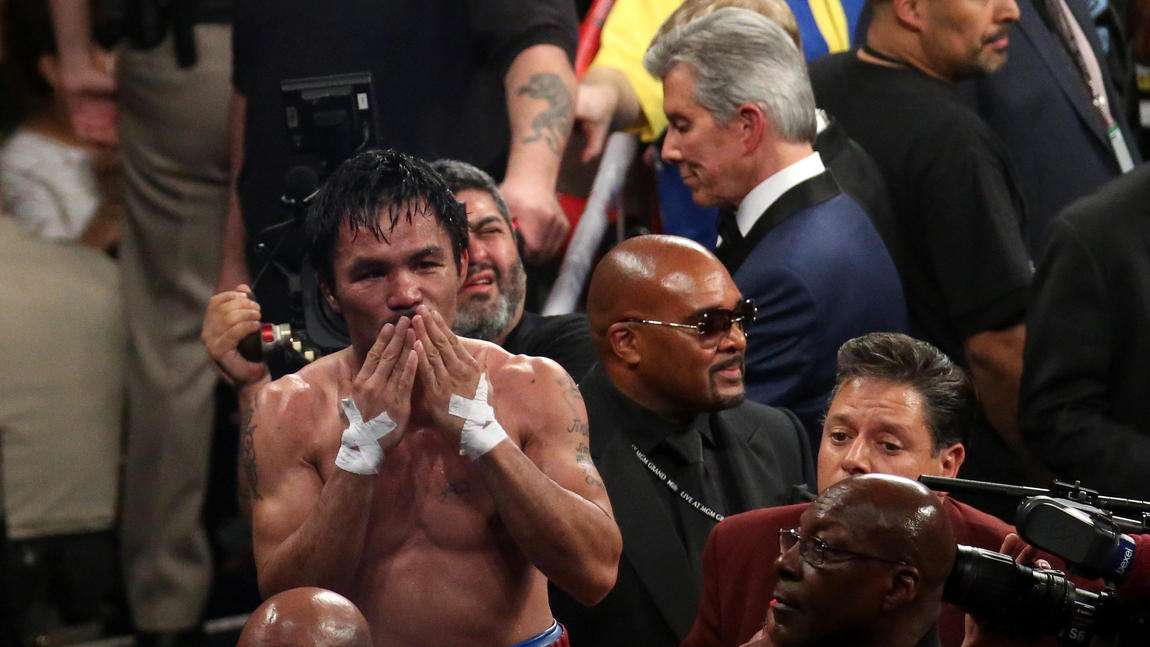 In the News, Sports

I watched the fight multitasking. I was clutching a pillow, scrolling through Twitter, and hugging my 4-year-old son who got surprised every time the men in the room shouted when Manny landed a punch. Every round was stressful and nerve-wracking. Before the fight, we prayed for Manny Pacquiao to win. We rallied for him in social media. As a nation, we were so pumped up to watch him defeat Floyd Mayweather. But when the fight started, we all knew that it would go down to the wire. And it did!

The Fight of the Century reached 12 rounds and when it ended I felt blah. See, I can’t even describe it properly. Both fighters fought well but it fell so short that underwhelming is even an understatement in my opinion. This match was so hyped that it raised the expectations so high that Manny and Floyd couldn’t reach it. Here’s why:

We wanted blood and bruises, we got scrape-free faces

Everybody expected a dog fight. Fans of both parties wanted their opponents to be photographed with fifty shades of black and blue. But no, both fighters looked like they just came from a sparring practice. There were no stitches or blood. I’m not a boxing expert but based on what I saw, the flow and dynamics of the fight didn’t dictate such an outcome. One was calculating and the other was trying to catch a slippery opponent. If you have one party dodging a lot, you simply can’t expect a slug fest. And for most of us, it was a major letdown.

We wanted more punches, we got more hugs

And a million memes to go along with that. As Pacquiao fans, we wanted him to be more aggressive. We wanted Mayweather to stop hugging our hero. But from Manny’s point of view, he punched enough. He was also cautious because he didn’t want to get knocked out. Mayweather is a strategist and for Manny to go all out and attack him would be careless and stupid. So if he said he did his best then let’s take his word for it. I believe Manny knew what he was doing. He is an experienced fighter and a champ. As for the hugs? I can only say the same thing. Money knew what he was doing, it was part of his strategy, and yes, it made him look like Olaf but at the end of the day, he won within the rules of the game.

We wanted Manny to win, we got Money declared as champ

I don’t know with you but when the final bell rang, I only had one thing in mind—Money won, Manny lost. It was a bitter pill to swallow. Sure Floyd danced the night away but he threw and landed more punches. And sometimes that’s all you need to see. Was he the better fighter? That’s for the real experts to decide. From what I saw, he looked scared at some point. His father was even nervous to the point of asking his son, “What’s wrong with you?” But that didn’t stop him from sticking to the plan. Manny did his best to get in but I think he was also trying his best to avoid a counterpunch that will knock the lights out of him. I think he made the most of the openings he saw. Freddie Roach also told him, “Don’t walk right into it.” And he was wise enough not to.

For both fighters it was a balancing act all the way. No one went all in, not in the fans’ standards anyway. It was a battle of who outsmarts who. I’m a Manny Pacquiao fan but I wouldn’t even say that it was a close fight. From a literal stand point, Money was too far most of the time. Too far to be reached, too many hugs, too many elbows, too many dirty plays. But despite all that, I also saw Money landed more punches than Manny. And I’m not a boxing expert; I’m a stay-at-home, full-time wife and mom. I have 20/20 vision and I’m not delusional. It sucks to even say this but Money won because he did what he had to. Not in the way I like it but he found a way to win within the rules and in any game that’s all that matters.

Manny looked more careful to me but I’d like to think that he also stuck to his game plan. He didn’t go there careless and brash. He, too, was calculating albeit more aggressive. Maybe he should’ve done more but maybe doing more would’ve gotten him KO’d, too. So I’m with Manny when he said he really did his best but it wasn’t good enough.

The fight we’ve always wanted is over. It didn’t meet our expectations but at least we finally saw it. It reached 12 rounds with both fighters sizing each other up to the very end. It was a good fight but not a great one. It was like a story without a climax but still worth telling. From the moment the bell rang, we had a calculated boxing match. And maybe that’s really all there is when you’re fighting an opponent who wins with that strategy. Hats off to Floyd for remaining undefeated and winning the way he best knew how.

And for Manny, you’re still our champion, the pride of the Philippines, the hero that brings our nation together in a way that nobody else can. We’re proud of you. My son even wants to be like you. We’re still not on the same page in terms of a boxing career, though. Haha! But on the character side, yes. 🙂 I know that when you watch the fight again you’ll see that Money won. It may be hard to see that immediately after the fight but I know you’ll come to terms with that. But I am happy that during your post fight prayer service you acknowledged that God’s ways are higher than ours and you have peace of mind. 🙂 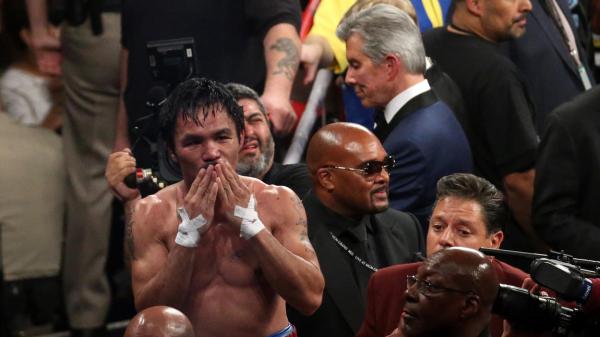 This loss is nothing to be ashamed of, you fought a good fight, you made Mayweather think twice, and you escaped some nasty blows. You’ve proven to all of us time and time again how great of a fighter you are. So stand tall, champ! God has already given you the platform to show the world that He can make a world-class fighter out of nothing. And you have shown that last night. A third-world fighter in a first-world country battling a first-world boxer. We couldn’t ask for more. Thank you for fighting for our country and for God’s glory. Thank you for making us proud again. 🙂