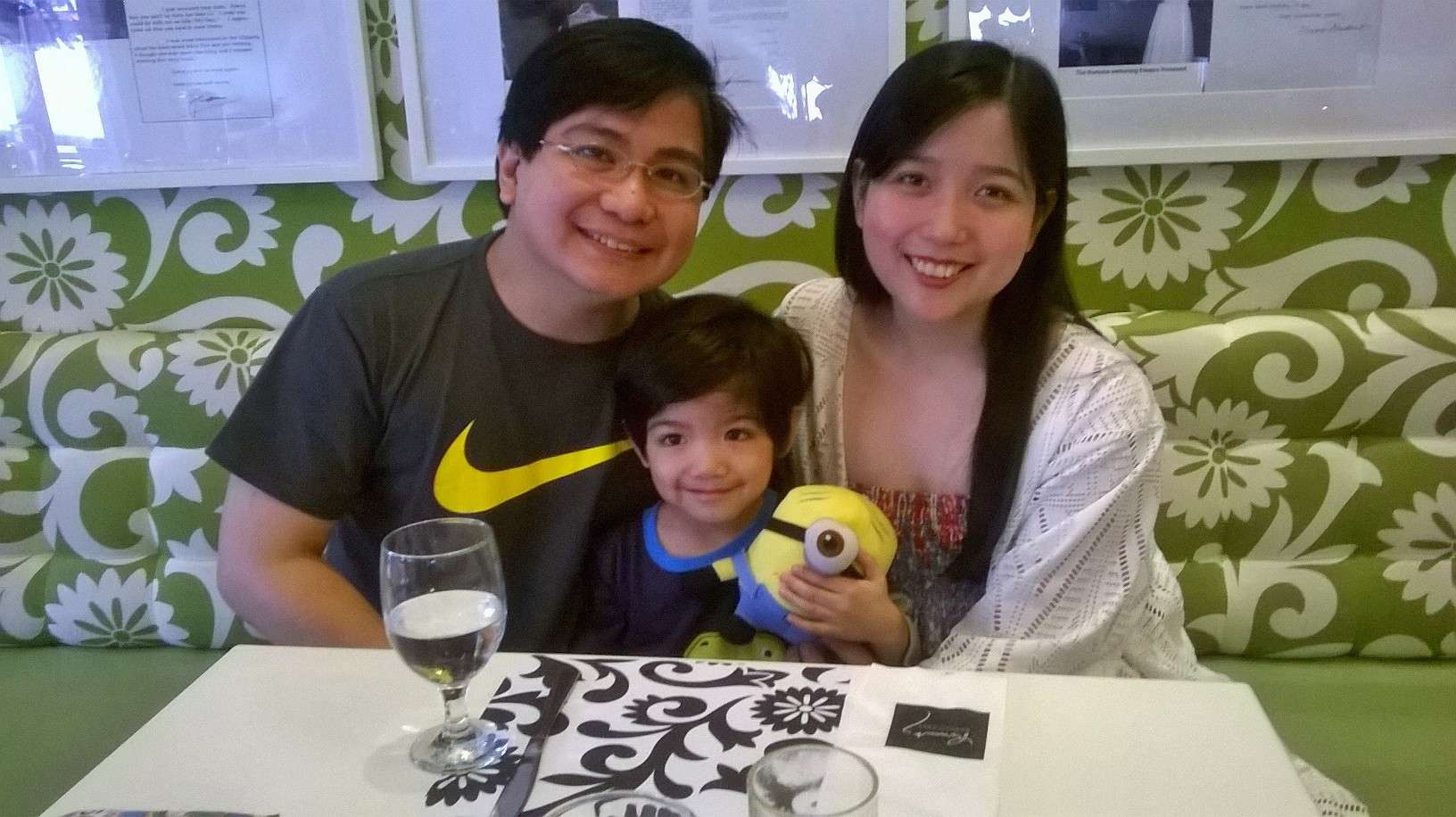 Last week, my husband and I had our annual the-year-in-review tradition. We used to do it on New Year’s Eve or early morning of January 1. This year, we spent a quiet afternoon at a restaurant recounting God’s goodness and faithfulness in our lives. It was also the time when we set goals for ourselves and our family.

This is one of my favorite bonding moments with Omar. I love hearing how his year went even if we’re together every single day. 🙂 It amazes me how God works in us differently and how when we put our year-in-retrospect story together we see the big picture. So for my first blog for the year, I’d like to retell two different stories from two different people but with one predictable ending. 🙂

I actually came more prepared this year with our throwback tradition. I had an outline on my phone so that we don’t lose track of the things we need to talk about. 🙂 When I asked him the highlights of his year he gave two things—his career and his hobbies. I really enjoyed listening to him about how these two areas made the most impact on his year.

First up, my husband landed on a job that involves writing about superheroes. That kind of career is a match made in comic book heaven. I mean he gets paid for writing about the stuff he loves! He not only loves superheroes but his knowledge about comic books is a product of decades of reading and collecting. Comic books were the only gifts he wanted as a child. Sometimes when he tells me all these back stories about the Flash or Captain America, I find myself really impressed at how he remembers all these events. He even stopped reading and collecting twice! The first sabbatical was for 2 years while the other one was for 11 years but it still looks like he never left the comic book scene! He’s very patient with my questions after we watch superhero movies or TV series. During those times, I silently thank God for letting me marry a comic book connoisseur. 🙂

The way this job came was heaven-sent. Prior to that, Omar was writing devotionals for a Bible app. We thought that this will go on forever but a day prior to his first year with his employer he was told that the devos he wrote would simply be recycled for next year. In short, they just needed a year’s worth of inspirational writing. This is one of the risks of being full-time, home-based writers. There will be days when the projects will eventually end.

I was never really anxious that he lost that job. When I told him that I supported him on going freelance, I meant it—risks and all. Even full-time employees get laid off so this was no different. I’ve always believed that God will open doors for my husband because He designed him to provide for our family. Plus, time and time again Omar assures me that I need not worry about finances because that’s his job. And I took my husband’s word seriously. I also know that he wouldn’t settle for something that only pays the bills. He’s a strengths-based kind of guy and believes in doing only the things he’s good at. That mindset actually paid off. 🙂

Unlike other husbands who can take on any jobs, Omar has decided early on that he’ll do what he does best. He’s a great teacher and his students can attest to that. But after 11 years of teaching art and values (part-time and full-time) God has led him to a different direction. He has a book in the works but I guess for him to really finish it, he needed to brush up on his writing skills thus the complete shift to a writing career. He still teaches art to homeschooled kids but not in a classroom setting anymore.

He’s a very niche writer and would only take on projects that interest him. Unlike me, I can write anything from digital marketing to the mysteries of Stonehenge. His decision to stick to his specializations has landed him the most suitable projects for his skills. And this by far is the best. He saw this job opening for a comic book writer and contacted the employer even though he was looking for someone from North America. Omar had to prove his knowledge about comic books and immediately got the job the same day! Praise God! Basically he writes comic book news and blogs, maintains his employer’s website, and manages his Facebook page. When he lost the app job, his comic book employer gave him a substantial increase that more than compensated for what he lost. God’s timing is truly amazing! 🙂

This writing job also revived his love for comics and controlled collecting. 😉 He also got involved with a comic book group that allowed him to get in touch with like-minded individuals. During our date I told him that I’m so happy he found that group because it’s great to see him hangout with people who shares his passions and interests. Sometimes their insights helped him with his job, too! I even told him that I’m thrilled that he gained new friends last year. 🙂 I also told him how proud I am that he was firm in his resolve to do what he does best and not settle for anything less. God graciously honored his decision. 🙂

The highlights of my year also involved two things—moving out and homeschooling. 🙂 For more than a year, we’ve been staying with my in-laws. The decision to move in with them came about the change in my career back in 2013 when we agreed not to accept the change in terms and offer in my consultancy job. It basically shook our finances so we had to give up our apartment.

I’ve been very blessed to have the kindest and most accommodating in-laws. We never had any conflicts unlike other horror stories I’ve heard from other people. My mother-in-law taught me how to make adobo and fried chicken the way Omar likes it. He eats my own recipe but sometimes he requests for his mom’s recipe so I took time to watch his mom and learn from the queen of the kitchen. 🙂 I also learned other cooking and organizing tips from her.

We initially thought we can move out by the end of 2013 when my in-laws came back from Canada. Then we told ourselves that we wouldn’t stay there for a year. I mean they were not asking us to leave. It’s just that we don’t want to overstay and change the dynamics of their household for so long. Having a toddler around also changes everything. However, God had other plans. Seeing that we hadn’t saved enough to move out from my in-laws’ place, I completely surrendered by desire to have our own place. I told God that I will gladly wait until I’ve learned the lessons He wanted me to learn during our stay there (even if takes years!).

Not long after, God’s provisions came and over the next six months we were able to save for our new apartment and furniture. We sold everything when we moved to his parents’ house because first, we needed the money and second, their place is fully furnished. God also blessed us with a great apartment that’s close to a mall! 🙂 And I mean walking distance kind of close. 🙂 Having our own place again opened my eyes to the privilege of managing your own home. God made me realize that fixing our home, cooking for my boys, scheduling how our day goes, and doing the simplest chores are the very things that give me joy. 🙂 Sure life was easier when other people do things for you. But life is more fulfilling when you do things for other people. I now understand why my mom did what she did. Why all her life she devoted it to taking care of us. Being a homemaker is a job that gets daily rewards. Aside from the unlimited hugs and kisses, the growth you see in your child’s life and the success you propel in your husband’s career—all done in the background—are the intangible trophies you carry in your heart. 🙂 God gave a whole new meaning to my full-time jobs as wife and mom when we had our own place again.

And then there’s homeschooling. 🙂 I’ve been homeschooling Timmy since he was born because teaching really starts at home. Last year, though, I’ve been more intentional in researching what I could teach to him like working up his fine motor skills, letting him do more art activities, progressive reading, and more. Most 3-year-olds go to nursery, Timmy basically “learned through play” at home. We also got involved with a homeschool group which met every Tuesday. It’s really a class for music, arts, and P.E. and we joined just for socialization purposes. In the end, I got more than what I signed up for. 🙂 Timmy gained new friends, I had new mommy friends who have been generous in sharing their knowledge and experience, and we got lots of homeschooling support. We even had an amazing Christmas party at an orphanage!

There were moments when I was second guessing myself about homeschooling knowing that I have a naturally shy boy. But seeing his development now, I realized that building his confidence at home helped him adjust more easily outside instead of thrusting him into a foreign environment like in a school setting where other kids expect you to behave like everybody else. I’ve read this before that homeschooling allows your child to feel secure and confident with the love and attention you give, allowing him to thrive in any environment. The child knows that he is loved and accepted at home and so validity from peers becomes secondary. Their values are not easily swayed because they are firmly built at home. Now, his warm up time is relatively shorter from hours to minutes and he can play and interact with other people already. We also tell him ahead of time the new friends he will meet and that we’ll be there, too, to help him adapt quickly. 🙂

Homeschooling has allowed me to know my child more. It’s not a given that as a mom you know everything about your child. I’ve learned the best way I can get him to obey easily and the most effective way for him to enjoy learning—all tailored to his personality and interests. I am humbled every day whenever I teach Timmy. My character is being molded, too, especially when I have to deal with his stubborn and lazy moments. Or when I needed to deal with his distractions and shift in interest. There are days when I had everything planned and then he wanted to do something else. I’ve learned to become flexible and maximize that moment of eagerness to teach as much as I can about his current interest. Homeschooling added a new dimension to my homemaker life, making it more fun and exciting every day! 🙂

Our year ended with handprints of God’s grace all over it. 🙂 Our family life and home-based careers are testaments to God’s goodness and faithfulness. We couldn’t be more grateful for what God has done, is doing, and will do in our lives. We’re excited for 2015 because we know that whatever blessing or trials we’ll encounter, His grace is more than sufficient to carry us through. I’m sure we’ll have new lessons to learn and new adventures to experience. The unpredictability of it all excites me! With that, we say goodbye to 2014 and say hello to 2015. 🙂 Happy New Year, everyone!